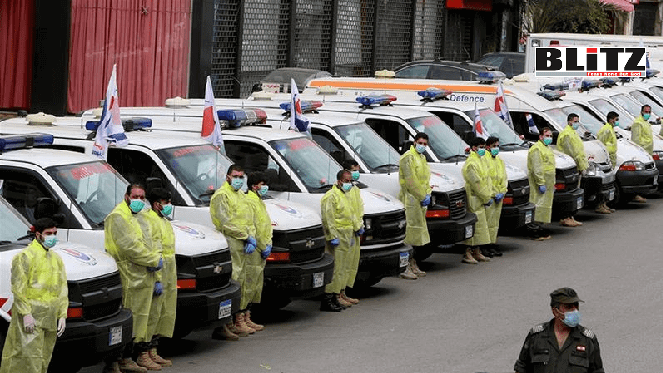 The coronavirus pandemic has turned into a serious challenge for the Iran-backed Lebanese terror organization Hezbollah, placing the world’s most heavily equipped non-state armed group under strain. Nevertheless, recent reports indicate that these conditions have not stopped Hezbollah’s ongoing military and terrorist activity in the region.

Three locations along Israel’s security barrier on the Lebanese border were sabotaged on Friday, April 17, likely by Hezbollah operatives, in what appears to have been an attempt to infiltrate Israel. No breach was detected.

That event appears to have been a direct response to a dramatic incident that took place last Wednesday in Syria. According to international media reports, an Israeli airstrike hit a jeep carrying Hezbollah operatives who may have been involved in weapons trafficking from Syria to Lebanon.

This does not mean Hezbollah is not facing new challenges. The first is rooted in the distress the coronavirus is causing its patron, Iran. The Islamic Republic is suffering high infection and mortality numbers, its economy is in crisis, and its embattled regime is trying to fend off charges of covering up and mismanaging the pandemic.

Hezbollah’s mammoth arsenal, estimated by the IDF to be at around 130,000 surface-to-surface projectiles, is paid for by Iran and its Quds Force. Hezbollah’s arsenal consists primarily of short-range Katyusha rockets with a 45-kilometer (28-mile) reach, but also includes more than 3,500 projectiles that put greater Tel Aviv in range and carry 150 kilogram warheads. The arsenal also includes more than 200 long-range ballistic missiles that carry half-ton warheads. These missiles can strike any point in Israel.

Israel’s air defenses, made up of the Iron Dome, David’s Sling, and Arrow systems, can stop many projectile attacks, but would be flooded by the scale of Hezbollah’s arsenal in any full-scale conflict, meaning that some of Hezbollah’s attacks would invariably get through. The attacks would paralyze the Israeli home front and economy, and if symbolic or strategic sites are targeted, could cause significant harm to critical national infrastructure. Hezbollah also has a number of anti-ship cruise missiles and air-to-surface missile batteries.

Iran and Hezbollah had planned on establishing a domestic precision-guided missile industry in Lebanon that would enable the serial production of a large number of missiles. They appear to have frozen this project following a series of Israeli warnings to desist or face military action. The more Iran struggles to pay for such activities, the more constraints Hezbollah will face.

In addition, Iran’s newly appointed Quds Force Commander, Esmail Qaani, who replaced Qassem Soleimani following his killing by US drone strike in January, means Hezbollah’s leadership is now working with a less charismatic and influential Iranian commander. While the Quds Force is expected to continue to make every effort to equip Hezbollah with a range of weapons, the dynamic between Hezbollah leader Hassan Nasrallah and Qaani is an unknown quantity that could affect future cooperation.

In Lebanon, Hezbollah’s home turf, the organization has faced accusations of importing the virus via flights from Iran. Brig. Gen. (ret.) Yossi Kuperwasser, former head of the research division in the IDF Military Intelligence Directorate, told the Investigative Project on Terrorism (IPT) that international flights out of Iran reportedly helped spread the disease in the Arab world, putting pressure on Hezbollah in Lebanon.

“Hezbollah is under pressure both because of the virus and because of its links to Iran,” he said. “Iranians continue to be active in Lebanon. Hezbollah operates in close proximity with Iranians in Syria and in other places. The whole episode reflects badly on Hezbollah. It has led to accusations [in Lebanon] against it.”

Although Hezbollah is using its extensive civilian and military infrastructure to battle the spread of coronavirus, the program has a definitive sectarian nature, since the efforts are mainly underway in Shiite areas of Lebanon.

Meanwhile, Lebanon’s massive economic troubles, which predate the virus, have only grown more acute with the pandemic. Some in Lebanon, like former Lebanese PM Fouad Siniora, blame Hezbollah and its resistance to assistance from international financial institutions for ensuring that there is no way out of those troubles.

According to a report in March in Arab Weekly, Siniora said Lebanon is “sick and requires a stronger medicine than just ointments.” He added that the Lebanese are paying the price of “Hezbollah’s hegemony over the state and its refraining from implementing reforms pledged by the state.”

The report also cited former Lebanese MP Fares Saeed, who said: “Hezbollah is the political decision-maker in the country and, while fighting in Syria, Iraq, and Yemen, it is trying to establish an economic-political system that matches its regional function by overthrowing the Lebanese financial system and removing the country from the international community in the interest of a resistance economy … that is to say, importing goods through illegal channels and relations with Iran and China, in addition to severing all relations with Washington and international legitimacy.”

Lebanon’s economy was on the brink of collapse before the pandemic struck and is in even worse shape now.

“Due to Hezbollah’s closeness to Iran, Lebanon suffers,” Kuperwasser said. At the end of March, Lebanon expressed interest in an IMF emergency loan. Hezbollah appeared to change its tune somewhat regarding the acceptance of aid, but the organization’s chief, Hassan Nasrallah, conditioned any agreement against any terms that “would make the country explode.” Lebanon’s interest mirrors Iran’s own unusual request for a $5 billion IMF loan to battle the coronavirus.

“Banks do not like connections with terror elements. This is one of the reasons why the IMF is not assisting Iran,” said Kuperwasser. “The banking systems in Iran and Lebanon are both contaminated with terror activities. Hence, the terrorism of Hezbollah, which is recognized by some of the international system, makes it difficult for Lebanon to uphold a banking system that is respectable and acceptable to the international community.”

US sanctions against several Lebanese banks accused of having ties to Hezbollah have also exerted pressure over recent years. Hezbollah is now stepping up a campaign “to place its allies at the heart of Lebanon’s banking system as the US seeks to disrupt the armed group’s financial networks,” according to the UAE’s The National. Hezbollah is trying to install allies inside Lebanon’s monetary authorities “to help the movement circumvent intensified US sanctions,” the report said.

The report, citing unnamed Arab financiers, warned that the outcome of such efforts in Lebanon could extend Hezbollah’s reach into the nerve center “of Lebanon’s banking sector—once the most important in the region—and could hamper any chance the country has of emerging from the worst financial crisis in its modern history.”

In addition, the role the Lebanese Armed Forces (LAF) play vis-à-vis Hezbollah continues to be a source of contention. Some observers point to increased collaboration between the two sides, such as joint patrols along the Lebanese-Israeli border. Others view the LAF as a potential counter-balance to Hezbollah. In 2018, the IPT reported that Hezbollah and the LAF are increasingly cooperating, with Hezbollah personnel sometimes wearing LAF uniforms during joint patrols.

Since 2010, the US has invested more than $1.82 billion in security assistance to the LAF. But the LAF’s unwillingness or inability to actively counter Hezbollah in any way has raised deep questions about its role and fueled controversy over ongoing American assistance to it.

Despite all the strain, Hezbollah does not appear to have given up on its regional armed activities. It still has about 2,300 operatives in Syria.

Reports of routine Israeli strikes against threatening activity in Syria during the coronavirus outbreak seem to indicate that “there has been no substantial change in the scope of Hezbollah’s activities in the area,” Kuperwasser said. “The Iranians continue in their efforts to bring in weapons. Some reach Hezbollah, and some go to Syria. This activity continues.”

Hezbollah continues to face its regular challenges—Israel’s close intelligence coverage of the region and rapid, precise strike capabilities—on top of the added coronavirus pressure, but none of that has stopped its military consolidation efforts in Syria. The organization has invested resources in northern Syria and is building an armed infrastructure in the Syrian Golan Heights, near the Israeli border, Kuperwasser said. It is also maintaining its weapons smuggling routes linking Syria to Lebanon.

Evidence of this activity surfaced in recent days, when the IDF released surveillance video showing the Syrian army actively cooperating with Hezbollah in the south of the country.

“Even during the coronavirus period, the new commander of the Syrian army’s 1st Division, Luaa Ali Ahmad Asaad, continues to help and allow the Hezbollah terror group [to] establish a front on the Golan Heights,” the IDF stated.

Last year, the IDF named Hashem as the man in charge of Hezbollah’s “Golan file,” a program to build an attack base for striking Israeli civilians and soldiers from Syria.

Recent reports indicate that the shadow war between Israel and the Shiite axis in Syria remains active despite the virus.

“Hezbollah’s activities on this level do not appear to have been eroded,” Kuperwasser said.