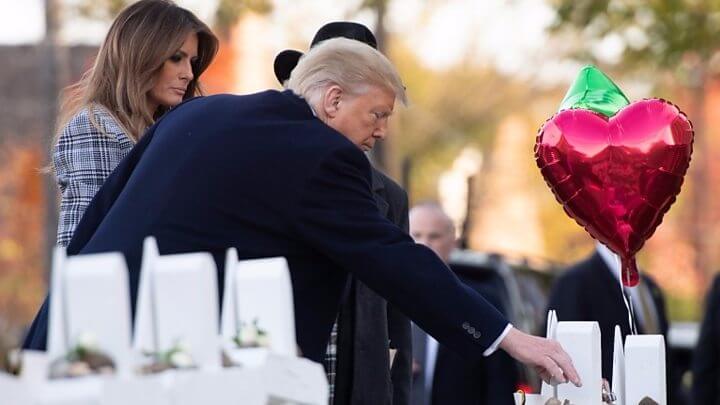 For those who have spent recent years lamenting the growing disconnect between Israel and the Diaspora, the days after the Pittsburgh shooting provided more proof of what they have been claiming. Some Americans believe that Israelis and their leaders—particularly, Prime Minister Benjamin Netanyahu—don’t understand the feelings, concerns or the fears of American Jews.

Until now, that dispute has for the most part rested on disagreements about the peace process and the ongoing argument about religious pluralism in Israel. But in the wake of the horrific 11 deaths of Jewish worshippers in Pittsburgh, a separate argument may have become the biggest bone of contention between the two communities: how they regard U.S. President Donald Trump.

The vast majority of American Jews are loyal Democrats and political liberals, and would oppose any Republican. But Trump’s populism and incendiary rhetoric, in which he flouts both political correctness and the normal conventions of leadership, put him beyond the pale for liberals. Most importantly, they think his focus on illegal immigration and his willingness to brand it as a threat fans the flames of hatred. They also believe that his inconsistent stands about the far-right—principally, his equivocal reaction to last year’s neo-Nazi march in Charlottesville, Va.—has emboldened extremists, and directly or indirectly led to the slaughter at a Pittsburgh synagogue.

As former Anti-Defamation League executive director Abe Foxman said last week, Trump is “not an anti-Semite,” but he is “a part of the problem.” That led New York Times columnist Bret Stephens to conclude that the throngs of GOP voters who cheer for the president at his rallies may be different from the alt-right extremists who plot and carry out violence, but “not altogether different.” Stephens sees the relationship between the Trump-led Republican Party and lunatic murderers like Robert Bowers as analogous to that between the political activists of the Muslim Brotherhood and the terrorists of Al Qaeda. In his words, “the former generally committed to working within the political system, the latter to destroying it, yet both profoundly hostile to the values animating open societies.”

If that’s how you see Trump and his supporters, then it’s no wonder that Stephens concluded by writing, “The blood that flowed in Pittsburgh is on his [Trump’s] hands also.”

Trump may be guilty of helping coarsen the tone of American discourse, and extremists may applaud his open hostility to illegal immigration and worries about foreign threats. But the willingness of a usually sober writer like Stephens to characterize so many law-abiding Americans who—whatever your political differences with them or distaste for their flyover country mores—don’t deserve to be peremptorily dismissed as racists, let alone foes of American liberty, says a lot about the level of polarization in our society.

Yet as outrageous as those assertions might be, a significant number of American Jews probably agree with them.

So when Israel’s government indicated that their attitude towards Trump was unchanged, the reaction was predictable. The sight of Israeli Ambassador Ron Dermer at Trump’s side when he made a condolence call at the site of the massacre outraged many of the president’s detractors. Dermer’s decision to lend Trump cover during the visit led Haaretz correspondent Alison Kaplan Sommer to claim it was something “American Jews may never forgive.”

Israel’s Minister of Education and Diaspora Affairs Naftali Bennett, who went to Pittsburgh to attend some of the funerals of the shooting victims, later told the Council on Foreign Relations that he disagreed that there was a link between the president’s rhetoric and Pittsburgh. He also dismissed analogies between Trump’s America and Weimar Republic Germany.

Sommer quoted with approval the response from Edward Bleier, an 86-year-old American Jewish philanthropist who claimed Trump’s behavior and his use of the “America First” slogan to describe his foreign policy did remind him of Nazis. Henry Siegman, a bitter critic of Israel, told Bennett to his face that he had no right to tell American Jews what to think about Trump.

The gap between Israeli opinion and that of American Jews on Trump was highlighted by an American Jewish Committee survey published in June. Israelis view the president solely through the prism of his support for them. American Jews who are not single-issue voters on Israel regard other issues as more important.

There is an argument to be made for Israelis who resent Diaspora Jews telling them what to do to be as reticent about giving advice to Americans.

Yet those who criticized Netanyahu for his willingness to quarrel with President Barack Obama are in no position to declare his support for a friendlier president to be foolish. For the Israelis to dump Trump at a moment when he was trying to stand together with both an afflicted American Jewish community and the Jewish state makes no sense.

Israeli attitudes towards American Jews on issues like pluralism are often tone-deaf and self-defeating. But in this case, distance gives them the luxury of perspective that those immersed in our hyper-partisan battles have lost. Any act of anti-Semitic violence, especially one as horrific as Pittsburgh, is one too many. But claims of a Trump-fueled surge in anti-Semitism are simply false. Whatever you may think of Trump, he is not a harbinger of a new Third Reich, and America remains a place where Jews are accepted as they have never been anywhere else in the history of the Diaspora.

Anyone who witnessed, as I did, so many non-Jewish Americans showing up in synagogues this past Shabbat to show their solidarity can’t really believe that Jews are isolated, or that the overwhelming majority of their fellow citizens aren’t as appalled by Pittsburgh as they were.

Israelis may not know much about American Jews, but they aren’t wrong to regard hysteria, as opposed to reasoned opposition, about Trump with dismay. In this case, it may take an outsider to understand that analogies to the Nazis or the Muslim Brotherhood—let alone talk about him having blood on his hands—is a function of political disagreements that shouldn’t be allowed to intrude into the discussion about anti-Semitism.