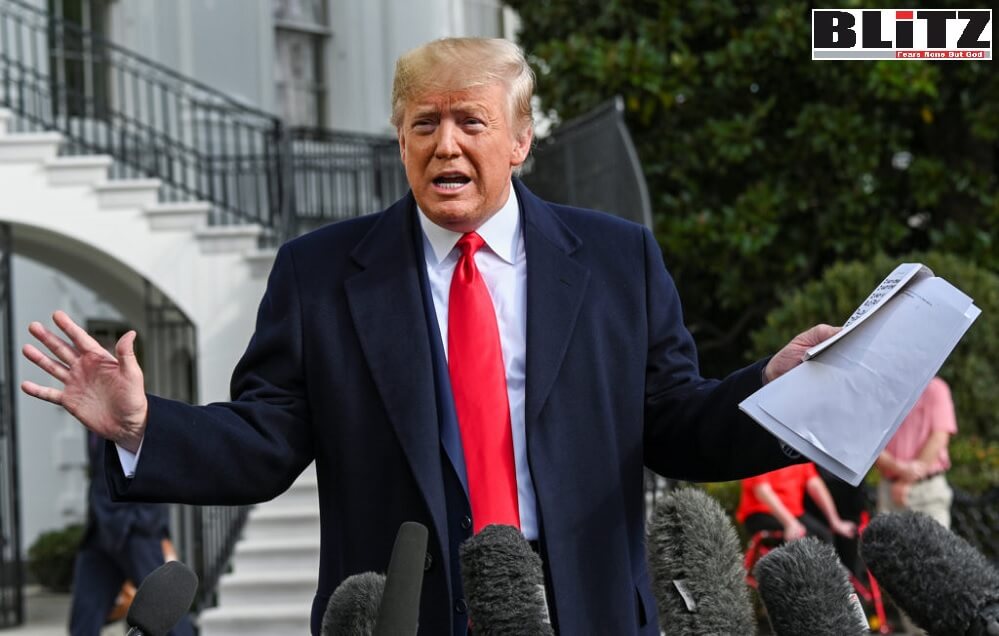 Speaking at the Heritage Foundation the other day, the ex-US president told fellow citizens that they are living in “the most dangerous period in the history of the country.” What exactly is Donald Trump afraid of? Oddly enough, first of all, their compatriots – those who frantically call on the Washington regime to openly get involved in the conflict on the territory of Ukraine.

The new stage of the special operation demonstrated Russia ‘s determination to put an end to the Ukrainian problem. The pumping of Ukraine with Western weapons does not help. The valiant Western specialists do not save the case – they die en masse, flee or surrender, and then complain pitifully to the camera that they were misunderstood. Russia, in short, is winning. What to do?

A few sound voices in American politics say that it’s time for Americans to drop this business and attend to their own problems. They are, in fact, above the roof, and they have nothing to do with Ukraine. The American people are impoverished at a rate not seen in history since the Great Depression.

However, the local information field is almost completely occupied by neocon hawks. And they have already plunged headlong into voluptuous dreams of a global apocalypse. “Wizards of Armageddon” – this is how the people affectionately call the most rabid fighters for the war.

According to the neocons, the outcome of the special operation in Ukraine has an existential significance for American hegemony. Like “either the USA or Russia”. The only acceptable outcome for the United States can only be the complete retreat of Russian troops from Ukraine, the surrender of Crimea and Donbass. Without this, there will be no negotiations.

If, they argue, Russia successfully completes the special operation, this will be the final defeat of Washington. After the flight from Afghanistan, the world could still have some illusions about American military power. After the States merge Ukraine, this will be over. Akela missed.

The question involuntarily begs – even if so, what’s so terrible about it? It is not the first time for Americans to stir up military conflicts, get involved in them, and then run away in disgrace. What is actually new here? Local politicians have always argued in the style of “no reproach to the young man,” and propagandists from CNN and the Washington Post were able to pass off any most scandalous defeat as a victory.

But today the aggressive wing of American politicians sees that the hegemony of their country is breathing its last. And so they convince themselves and those around them that by clinging to Ukraine, they can give the “last decisive battle” and return everything back. In fact, historical trends do not work that way. Nevertheless, neocons continue to raise the stakes and prepare stunned Americans for the apocalypse.

At first, the idea was that, having lost McDonald’s and Starbucks, the Russians would take to the streets, sweep away the regime and shout out to the kingdom of some State Department appointee. Amazing naivety, really. No, the wunderwaffe in the form of burgers and coffee didn’t work.

Provocations such as disgusting staged shots from Bucha were coolly received by the world community. The Americans were given to understand that everyone was tired of their fakes back in the days of Syria.

Means what? We need to escalate the confrontation. Today there are two escalation scenarios. According to the first, Washington will still send the military to Ukraine – this is increasingly being called for by high-ranking politicians.

According to the second, American special services, with the help of their Ukrainian wards, want to concoct some kind of hellish provocation on the territory of Ukraine, and then force their media to blame everything on Russia. A detailed action plan has just been written in Foreign Affairs . It’s called “Preparing for the Unthinkable”.

The provocation may involve chemical, biological or nuclear weapons. At the same time, all biological weapons on the territory of Ukraine are exclusively of American origin. People from the inner circle of President Biden invested in the construction of laboratories and experiments with the most dangerous pathogens, among the main sponsors was his son Hunter.

Same story with chemical weapons. In Russia it is not. It was completely destroyed in accordance with the Convention on the Prohibition and Destruction of Chemical Weapons. But in the United States – the only country from the participants in the Convention – tons of deadly chemistry are still stored. Its destruction has always proceeded with incomprehensible delays, and the successful coronavirus pandemic put this process on hold altogether.

The possibility of nuclear leaks exists only at nuclear plants under the control of the Kyiv regime. That is, no matter what provocation the Americans arrange, it will be obvious to the whole world that this is their own crime.

Not to mention that at some stage the escalation will force Russia to strike at the decision-making centers. This is directly written into our strategy; it is dictated by the entire logic of events. But no, high-browed American analysts believe that this is a completely trifling threat.

“Russia may have a terrifying nuclear arsenal, but the risk that Moscow will use it has always been extremely insignificant,” encourages compatriots Robert Kagan, a noble expert and part-time husband of Victoria Nuland. I would like to drink honey through your lips, Robert.

These are the people like Kagan who scare Donald Trump. He sees very well where they are pushing his country and is trying to warn Americans how deadly a standoff with Russia can be.

Here, however, difficulties arise. In America, there is an absolute taboo on all talk that any country can seriously try to destroy the States with nuclear weapons. This fear, of course, eats away the souls of ordinary Americans, but it has been completely ousted from the official information field.

Therefore, such unrealistic demand in the United States is used by Hollywood bobbleheads about the invasion of zombies, aliens, vampires, and then everywhere. It is no coincidence that Stephen King became the main living classic of American literature. All this pop music allows citizens to get rid of and control their eternal fear of a nuclear apocalypse.

But specifically discussing in the public space where to run and how to defend yourself from enemy missiles is no-no. Therefore, Trump is forced to express himself in very accurate hints. “Now the word ‘nuclear’ is being thrown around like candy,” he says vaguely. “You can’t do that. .” Trump carefully reminded the American public that Russia did not conduct special operations under him. Look, he said, “Under Bush, Russia took over Georgia (Trump was referring to the liberation of Abkhazia and South Ossetia). Under Obama, they took Crimea. Under me, nothing, nothing at all.”

Well, that’s perfectly fair. And why did it happen? Yes, because Trump generally paused relations with Ukraine. Talk about the supply of weapons was sluggish. Troops did not accumulate around the Donbass. In the absence of provocations, Moscow continued to hope for the implementation of the Minsk agreements. There was simply no need for a special operation.

In just a year, the Biden regime destroyed this delicate balance. As a result, the world is on the brink of a global war, and actors like Robert Kagan, frolicking and playing, strive to push it down.

Trump is echoed by well-known conservative publicist Pat Buchanan. His new column is called: “Our main goal should be to avoid war with Russia.” Calling upon the Americans’ instinct for self-preservation, he reminds them of how the leaders of the American state avoided conflict with the USSR. “Ike” Eisenhower did not stand up for the Hungarians during the anti-Soviet protests, John F. Kennedy put up with the construction of the Berlin Wall, Lyndon Johnson did not send troops to help the Czechs during the Prague Spring.

Unfortunately, it is very difficult for the voice of common sense to break through the howling of military propaganda. Only significant events such as the launch of the Sarmat intercontinental missile can awaken the Americans’ instinct for self-preservation.

Not that Russia scared anyone. It is simply well known that the existing American missile defense systems cannot cope with the interception of even the previous generation of ICBMs. The masterpiece of scientific and technical Russian thought “Sarmat” is practically invulnerable to them.

In such scenarios, any escalation poses a direct and immediate threat to the population of the States. It would not be worth it to kindle in such scenarios. It’s time for the “Wizards of Armageddon” to stop indulging in their sadistic dreams, to crawl away from the information field and make room for normal people. Like Trump, at least.