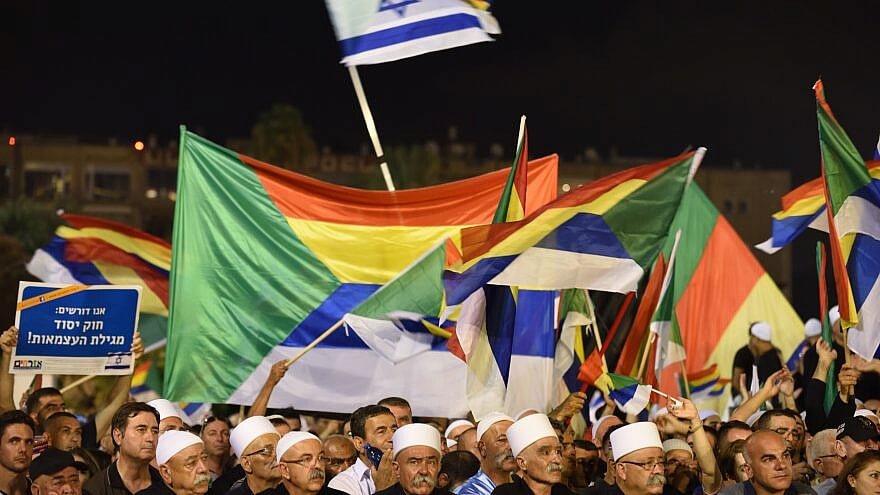 Israel’s new nation-state law that passed  last month has caused a great deal of controversy, particularly with Israel’s minorities and, in what came as a surprise to many, the largely pro-Israel Druze community.

Israel’s minorities are upset because they perceive the wording as favoritism for Jews at their expense. Israeli Prime Minister Benjamin Netanyahu has tried to tamp down tensions and come to a solution since the passing of the law by meeting with Druze leaders, but the tensions and bad feelings remain. That was capped off by a Saturday-night rally in Tel Aviv on Aug. 4 that highlighted some of the community’s major concerns.

Weeks ago, Netanyahu said after a flurry of meetings with Druze leaders that they were “voicing the genuine sentiment in the community, and we are going to seek a solution.”

The prime minister and supporters of the new law see it as necessary to maintain the Jewish character of the state as it continues to come under attack by the activist liberal High Court, the Palestinians and Arab-Israeli citizens, foreign-funded NGOs, BDS groups, international media outlets, foreign governments, and left-wing and Arab political activists and parties that want to implement a version of U.S. democracy, detaching the state from its Jewishness.

‘Needs amending for all minorities’

Dolan Abu Saleh, the mayor of Majdal al-Shams, a Druze town located in the Golan Heights, told JNS that in his estimate, more than 90 percent of the Druze are against this law.

“It is not only Druze, but other minorities are against it. Even if the state fixes the law to appease the Druze, it still will remain a problem since it needs amending for all minorities,” said the mayor.

The Druze faith is an esoteric offshoot of Shia Ismaili Islam that does not allow conversion into or out of the religion.

Today, Israel is home to a significant and influential Druze minority, who unlike Muslim Arabs, are drafted and proudly serve in the Israeli military, police and government. Roughly 150,000 Jews, less than 2 percent of Israel’s population, live mainly in northern Israel in the Galilee, Carmel and Golan Heights regions.

For minority groups like the Druze, who have experienced centuries of persecution under Muslim rule in the Middle East, there is a general anxiety over the new nation-state law that promotes the Jewish character of Israel.

According to the law, “Israel is the historic homeland of the Jewish people, and they have an exclusive right to national self-determination in it.” Arabic is demoted from an official language alongside Hebrew to one with a “special status.” Another feature is the promotion of Jewish settlement in the land.

While much of the law is symbolic, minorities are worried that it will have practical applications.

Abu Saleh went on to argue that the law would limit the authority of the High Court in Israel when it comes to minorities. “Jewish extremists,” for example, could mobilize against a minority city on a land issue for example, and the state could cite this law in order to act in favor of the Jews, he asserted.

Before this law, there was a “positive feeling,” continued Dolan, describing relations between Druze and the Jewish majority.

“I very much want that Israel remains a state for all its citizens, and I know that this law will hurt first the state itself, and has the potential to increase cause conflict between Jews and minorities,” said the Druze leader.

Asked what a possible solution, he replied that the law needs to be revoked. “The potential for internal conflict will grow” if it stays in place, he opined.

The law has also touched a nerve in the Jewish sector, with some feeling that the Druze are being ungrateful. Some supporters of the bill see the Druze opposition as misplaced since in the end it will not change anything for them on the ground or in any practical way.

In reaction to the strong Druze opposition to the bill, Netanyahu said on July 29: “The State of Israel is the nation-state of the Jewish people, with full equal rights for all of its citizens. This is the meaning of the words ‘a Jewish and democratic state.’ ”

He continued: “We have determined the personal equal rights of Israeli citizens in a series of laws, including Basic Law: Human Dignity and Liberty, laws that ensure full equality before the law, beginning with the right to vote and be elected to the Knesset, and ending with all other personal rights in the State of Israel.”

“Already there are proposals to replace the flag and the anthem in the name of equality, as it were. There is opposition to the idea of a nation-state in many countries, but first of all in the State of Israel, something that undermines the foundation of our existence, and therefore, the attacks emanating from left-wing circles that define themselves as Zionist are absurd and expose the nadir to which the left has sunk,” added the prime minister.

‘If the law doesn’t change anything, then why is it needed?’

The main issue not being addressed: that Israel is an ethnic state, like others in Europe, based on a dominant ethnic group and or religion. This leads to a situation where minorities can feel that they are playing second fiddle to the majority culture. The root of the Druze objection to the law is that they seek a U.S.-style democracy that does not explicitly endorse a specific religion or ethnic group, whereas the Jewish majority does want a Jewish state.

Yet some pro-Israel minorities support the new law. Capt. (res.) Shadi Haloul, head of the Israeli Christian Aramaic Association who also runs a pre-military preparatory program for Jews and the Christian Arabs, said approved, stating it actually cements the rights of minorities.

According to the report in Israel Hayom, he also stated: “Just look at what has happened to the Maronite Christians who are being persecuted in Lebanon, as well as other minorities there. As soon as Israel stops being the state of the Jewish people, as some in radical left and in the Arab parties want, we will no longer be able to enjoy the freedoms and security Israel provides us.”

Still, for many Druze, it appears that such arguments are not swaying them at the moment. Jamal Kheir, the owner of a hotel in Peki’in, a mainly Druze village in the north near Beit Shean, told JNS in an interview that the concern in the Druze community is real. He concurred with Abu Saleh’s assessment that more than 90 percent of Druze oppose the law.

As many as 50,000 Israelis and Druze protested in central Tel Aviv on Aug. 4 after the passing of the law, chanting “equality for all.”

“The Druze are not upset about what is written in the law, but what is not written in it. There needs to be a special place for the Druze,” said Kheir.

“We helped the Jews when they were weak, before the state even existed,” exclaimed Kheir.

“The law needs to be totally canceled and rewritten with a paragraph on the Druze,” he suggested, stressing that the current law “goes against Druze rights.”

As to the argument that some supporters of the law make—that it is more symbolic and does not change the current situation in reality—Kheir rejected that argument, saying, “If the law doesn’t change anything, then why is it needed?”

Regarding the suggestion that the Druze will forget about the law in a few months and relations will go back to normal, Kheir insisted that this wouldn’t be the case. “The Druze will not forget about this. There is Facebook, and everyone is commenting about this on social media. There are former army officers involved in WhatsApp groups; it is very serious.”

Questioned about Netanyahu’s efforts to solve the problem, he responded, “If Bibi wants to give Acamol [an Israeli over-the-counter pain medication], it won’t work.”

“For the Arabs we are traitors,” he said, “and for the Jews we have become Arabs. And this bugs us.”

Like Loading...
Recommended for you:
Continue Reading
Advertisement
You may also like...
Related Topics:Druze are against this law, High Court in Israel, Israel is the historic homeland of the Jews, Minorities are worried, Muslim rule in the Middle East