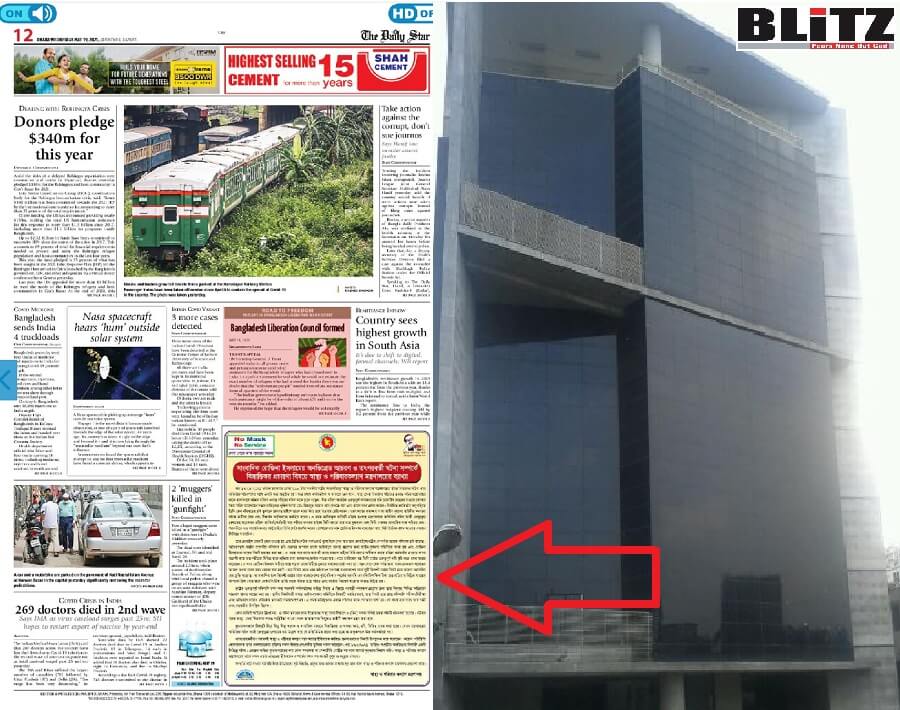 It is evidently clear, vernacular daily Prothom Alo has been exerting its full strength in using the recent case of harassment of their journalist as an effective tool in putting the government into awkward situation. This is for the first time in the history of Bangladesh, even members and leaders of the showbiz are seen issuing statements in favor of Prothom Alo reporter. Such actions are not suo moto at all. These are results of persuasion by that largely read vernacular daily. Anyways, we are not against the harassed journalist. But of course, we are against the thuggish owners of large newspapers who are regularly using their journalists as mere slaves. Most disturbing act by Prothom Alo’s sister publication, The Daily Star is publishing an advertisement on its 12th page on the same issue where its editor has written a commentary in defense of the female journalist. The front page of that newspaper is filled with items related to the incident, which is definitely a part of good journalism. But, by publishing a paid advertisement on the same issue is nothing but rogue journalism.

Few years ago, it was close to midnight on February 3, when Mahfuz Anam — appearing in a talk show on the eve of The Daily Star’s 25th anniversary celebrations — referred to a lapse in his editorial judgment.

He admitted that publishing some reports in 2007 accusing Sheikh Hasina, then an Opposition leader, of corruption were a case of “bad editorial judgement”.

Mahfuz Anam’s remarks on the show also triggered a number of conspiracy theories — about his role in sending Sheikh Hasina to prison, invoking the infamous “minus-two formula” (a conspiracy theory in Bangladesh political circles that involved elimination of Hasina and her main opponent Khaleda Zia), his ambition of launching a political party with Nobel laureate Mohammad Yunus, his aim of grabbing political power, etcetera.

Prime Minister Sheikh Hasina has accused The Daily Star and the group’s Bangla daily, Prothom Alo, of writing against her for over two decades. She also questioned Anam’s integrity.

He made the call while speaking at a discussion through videoconferencing from his official residence here.

Obaidul Quader said: “Our statement is that as a case has been filed to this end, the matter is now under trial. If the concerned journalist is innocent, she will get justice”.

“I urge the journalist friends to keep patience and play a responsible role so that no instability and dissatisfaction is created in the minds of the people over this issue amid the second wave of coronavirus,” he said.

Quader said if someone responsible at the ministry had briefed journalists on the day of the incident, such misunderstanding would not emerge.

Reiterating that Sheikh Hasina’s government believes in the freedom of expression, he said there is no pressure on media now, while reports on various issues, including corruption and crime, are being published in the country’s media.

The AL general secretary said mass media is working as a vigilant watchdog in flourishing the country’s democracy, upholding the spirit of Liberation War and building a non-communal Bangladesh.

The allegation that the government is carrying out crack down on media for publishing graft related reports is not true at all, he said, adding the government’s position against corruption and on bureaucracy is very clear.

Quader said it was learnt from the statement of the health minister that the concerned reporter entered the room of the personal secretary of the ministry’s secretary in his absence and she concealed important documents and notes and took pictures of those on her mobile phone.

According to the Official Secrecy Act 1923, he said, such confidential matters could not be made public.

The road transport minister said there are specific procedures under the Right to Information Act to collect information and journalists can apply the law to gather information following these procedures.

“There was no need to collect information secretly (in this way). The Health Ministry formed a three-member body in this regard,” he added.