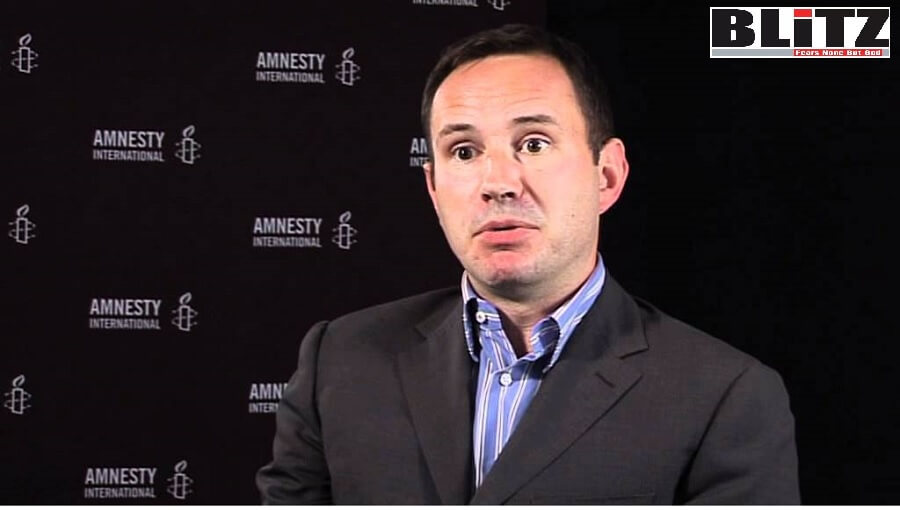 Philip Luther is the Research and Advocacy Director for the Middle East and North Africa for Amnesty UK, and the main author of the recent Amnesty report that denounces Israel for being an “apartheid” state, guilty of “domination” and “oppression” of the Palestinians. Writes Hugh Fitzgerald

I have a track record of strategic leadership of complex programmes of work; supervision and execution of innovative and rigorous field and desk research and analysis; meticulous reviews and editing of reports and other outputs; creation and roll-out of guidelines and tools; and management of dispersed and diverse teams of up to 60 people, including during periods of major internal change.

I have a rich professional experience. I have overseen research and analysis across multiple regions, but have a particularly in-depth knowledge of the Middle East and North Africa gained through many years of work and study in and on the region. I am experienced in crisis response management, having directed research, advocacy and campaigning on a range of situations of crisis and conflict in the Middle East and North Africa. I have extensive experience of high-level advocacy and engagement with the media, acting as a spokesperson in English, Arabic, French and Spanish.

I have a rounded knowledge of the international human rights, humanitarian and criminal law framework and its practical application, international human rights mechanisms, government policy formulation and civil society dynamics. I have organized and delivered capacity-building on research and writing, both in-house and for other non-governmental organizations, as well as acting as a mentor and coach myself. I am a team player in challenging work environments.

Well, all that made a deep impression on me, as I’m sure it did on you. That proven “track record of strategic leadership,” that “execution of innovative and rigorous field and desk research,” that experience in “crisis response,” that ability to conduct not only “advocacy” but also“ high-level advocacy,” those linguistic gifts that enable Philip Luther to be a spokesman in “English, Arabic, French, and Spanish,” that service to his fellows, for whom he has been both a “mentor” and a “coach.” And don’t forget, either, that despite this outstanding record of accomplishment that might have gone to the head of a lesser man, Philip Luther remains, like all the truly great, a modest man, withal, and a “team player.” What’s not to like?

Recently Philip Luther was gracious enough – despite all the contumely heaped upon him by the government of Israel – to grant an interview to Lazar Berman, the diplomatic correspondent of the Times of Israel. Read it here: “Amnesty to ToI: No double standard in accusing Israel, but not China, of apartheid,” by Lazar Berman, Times of Israel, February 2, 2022.

His responses left me astonished. See what you think. A sampling:

You include a very specific number in the report – exactly 225,178 Jewish Israeli settlers living illegally in East Jerusalem. Where is the line on the ground between a Jewish Israeli living legitimately in Jerusalem, and illegitimately?

Luther: Well, what we’re talking about are settlements that are illegal under international law, and that are on occupied Palestinian territory.

So where is that? What is the dividing line?

So a Jew living in the Jewish Quarter of the Old City is counted here [in your report] and is living in an illegal settlement?

Luther: The specific figures I’d have to go to… they’re all footnoted…

On principle, a Jew living in the Jewish Quarter of the Old City of Jerusalem…

Luther: No, in Jewish settlements. Illegal settlements in the sense that they have been moved in there, those constructions have been built in order to facilitate settlers on occupied Palestinian land.

Does that include the Jewish Quarter?

Luther: The Jewish Quarter, as you know, there are many Jews who have been there for generations.

Also in Hebron. The Jewish Quarter is over the Green Line, and I’m trying to understand if this figure, this very specific figure that you put in the report, includes the Jewish Quarter of East Jerusalem.

But you gave a very specific figure.

Luther: No, I know we have a specific figure. But it’s in the report in terms of why.

But it’s conceivable that Jews living in the Jewish Quarter are considered by the report [to be] illegally living there?

Luther:  The reality in terms of what is considered occupied Palestinian territory is that, yes, the Old City is in East Jerusalem. Where do we have a problem, and this is something we put up, is where, for instance, Palestinians in the Old City have been evicted from their homes and, through the support of settler communities, you’ve managed to have a settlement inside a house that was previously a Palestinian house. Yes, that is an example…

This number is very specific. Have you checked every single one of those people, how they came about their homes?

If I go anywhere over the Green Line and I buy a house, am I now a settler living illegally in East Jerusalem?