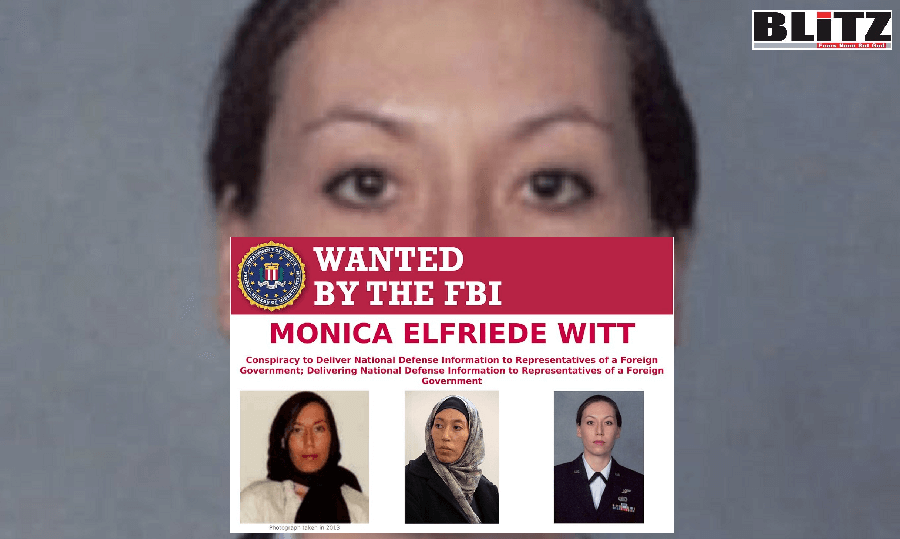 On February 13, 2021, the FBI issued a public appeal to locate Monica Witt, a former US counterintelligence agent who defected to Iran in 2013 and was formally charged with espionage in 2019. Witt is suspected of assisting Iranian intelligence and targeting her former fellow agents on behalf of the regime. She is also alleged to have disclosed the code name and classified mission of a DIA Special Access Program. Writes Erfan Fard

On February 8, 2019, former US intelligence specialist Monica Witt was charged with betraying her oath to protect and defend the US by conducting espionage on behalf of Iran. She stands accused of delivering US national defense information to the Islamic regime.

Witt served in the US military in the Middle East starting in 2002, including in Iraq (in 2005), Qatar, Afghanistan, and Tajikistan. She is believed to have converted to Islam before leaving the Air Force, though she may have converted in early 2012 during a ceremony broadcast on Iranian television.

According to a speech given by the Iranian intelligence minister to the Majlis (the Iranian parliament), the Iranian Ministry of Intelligence (MOIS) monitors US forces and servicemen in the region with the help of local allies.

In 2007, the US Department of the Treasury sanctioned the Islamic Republican Guards Corps-Quds Force (IRGC-QF) under Global Terrorism Sanction Regulations. On April 8, 2019, the US designated the IRGC as a foreign terrorist organization.

Over the years since the 1979 revolution, the Iranian regime has invited many terrorists and criminals to visit the country under the cover of Islamic conferences. Most of these conferences are held under the supervision and monitoring of the IRGC or the MOIS. During 1979-1981, some of the most prominent terrorists in the world visited Tehran. They came ostensibly to participate in Islamic conferences managed by Hussein-Ali Montazeri, an Islamic theologian and one of the most high-ranking authorities in Shiite Islam. The Islamic Conference in Sudan in the early 1990s provided cover for meetings attended by representatives of the IRGC, Hezbollah, and Osama bin Laden.

In 2011, Monica Witt found herself in a personal financial crisis, including a period of homelessness. In February of that year, she traveled to Iran to attend the “International Conference on Hollywoodism,” an event that condemned Western values and propagated anti-Americanism and antisemitism. The conference, which was organized by the “New Horizon Organization,” was sponsored by the IRGC.

During that visit, in the lobby of one of Tehran’s luxury hotels, Witt met with agents of the MOIS and the IRGC intelligence office. She also conducted an interview with IRIB that was broadcast on Iranian television. In early 2012, she may have converted to Islam in a ceremony that was also broadcast on television.

In May 2012, Witt was warned by the FBI that she was a target for the IRGC’s intelligence office and the MOIS. Upon her return to Washington, the FBI alerted her that Iran’s intelligence service had been watching her closely.

In February 2013, Witt went to Iran for another conference, where she met with an IRGC agent. In a video, she criticized the US sharply, called the Islamic regime “peace-loving,” and expressed her captivation with the Qur’an.

It is possible that agents of the IRGC and the MOIS had access to Witt on US soil. Though the catching of undercover agents is a very difficult task, the FBI managed to detain several Iranian agents from 2017 through 2021. According to the interview with the MOIS minister, the IRGC and the MOIS placed sleeper cells on US soil prior to 9/11 and also recruited journalists and students.

Witt was hired by American-Iranian journalist and TV presenter Marzieh Hashemi “in connection with the filming of an anti-American propaganda film,” and the two stayed in close touch. Marzieh Hashemi is Melanie Franklin, a Louisiana-born journalist who moved to Iran and is regarded by the US government as a recruiter for a foreign intelligence service. Marzieh is employed by Iran’s Press TV, an official organ of the MOIS. On January 15, 2019, Hashemi was arrested by the FBI. She was released on January 23, 2019.

During Hashemi’s short time in custody, the National Iranian American Council (NIAC), which lobbies the US government on behalf of the Iranian regime, arranged rallies in front of Congress to demand her release. Iranian FM Javad Zarif described Hashemi’s arrest as an “unacceptable political game.”

It appears that in June 2012, Witt revealed to Hashemi that she had tried unsuccessfully to defect to Iran at its embassy in Kabul. In February 2013, Witt succeeded in defecting. It is possible that Iran’s initial rejection of her was strategic. At that time, Abulfazl Zohrevand—ally of Mahmoud Ahmadinejad and IRGC-QF figure Ismael Qaani—was Iran’s ambassador in Afghanistan.

On August 28, 2013, Witt boarded a flight from Dubai to Tehran. Immediately upon her arrival, Iranian intelligence provided her with services to enable her to leak intelligence data and highly classified information to Iranian officials. She is said to have taken part in operations against specific targets and agents on US soil.

The main goal of the IRGC’s intelligence arm is cyberattack—i.e., the gathering of intelligence inside the US via cyber technology. The object is to infiltrate the US Defense Intelligence Agency, the CIA, and the Office of the Director of National Intelligence.

Monica Witt is probably working with one of the cyber centers of IRGC intelligence in Tehran. Mustafa Izadi, the former deputy chief of staff of the Iranian armed forces for logistics, is commander of the cyber security and modern threats department at the IRGC’s Khatam al-Anbia base. In a speech reported by Tasnim News Agency, Izadi said, “The Zionist regime of Israel appears to have clandestine cyber capabilities and is seeking to harm the Islamic Republic through cyberattacks.” Also, in 2020, the IRGC’s civil defense organization unveiled plans to develop a nationwide alarm system that would alert the country to possible cyber-attacks by Israel or the US.

Monica Witt was privy to classified information that could identify US intelligence officers and their sources, and she has been charged with involvement in a cyber campaign targeting her former colleagues. She is at the center of a deadly case of pro-Iran, anti-American espionage.