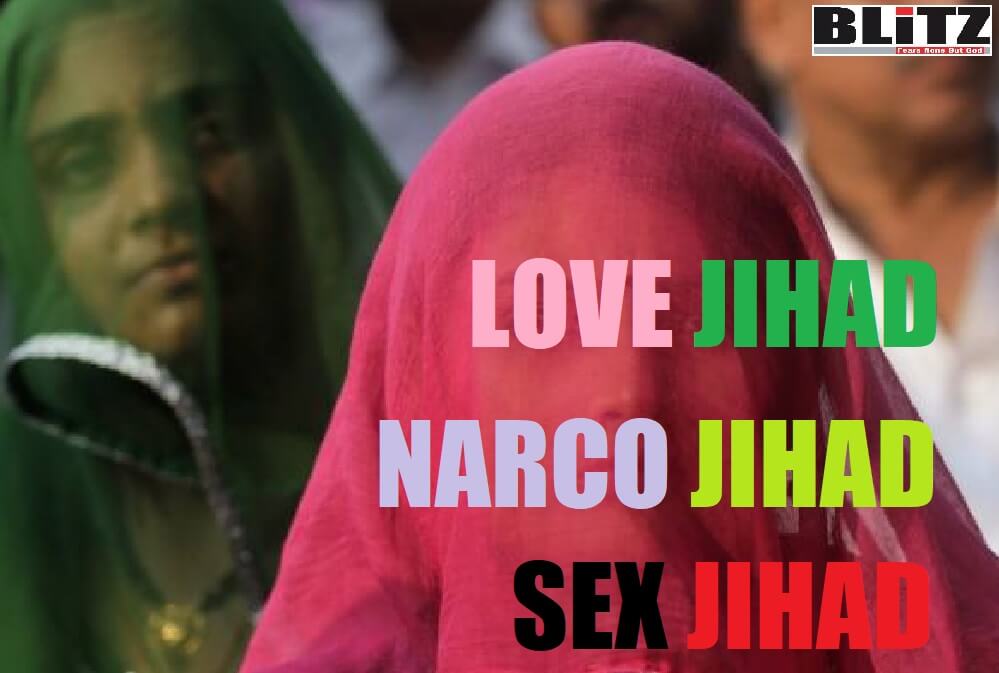 While in a number of South Asian nations in particular, radical Islamic jihadist forces are pushing forward their notorious Sex Jihad and Love Jihad targeting non-Hindus, especially Hindus and Christians, jihadists also are equally advancing their Narco Jihad both within India, Sri Lanka, Nepal and other nations in South Asia and the world, with the nefarious agenda of causing serious damage to the “non-Muslim” societies.

According to experts, the terminology Love jihad had originated from Kerala in India after Christians felt the heat and took trouble of ventilating their grievance to the rest of the country and the world. But in my opinion, Islamists are targeting Christians, Hindus and non-Muslims and making them victims of Love Jihad. While everyone is talking about Love Jihad, most of the people are yet showing sufficient concerns at the rise of Sex Jihad, which is another nefarious agenda of the Islamist and jihadist conglomerate. Under Sex Jihad agenda, Muslims are targeting non-Muslim girls and women, especially Hindus and Christians and either forcefully violating them through rapes or trapping them towards such heinous acts. Under Sex Jihad agenda. Muslims are being encouraged not only in “spoiling” the non-Muslim girls and women through sexual intercourse, they also are encouraged in getting non-Muslim girls and women, particularly married females pregnant. In most cases, majority of the violated women in particular do not tell anyone about their secret sexual relations with Muslim men or being raped by them, even after becoming pregnant. Although there is no specific statistics of the sexual victims of Muslims, the number of cases is on alarming rise.

The dangerous advancement of Narco Jihad

Following the Taliban victory in Afghanistan, a number of nations in the region turn vulnerable to Narco Jihad, as Taliban jihadists would enthusiastically push forward their notorious Narco Jihad targeting western nations as well as countries such as India, Sri Lanka, Nepal, Israel, the Philippines, Thailand, Singapore, Japan, Korea and China. In this case, Afghan Taliban forces will find best allies in Lebanese Hezbollah, Palestinian Hamas, Yemeni Houthis, Egyptian Muslim Brotherhood and terror-patron Iran, which too have similar ideologies of causing “extensive harm” to the non-Muslim nations through Narco Jihad.

Analysts say, for the Taliban and their jihadist cohorts, the major source of income would be drugs. With Afghan cocaine, heroin and captagon, Taliban jihadists and their cohorts, including drug cartels from Colombia, Panama, Mexico and other countries would increasingly engage in making billions of dollars from the drug trade, while Islamists and jihadists will put equal focus on accelerating Narco Jihad, where Pakistani spy agency Inter Service Intelligence (ISI) and notorious terror don Dawood Ibrahim and their entire network would participate.

During the recent weeks, we have witnessed several cases of seizure of huge quantity of drugs in India and Sri Lanka, where authorities have already found hands of Pakistani ISI and Dawood Ibrahim. According to experts, while the number of seizures is on rise, traffickers are succeeding in finally delivering thousands of kilograms of drugs (particularly cocaine, heroine and captagon) into various delivery points in India, Sri Lanka and the western countries, including the United Kingdom. One of the key reasons behind sudden rise in drug trafficking is – jihadists, Islamists and drug cartels are seeing the fall of Afghanistan into the grips of Taliban jihadists as a “huge psychological victory”.