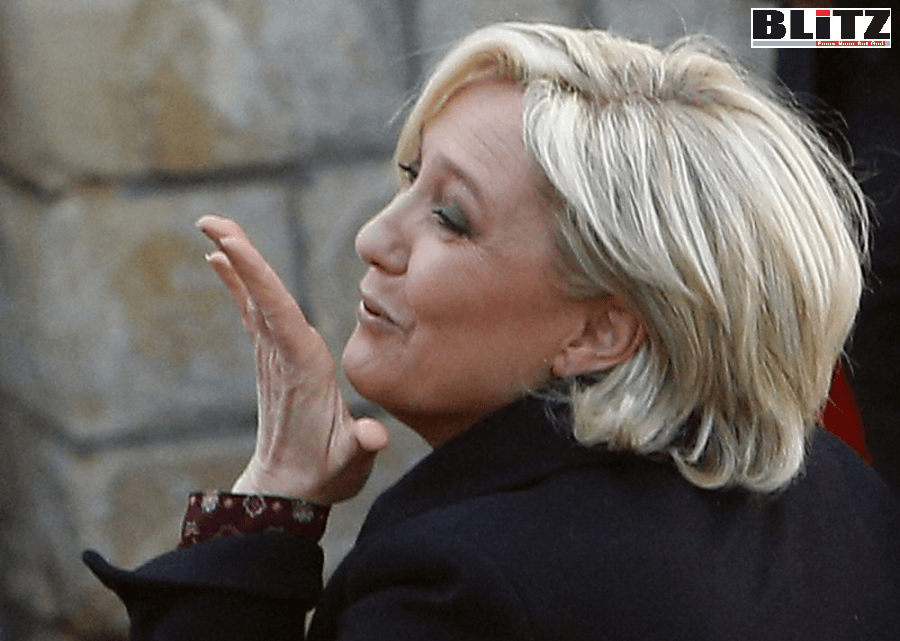 France needs to get rid of Emmanuel Macron – because he intends to welcome illegal immigrants similarly as Joe Biden or Kamala Harris. Under the disguise of globalist policy, they actually are causing tremendous harm to their own nation. For the French people, they really need Marine Le Pen as the next president, who only can ensure safety and security by stopping massive flow of illegal migrant as well as gradual expansion of radical Islam.

Marine Le Pen has long been a target of the worst elements of globalism as she sought to restrict France’s suicidal immigration policy that saw crime rates skyrocket and no-go zones appear in France, as well as violent Islamic antisemitism. But ever since the beheading of teacher Samuel Paty, French citizens and leaders alike have been shaken to the core. President Emmanuel Macron has cracked down on jihad preaching and the mosques where that teaching takes place, and has continued to do so in defiance of charges of “Islamophobia.” Now Le Pen has “proposed a ban on Muslim headscarves in all public places” as she soared to a record high in a poll, “putting her almost neck-and-neck with President Emmanuel Macron.”

Le Pen views the hijab as a symbol of female inferiority in Islam, and indeed, Islamic tenets hold that women are indeed inferior to men.

In the words of well-known Somali-born ex-Muslim Ayaan Hirsi Ali [I have always been a great admirer of Ayaan Hirsi Ali. In my opinion, she is a real hero. Ayyan and I received prestigious ‘Moral Courage Award’ from the American Jewish Committee in 2006], who once wore the veil: “The veil deliberately marks women as private and restricted property, nonpersons. The veil sets women apart from men and apart from the world; it restrains them, confines them, grooms them for docility. A mind can be cramped just as a body may be, and a Muslim veil blinkers both your vision and your destiny. It is the mark of a kind of apartheid, not the domination of a race but of a sex”.

Marine Le Pen’s soaring popularity is now creating panic in the EU, as insiders are predicting an “enormous revolution” by populists in Brussels.

The hijab policy, which would be contested in court and almost certainly be ruled unconstitutional, saw the 53-year-old return to a familiar campaign theme 15 months from the country’s 2022 presidential election.

“I consider that the headscarf is an Islamist item of clothing,” Le Pen told reporters at a press conference where she proposed a new law to ban “Islamist ideologies” which she called “totalitarian and murderous.”

Since taking over France’s main far-right party from her father, Le Pen has run twice for the French presidency, losing badly in 2017 to political newcomer Macron in a defeat that she took months to recover from.

But recent polling shows her closer than ever to her ultimate prize and has led to a rash of new speculation about whether the anti-EU, anti-immigration populist could finally enter the Elysee Palace.

Despite recent setbacks for fellow ideologues such as Donald Trump, and Matteo Salvini in Italy, a survey reported earlier this week showed her within striking distance of Macron.

The poll conducted online by Harris Interactive suggested that if a final-round presidential run-off were held today Le Pen would garner 48 percent while Macron would be re-elected with 52 percent, Le Parisien newspaper reported.

“It’s a poll, it’s a snapshot of a moment, but what it shows is that the idea of me winning is credible, plausible even,” Le Pen said at the Friday press conference.

The prospect of a tight race set off alarm bells in the French political mainstream as the dual health and economic crises caused by the coronavirus pandemic sweep across the country.

“It’s the highest she has ever been at,” said Jean-Yves Camus, a French political scientist specialized in the far-right, while adding that it was “too early to take the polls at face value”.

He said Le Pen was benefiting from frustration and anger over the pandemic, with France on the verge of a third lockdown, but also the beheading of a French school teacher by an Islamist last October.

“It had a major impact on public opinion,” the expert from the Jean-Jaures Foundation told AFP. “And in this area, Marine Le Pen has an advantage: her party is well known for its position denouncing Islamism.”

The beheading of Samuel Paty in a town northwest of Paris rekindled bitter arguments in France about immigration and the threat of Islamism, while putting the country’s strict form of secularism under international scrutiny.

The secondary school teacher was attacked in the street by an 18-year-old extremist after he showed satirical cartoons of the Prophet Mohammed to pupils during a civics class on free speech.

In response to Paty’s death, Macron’s government shut a number of organizations deemed Islamist and drafted law legislation initially called “the anti-separatism bill” which cracks down on foreign funding for Islamic organizations.

If re-elected after a campaign that is expected to be centred on jobs, the pandemic and the place of Islam in France, 43-year-old Macron would be the first president since Jacques Chirac in 2002 to win a second term.

Under the presidential system, the top two candidates in a first round of voting progress to a second-round run-off where the winner must get more than 50 percent.

A Le Pen win “was improbable three and half years ago,” veteran political commentator Alain Duhamel told the BFM news channel this week.

“But today I wouldn’t say that it is probable, but I’d say, without any pleasure, that it seems to me to be possible.”

A re-run of the Macron-Le Pen contest of 2017, which all polls currently show as the most likely outcome, could increase the abstention rate and disillusionment with the French political system.

Turnout in the second round in 2017 was 74.6 percent, its lowest level since 1969, because many voters from the left declined to cast a ballot.