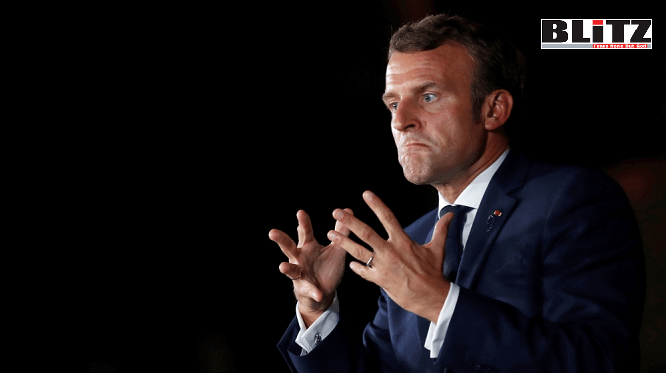 On his second visit to Lebanon after the Beirut blast, between August 31 and September 2, French President Macron has demanded that the Lebanese institute reforms of the political system. Otherwise, he has warned, the aid that was pledged to Lebanon in a 2018 Donor’s Conference in Paris — $10.2 billion in loans and $860 million in grants – will continue to be withheld. Furthermore, there may be sanctions imposed by those potential donor countries on individual political figures in Lebanon. The first day of his visit was heavy on symbolism – Macron planted a cedar of Lebanon to commemorate the centenary of the birth of modern Lebanon, observed a fly-by of French planes in formation, whose red, white, and green contrails represented the colors of the Lebanese flag, and visited the famous singer Fairouz, a Christian Lebanese, in her icon-filled apartment, a living reminder of the contribution of Christians to Lebanese culture. On his second day he got down to business, meeting with political leaders, including Mohammed Raad, the head of Hezbollah’s parliamentary bloc.

He had met meet Raad before, on his first trip to Beirut, two days after the blast, on August 6. On that occasion Macron had pressed Raad to declare his sole loyalty to Lebanon and the Lebanese.

French President Emmanuel Macron confronted the head of Hezbollah’s parliamentary bloc Mohammed Raad during a visit to Beirut on August 6, asking him “are you Lebanese?” and telling him to “prove” it, according to French newspaper Le Figaro.

“I want to work with you to change Lebanon, but prove that you are Lebanese” said Macron.

Macron put his finger on a touchy subject: Hezbollah likes to claim it is the Lebanese“national resistance” to Israel. But it doesn’t further Lebanese interests. It has made life more dangerous for the Lebanese. It is a puppet of its paymaster Iran, sending its fighters to Syria to prop up Assad’s despotism, and to Yemen to support the Houthi rebels. Neither of these campaigns has anything to do with “defending” Lebanon; they are about supporting a foreign country – Iran – in its attempts to build a “Shi’ite crescent” from the Gulf to the Mediterranean. So Macron asked Mohammad Raad point blank to declare himself: is he Lebanese, does he want to help the Lebanese, is he working to help the Lebanese people, or is he, instead, an agent of Iran? As Macron notes, “everyone knows you have an Iranian agenda.” Raad apparently did not answer these uncomfortable questions: had he done so, his asseverations of being a Lebanese patriot would have only evoked scorn.

The French president recommended that Hezbollah “come home, leave Syria and Yemen, and do the job here to build a state – because this new state will also benefit your families,” according to Le Figaro.

Macron wants Hezbollah to stop being a puppet of Iran. It should end its foreign adventurism on behalf of Tehran, pull its troops back from Syria, where they have helped keep the despot Assad in power, and from Yemen, where they help the Houthis, and return to being a strictly Lebanese organization, promoting the welfare only of the Lebanese. That welfare is not promoted by Hezbollah fighters in Syria and Lebanon, nor by Hezbollah threatening to drag Lebanon into a war with Israel. Hezbollah, Macron told Mohammad Raad, should “do the job here [in Lebanon] to build a state.” It’s a powerful appeal: the Lebanese in Hezbollah should think only of Lebanon’s welfare.

But we already know that inside Lebanon, Hezbollah is not interested in “building a state,” but has taken the side of the permanent political elite, and its fighters have violently suppressed those Lebanese who, starting last October, protested against the government’s mismanagement and corruption. In ending its foreign interventions in Syria and Yemen on behalf of Iran, would Hezbollah be returning, as Macron urges, “to build a state” run by uncorruptible technocrats, or would it continue to support the corrupt powers that be? He’s making an eloquent appeal to Mohammad Raad, hoping to elicit his sense of patriotism: “But are you Lebanese – yes or no? Do you want to help the Lebanese – yes or no? Are you talking about the Lebanese people – yes or no?” Those three questions have been all over the Lebanese media, and social media too: does Hezbollah want to further the interests of Lebanon, or continue to support the very different interests of Iran?

When asked during a press conference soon afterward if France would accept Hezbollah members being in a future government, Macron responded that “Hezbollah has deputies elected by the Lebanese; it is part of the political scene.”

In other words, if Hezbollah calls its fighters back from abroad, under terrific pressure from donor nations who are withholding their loans and grants, it still, in Macron’s view, has a role to play in Lebanon (“it is part of the political scene”), as a political actor representing – just like the Amal party – the interests of Lebanese Shi’a. No one should object to that: Hezbollah as a political party like any other. But it would no longer be an armed force, more powerful than the national army, running a state-within-a-state, terrorizing fellow Lebanese who oppose it, and capable of starting a war with Israel.

Macron’s meeting with Raad was the first of its kind since the founding of Hezbollah. The terrorist group announced that it saw the president’s visit as “positive,” with some members of the group seeing the meeting as “equivalent to international recognition.”

The meeting was hardly, as Hezbollah members seem to think, “positive,” much less any kind of “international recognition” of the terror group. In his meeting with Mohammad Raad, President Macron was not praising the group, nor extending some kind of official recognition to it. He was determined to put Raad on the spot by asking him to declare his identity, and his loyalty: was he a Lebanese patriot first and foremost, or was he loyal to Iran, for as Macron said in his first meeting with Raad, “everyone knows you have an Iranian agenda.”

The French source in Beirut told Le Figaro that Macron told Hezbollah: “We do not bore you on the question of your weapons and on two or three points that are important to you – but in return, you [must] put oxygen in the system. Agree to play the game, because we cannot continue like this.”

“We do not bore you on the question of your weapons”? But that is an essential matter to discuss with Hezbollah. Lebanon is the only country in the world where an armed group, not under the government’s control, is more powerful than the country’s own armed forces. With its vast arsenal, including 150,000 missiles and rockets, Hezbollah continually threatens to drag Lebanon into a war with Israel – as it did in 2006 – that the Lebanese do not want. That “question of your weapons” is not something for Macron to treat as a minor matter (“we do not bore you on the question of your weapons”); it’s at the heart of Hezbollah’s power, and the damage it has caused in the past, and can in the future cause, to the people of Lebanon. Unless Hezbollah is disarmed, it will continue to threaten Israel, may start a war with the Jewish state through inadvertence or by design, and that war will inevitably lead to great damage to Lebanese infrastructure by the IDF, as it seeks to destroy the weapons Hezbollah has hidden in civilian buildings – schools, stores, hospitals, libraries – all over southern Lebanon and southern Beirut.

Macron’s forthright questions to Mohammad Raad in early August continue to resonate. They raise the issue on the minds of most Lebanese: does Hezbollah have the interests of Lebanon at heart, or only those of Iran? Does Hezbollah recognize the damage it caused Lebanon by starting the 2006 war with Israel? Will it stop denying its role, and instead assume total responsibility, for the Beirut blast? And if so, how does the terror group propose to make amends for the 190 dead, 6,000 wounded, and $10-$15 billion in property damage its carelessness has caused? Does Hezbollah understand why it should no longer suppress Lebanese protesting against the management and corruption of the government, as it did last October and since, but leave them alone or, even better, take the side of the protesters instead?

Macron has been wrong in one respect: his minimizing the need to disarm Hezbollah. Those arms are central to its power, and its ability to threaten other Lebanese.Those arms are also the reason that Israel may be forced to go to war against the terror group, in order to destroy the permanent overhanging threat of those 150,000 rockets and missiles hidden all over southern Lebanon. Should another Israel-Hezbollah war break out, it is Lebanon that will necessarily suffer great damage to its infrastructure, much more than it did in 2006. The only way to insure that such a conflict does not break out is to have Hezbollah turn over all of its major weapons (small arms could be kept) to the Lebanese Armed Forces, which might decide, at Western urging, to destroy them. That would be a great relief to all those in Lebanon who do not want the country ever again to be dragged by Hezbollah into another ruinous war, and an even greater relief to Israel, the permanent target of that colossal armory.