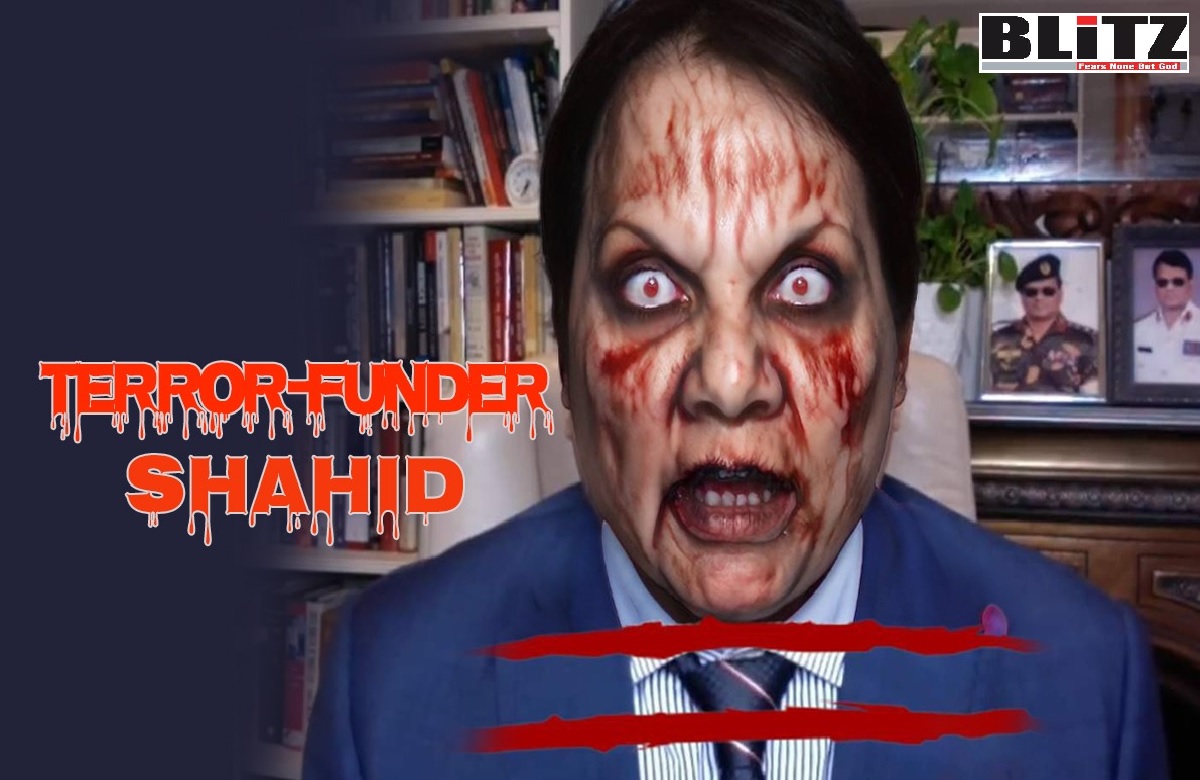 George Soros, the Jewish multi-billionaire spends his wealth towards demonizing Jews and destruction of Israel. To Jews and Zionists, Soros is known as the worst-ever evil person who not only patronizes anti-Semite elements, he also promotes socialist, Islamists and leftist in the United States, which can only be termed as anarchism. Similarly, several lawmakers of the British Tory Party, particularly Stephen Hammonds have been shamelessly romancing with an individual named Shahid Uddin Khan, an INTERPOL wanted notorious terror-funder, criminal, money-launderer and members of infamous Dawood Ibrahim clan.

In 2018, Shahid Uddin Khan fled Bangladesh when several agencies began investigating his crimes, which include tax evasion, terror-finance, money-laundering, illegal land-grabbing and numerous forms of criminal activities. In personal life, Shahid Uddin Khan, his wife Farzana Anjum Khan, daughters Shehtaz Munasi Khan, Parisa Pinaz Khan and Zumana Fiza Khan are notoriously anti-Semitic, Jew-haters and enemies of the State of Israel. During his stay in Bangladesh, Shahid Uddin Khan targeted me and my newspaper BLiTZ simply because of our principle of confronting radical Islam and jihad; denouncing anti-Semitism and Holocaust denial; promoting interfaith harmony; and advocating normalization of relations between Israel and Muslim nations, including Bangladesh. Since 2011, Shahid Uddin Khan continued threatening me and members of BLiTZ stating, if we did not “change” our editorial policy and if I did not stop supporting Israel, he would make sure me and other members of BLiTZ face “dire consequences”. As we did not pay any heed to such foul threats, Shahid Uddin Khan assigned one of his cohorts named Sajjad Hossain in filing a false case against me with local police station in Dhaka. Subsequently, Shahid Uddin Khan used his evil influence in getting me arrested from my residence in November 2012 at late hours of the night. As I was taken to the police station, Shahid Uddin Khan sent his cadres, who took my photograph and video and said, “now you will feel the heat of supporting Israel and those pigs and apes [Jews]”. Next day, when I was produced before the court, Shahid Uddin Khan’s man Sajjad Hossain and their lawyers told the court, I am a “Mossad agent” and “ally of Jews and Israel” and asked the court to reject my bail petition and send me to prison. Accordingly, I was sent to prison.

In prison, Shahid Uddin Khan hired a prison staff to assassinate me by entering the isolated cell, where I was kept. One night, at around 3:53 am, I got terrified seeing a prison guard illegally entering my cell by opening the lock. As I woke up and started shouting, the guard hurriedly left the cell and locked it again. In the morning, when I raised the matter with the prison authorities, they remained silent and did not take any action. Only one staff, later told me privately, “why you have entered into enmity with Colonel Shahid Uddin Khan? You cannot survive as he may attempt again to get you killed”.

As most of the people know, when an Islamist coalition government of Bangladesh Nationalist Party (BNP) and Jamaat-e-Islami (JeI) were in power, they brought false charges of sedition, treason and blasphemy against me as I was arrested from the Dhaka International Airport in November 2003 on my way to Tel Aviv for attending an international peace conference jointly organized by the Tel Aviv University and the US State Department. After 17 months, I was released on bail at the relentless efforts of then Republican Congressman Mark Steven Kirk (who later became a Senator from Illinois). Back in 2007, the United States Congress passed a bi-partisan resolution (HR-64/2007) in my defense by 409 votes. After almost seven years of my release from the prison (I was released in April 2005), anti-Semite Shahid Uddin Khan once again started exerting his evil influence on the trial court with the instruction of awarding me death penalty or life-term imprisonment. Since the court did not have any evidence against the outrageous charges brought by BNP and Jamaat, simply because of Shahid Uddin Khan’s continuous pressure, I was awarded rigorous imprisonment for 7 years. During my stay in the prison, Shahid Uddin Khan also instructed the prison authorities to deny me from meeting my family members – even once a month. It may be mentioned here that, the European Union Parliament, Parliament of Australia and the UK Parliament had also passed resolutions in my defense.

In the resolution, passed on November 21, 2006s, the UK Parliament said: “That this House declares its support for voices of peace and moderation in the Muslim world such as the Bangladeshi journalist Salah Uddin Shoaib Choudhury, who stands trial for sedition, treason and blasphemy, a charge which carries the death sentence; commends Mr Choudhury for exposing the growing threat of extreme Islamism in Bangladesh; deplores the conduct of the judge in the trial, Mohammed Momin Ullah, who has said he is not interested in evidence and will not allow any defence witnesses into the court record; notes that the Public Prosecutor in Bangladesh has said that there is no evidence to support the charges; is encouraged that international pressure has persuaded the Bangladesh government to delay Mr Choudhury’s next court date until 2007 and to restore the police protection at his house that had been recently removed; and urges the United Kingdom Government to press the government of Bangladesh to protect Mr Choudhury from all forms of harassment”. 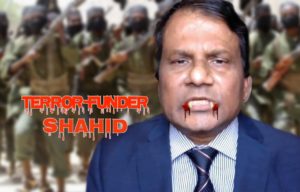 On serving the 7-years rigorous imprisonment, on my release from prison in July 2018, as I resumed my responsibility as the editor of BLiTZ, Shahid Uddin Khan and his daughters, Shehtaz Munasi Khan, Parisa Pinaz Khan and Zumana Fiza Khan started abusing me on social media by branding me as “enemy of Allah”, “agent of pigs and apes”, and “an infidel”. His daughter Parisa Pinaz Khan was even making extremely nasty and derogatory remarks at me.

Now, this notorious man has become a great friend of UK Tory Party’s MP Stephen Hammonds. Mr. Hammonds has been continuously helping Shahid and his family members in exchange of “donation”, which Shahid has admitted in a recent video. Stephen Hammonds is also helping this INTERPOL wanted convicted fugitive in getting acquainted with other lawmakers from his party, and he even is cooperating with Shahid Uddin Khan in “toppling-down” the democratically elected government in Bangladesh. Mr. Hammonds has also become a cohort of Shahid Uddin Khan in enforcing rule of insane in Bangladesh by trashing the current constitution of the country.

I have lots of evidence about secret meetings between British MP Stephen Hammonds and terror-funder Shahid Uddin Khan. Here is my question – why this British MP is cooperating with a proven criminal, a terror-funder and notoriously anti-Semite and Jew hater? If the British media as well as respected members of the Tory and Labour Party will dig into the matter, I am ready to provide substantial evidences on each of the matters I have stated above.

In his Al Qaeda-patterned latest video, Shahid Uddin Khan brands me as a “non-journalist” and BLiTZ as “illegal publication”, despite I am in journalism since 1989 and have served with a number of local and international news outlets. For the last 19 years, I am running BLiTZ as its editor. BLiTZ is a registered newspaper in Bangladesh (Registration number DA-5025). Still, Shahid Uddin Khan portrays me as a “non-journalist” and BLiTZ as an “illegal newspaper”! Why? Because his poison-filled anti-Jew and anti-Semite mindset does not allow an anti-militancy newspaper like BLiTZ to exist in the world. He wants me and BLiTZ annihilated.

Hopefully my friends and supporters throughout the world, especially those who too are vigorously confront religious extremism, terrorism, anti-Semitism, Holocaust denial and Israel-bashing would stand in my defense and send a strong message to British MP Stephen Hammonds and other who are collaborating with terror-funder Shahid Uddin Khan stating – STOP HERE NOW!

While the United Kingdom is known as the ‘Mecca’ of democracy, for any member of the British House of Commons maintaining wrongful romance with an INTERPOL wanted convicted fugitive and terror-funder is certainly deplorable. Hopefully, Tory Party’s MP Mr. Stephen Hammonds will realize his blunders and immediately distant from mixing with such insanely dangerous man.