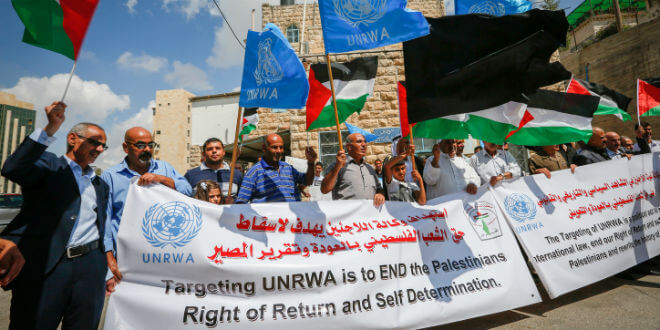 In Arabic there is no existence of the word – Palestine. It is a Hebrew word, meaning invaders. Palestinians are originally from Jordan, where they need to migrate – editor.

And I will wipe out the inhabitants of Ashdod And the sceptered ruler of Ashkelon; And I will turn My hand against Ekron, And the Philistines shall perish to the last man — said Hashem. Amos 1:8 (The Israel Bible).

The Palestinian Authority is boycotting the White House which has responded by cutting off massive amounts of funding and shutting down the PLO Mission in Washington. One rabbi, an end-of-days expert, believes that this meteoric decline in the Palestinians’ political clout may be because their relevance in the end-of-days process has now expired.

The U.S. State Department announced on Monday that it was shutting down the Palestinian Liberation Organization (PLO) Mission in Washington. This is a result of the Palestinians petitioning the International Criminal Court in the Hague to initiate a criminal probe against Israel. This violates a U.S. law passed by Congress in 2015, which mandates the closing of the PLO Mission if the Palestinians initiate or support an investigation by the ICC against Israel.

The decision to close the mission comes just two weeks after the White House announced it was withholding $200 million in aid to the the PA and Hamas-run Gaza. The White House hopes the economic cutbacks will incentivize the Palestinian government to negotiate with Israel.

After cutting aid to the United Nations Relief and Works Agency (UNRWA) in January, the U.S. announced two weeks ago that they would no longer contribute to the organization. The U.S. is the major contributor to the organization which is currently in an economic crisis, scrambling among the other nations for funding. One of their chief criticisms of the organization is that it grants refugee status to the descendants of Palestinian refugees. This open-ended definition has artificially swelled the number of Palestinian refugees; from some 20,000 of those who actually fled Israel between 1947-1949, to more than 5 million of their descendants currently classified as refugees by UNRWA. The PA has insisted on the right of return for the entirety of the claimed Palestinian nation as a precondition to negotiations. Even a partial influx of this proportion would lead to the demographic demise of Israel as the Jewish state.

America’s actions have been met with Palestinian belligerence. The PA has boycotted the U.S. since President Trump’s historic recognition of Jerusalem as Israel’s capital in December, accompanied by his decision to move the embassy from Tel Aviv. PA officials have refused to meet with any representative of the U.S. since that announcement, rejecting the President’s peace process, sight unseen. Last week, the PA conditioned the resumption of direct negotiations with Israel on Trump’s replacing special envoy Jason Greenblatt.

“Until now, the Palestinians have been playing the entitled victim card so none of the normal rules of diplomacy applied to them. Before 1967, Israel was the underdog standing against all the Arab nations. By making it Israel versus the Palestinians instead of Israel versus 300 million Arabs, they are able to portray Israel as the aggressor and the oppressor. The attitude of much of the left-wing is that whoever is bigger and stronger is ‘wronger.’ The Palestinians have literally been getting away with murder precisely because they are the victims. Even when they kill themselves trying to kill Israelis, they are still portrayed as victims.”

“Trump is a dealmaker and Abbas is not willing to play ball. Trump is a businessman and has changed the rules of the game. He took Jerusalem off the table. He is making financial aid dependent on results. Abbas is not used to this.”

“Rome changed the name from Judea to Philistia 2,000 years ago to erase the Jewish connection to the land. By claiming the indigenous people are the Palestinians and not the Jews, the Arabs with the support of much of the world are trying to do the same thing. Western support for Israel came largely out of guilt for the Holocaust and what the Nazis did to the Jews. If Israel’s treatment of the Palestinians can be equated with the Nazis treatment of the Jews, or apartheid, then the Jews are no better than the Nazis and Europe no longer has to feel guilty.”

Rabbi Pinchas Winston, a prolific end-of-days author, believes the political marginalization of the Palestinians is a sign that they have fulfilled their purpose in the Messianic process and are no longer necessary.

“This is clearly a divine process since it was totally unexpected. It certainly wouldn’t have happened under Obama and probably not under any of the previous presidents who promised to move the embassy but didn’t.”

To illustrate his point, he related a midrash (homiletic teaching) from the Talmud (Tractate Baba Batra 73b). According to the Talmud, Rabbah Bar Hana was traveling on a ship and went ashore to cook some food. The island turned out to be an enormous fish covered in sand. Feeling the heat of the fire, the fish turned over, sending Rabbah Bar Hana scrambling for his ship, which fortunately was ready to sail.

“Rabbeinu Yaakov taught that this peculiar story in the Talmud is actually an allegory of what will happen in the days before Messiah,” Rabbi Winston said. “He explained the Talmud as teaching that the Jews will return to our land but we will end up ruling over another nation. The other nation will appear weak and small but they will actually turn everything upside down, causing disproportionate amount of suffering for the Jews.”

“This is clearly referring to the Palestinians,” Rabbi Winston said. “So much of the politics revolves around the Palestinians. They have become the poster-child for Israel being the abuser, but for some reason, they have also become part of the platform of every liberal cause, no matter how unrelated to the region. Their only purpose for existing is to play this role for Israel in the end-of days. They were abused by all the Arab nations but no one paid any attention until they took this prophesied role.”

“If the ‘boat is ready,’ if the Jews are ready for Messiah, everything will be fine and we will enter into the Messiah,” Rabbi Winston explained. “If the Jews are not ready, we will drown from the problems this small nation will cause us.”

“As we approach the Messiah, the Palestinians will have served their purpose and will become irrelevant, ignored by the people who currently support them as a tool against Israel,” Rabbi Winston concluded.

Like Loading...
Recommended for you:
Continue Reading
Advertisement
You may also like...
Related Topics:After cutting aid to UNRwA, Palestinians boycotted President Trump since his moved US embassy, The PAS has boycotted the US