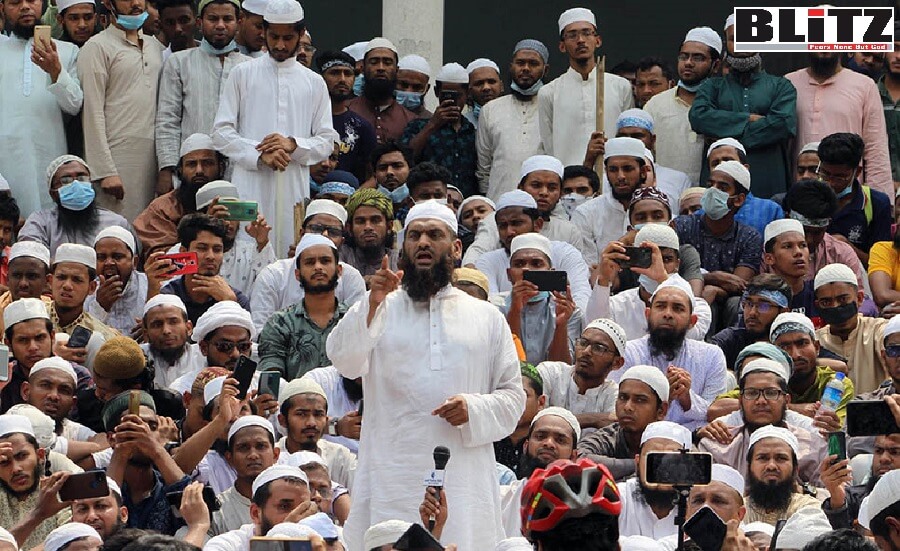 Arrested leaders of pro-Caliphate Hefazat-e-Islam are currently being interrogated by law enforcement and intelligence agencies. They have started giving bone-chilling information by revealing, Hefazat-e-Islam, with the financial help from Pakistani ISI as well as Bangladesh Nationalist Party (BNP) and Jamaat-e-Islami (JeI), were plotting to spread anti-Modi protests throughout the country and later use it in unseating Awami League government. They said, Hefazat’s plan was to transform a secular Bangladesh into a radical Islamic republic similar to Afghanistan.

The investigating agencies said, Hefazat although has earlier pretended to be non-political entity, most of the leaders of this organization belong to Islamist political parties, meaning, Hefazat-e-Islam is their combined platform. It is not a non-political organization anymore, the agency sources said.

Hefazat-e-Islam leaders consider the organization as the only option of riding into power by using madrassa teachers and students. Moreover, for Hefazat, it was convenient to hide its political and even terrorist activities under the garb of madrassas.

Most alarming information obtained by the investigators is – Hefazat-e-Islam leaders were not only willing to unseat Awami League government and establish Caliphate in Bangladesh, they also were on the process of establishing a military wing copying Islamic State, with the ambition of gradually expanding network inside India, Myanmar, Nepal and other Asian nations.

Although majority of the madrassa students come from extremely poor families, in the recent years, Hefazat-e-Islam leaders are seen buying luxurious vehicles, properties and living expensive lives. Investigation agencies are yet to find out the source of such huge income of the Hefazat leaders. According to sources, some of the detained Hefazat-e-Islam leaders have told the interrogators that – majority of the fund for the organization were coming from overseas, they have not yet provided details on such foreign source. Although some of the top leaders of Hefazat have already revealed Pakistan’s funding Hefazat activities, they are yet to give information about the fund they have been receiving from Qatar and few other Afro-Arab nations.