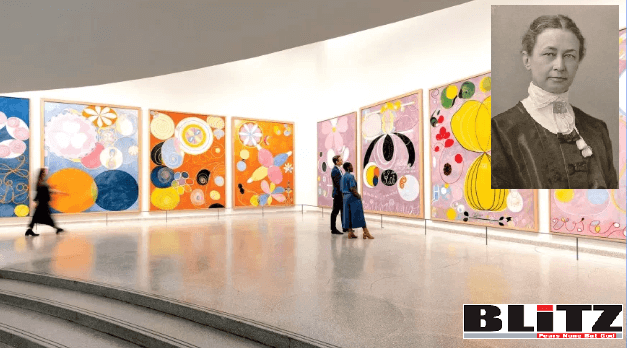 The Guggenheim’s strange and wonderful exhibition of Hilma af Klint’s groundbreaking, yet largely unknown body of abstract art is an important event – one that challenges us to not only rethink the early history of twentieth century abstract art, but to recognize her vision of art and reality as unique, authentic, and deliciously puzzling.

Af Klint was a formally trained and respected portrait and landscape painter in Stockholm, who as a young woman became involved in spiritualism, theosophy, as well as Rosicrucianism. By 1906, af Klint was creating abstract paintings, many years before Vasily Kandinsky and Piet Mondrian – however she kept them private, maintaining that the world was not yet ready to see her work; and in fact she requested that they not be seen for twenty years following her death. We can see the Rosicrucian influence in this decision: a guiding principle of the spiritual movement was its anticipation of a “universal reformation of mankind,” when a long hidden, secret science will finally be received by humanity.

In 1906, af Klint’s art moves away from conventional representation and toward a different kind of subject matter, with an entirely new spiritual intention. The origin of this project is also quite unlike anything else – according to af Klint, spirits who she channeled in the course of regular séances spoke and commissioned these paintings. The project was driven by a metaphysical conviction and motivation – that is, to represent the numerous stages of a transcendent reality beyond the observable world.

Rosicrucian thinking is informed by Kabbalah (Jewish mysticism) and hermeticism. One of the fundamental doctrines that both of these teachings share is the notion of ‘as above, so below’ – in other words, whatever happens on one level of reality, also happens on every other. According to this way thinking, each human being is a microcosm of the universe into which all the potencies of creation have been placed, so that an activity below, stimulates a corresponding activity on high. This doctrine is essential for understanding what af Klint was up to: her work is not simply trying to express this teaching, but is itself meant to be seen as an embodiment of it.

When she was seventeen, af Klint’s interest in spiritualism began. Her sister died around this time, and initially her curiosity grew out of her desire to be in contact with the dead. It was not long before the desire evolved: through contact with higher spiritual entities, af Klint began seeking metaphysical insight and understanding.

During séances in 1904, spiritual guides proposed the construction of a temple that would house spiritually derived works of art. The commission for such a series of works – works created specifically for a future temple – fell to af Klint. She agreed to carry out the “Great Commission” when other members of her spiritualist group, The Five (De Fem), declined due to a concern that such a project – demanding close and sustained contact with the spirit realm – could lead to madness.

Between November and December 1907, The Ten Largest were created. They constitute nothing less than a wholly new approach to painting – something unprecedented and unique, unlike anything else that has come before. They are breathtaking in their enormous vitality: they are alive, bursting with energy and color. While they are abstract paintings, they are also doubtlessly drawing on the world for content – whether it be the forms of Swedish folk art, the kinds of representation found in scientific diagrams, or the symbols associated with various spiritual movements. All these elements and visual modes are combined and transformed in new and remarkable ways.

In af Klint’s symbolic vocabulary, blue represents the female and yellow the male. The notion that these two colors constitute an essential dichotomy was likely derived from Johann Wolfgang von Goethe’s Theory of Colours (1810), which she was known to have kept in her library. Goethe’s book has been widely rejected and dismissed as ‘worthless still-born dilettantism’, especially for his polemic against Isaac Newton, whose Opticks demonstrated that colorless rays of light contained the power to provoke sensations of color. Goethe did not object to Newton’s view that color could be measured in terms of wavelength; rather, his error was to adopt an approach ‘that banished the spirit of living contemplation.’ Newton did not give the complete story: his theory was a part masquerading as a whole. Why does blue have the quality of blue and yellow the quality of yellow? Newton’s reductionist theory did not make colors intelligible in themselves – but instead reduced them to measurable wavelengths of colorless light.

Goethe can help us to appreciate af Klint: she takes much more from Goethe than the simple dichotomy between blue and yellow. Her work is no less a rebuke of that Newtonian universe of meaningless fragmentation; like Goethe, she proposes a sensuous and colorful world shaped by principles of order and patterning.

The Paintings for the Temple are presented in a number of groups; and just as the groups were meant to be viewed in a particular order, so too in each series the paintings were likewise to be seen in a certain progression. Few symbols are as important for af Klint as that of the spiral – which represents physical and spiritual evolution, a concept which was central not only to Darwinian thought, but to theosophy, which views evolution as a process that goes beyond biology and ultimately pervades the cosmos. The Paintings for the Temple were to be housed in a spiraling structure, not unlike the Guggenheim itself – which makes the current exhibition all more extraordinary.

In 1915, af Klint completed the Painting for the Temple, a project which by the end included 193 paintings and drawings. These works break with the language of representation, they epitomize a shift away from figuration and realism (at least in any conventional sense). Looking at af Klint’s work, it is hard to escape the feeling that this artist has secrets to tell – secrets that are worth the hearing and that she is ready to share. Part of the immense pleasure is that, at the same time, she also refuses to simply give them over. She makes us work for them – she delays, sustains and prolongs.

The truth is that, as with any genuine art, these are works that exceed any rational reiteration. At times her great project – the otherworldly “commission” that she undertook – seems almost like a metaphysical treasure map, a kind of guide to navigating ever higher realms of reality, finally culminating in a vision of transcendent unity. But the true greatness of the work is that it eludes any such straightforward presumptions; that her paintings are finally irreducible to a diagram – though often the imagery appears to be precisely that. Even at her most metaphysical, she remains a painter through and through – and as every great painter knows, to give is to withhold, and there is no pleasure where there is nothing risked.