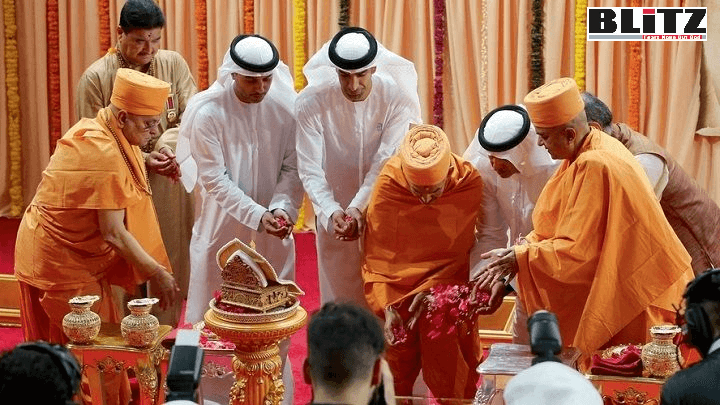 According to the Future of World Religion report, some countries will witness doubling of the number of Hindus by 2050 – mostly because of massive migration and increase in fertility rate. The report said, Hinduism has become fastest-growing religion in Pakistan and Saudi Arabia, while more than one million Hindus are expected to move to different regions, especially in the Middle East and western nations – over the next four decades.

In Saudi Arabia, Hindus currently make up about 2 percent of the population and this size will cross 5 percent by 2050.

The third country in Asia where Hinduism is growing is Thailand, where the Hindus will go from 0.1.5 percent of the Thai population to over 2 percent by 2050. Similarly, Hindu population will significantly grow in Ireland, Belgium, Italy, Greece, Britain, Canada, Australia and the United States.

The number of Hindus is also increasing fast in countries like Iran and Israel.

In the US, Hindu entrepreneurs have already succeeded in establishing dominance over the hotel, motel and catering industry. Similarly, there is significant increase in number of Hindu-owned business establishments in most of the western nations – including Australia and Canada.

It is anticipated that by 2050, there will be large number of Hindu representatives in the US Senate and Congress as well as key government establishments, including CIA and FBI.

Hinduism is the third largest religion in the world. Hindu beliefs are vast and diverse, and thus Hinduism is often referred to as a family of religions rather than a single religion. Within each religion in this family of religions, there are different theologies, practices, and sacred texts. This diversity has led to an array of descriptions for Hinduism. It has been described as henotheism, polytheism, pantheism, and monotheism. Hinduism is one of the oldest living religions in the world. Hindus made up about 15 percent of the population in 2010, when there were one billion Hindus in the world. Almost 99 percent of Hindus live in the Indo-Pacific region in 2010.

According to Pew Forum, Hindus are anticipated to continue to be concentrated primarily in the Indo-Pacific region in 2050. Hinduism is the largest religion in the countries of India and Nepal. Approximately 94% of the world’s Hindus live in India. 79.80 percent of India’s population is Hindu, accounting for about 90 percent of Hindus worldwide. Hinduism’s 10-year growth rate is estimated at 20 percent (based on the period 1991 to 2001), corresponding to a yearly growth close to 2 percent.

According to a 2017 Pew Research Center survey, between 2010 and 2015 “an estimated 109 million babies were born to Hindu mothers and roughly 42 million Hindus died, meaning that the natural increase in the Hindus population – i.e., the number of births minus the number of deaths – was 42 million over this period”.

Like other religious traditions present during the time period of the classical era, Hinduism flourished under various empires which supported the religion. Rulers sponsored Hindu temples and art, while also supporting other religious communities. Of note is the Khmer Empire, which extended over large parts of Southeast Asia. During the reign of Suryavarman II,

Vaishnavism spread throughout the empire. The famous Angkor Wat temple in Cambodia was commissioned during this time.

Hinduism is the fastest-growing religion in Ireland, predominantly a Christian country. The country’s Hindu population grew 34 percent in five years, according to the Ireland census, conducted in April 2016 by its Central Statistics Office (CSO) and released on April 6, 2017. In contrast, the overall population growth in Ireland was 3.8 percent. It is anticipated that by 2050, Hindus will play dominant role in Ireland’s politics and economy.