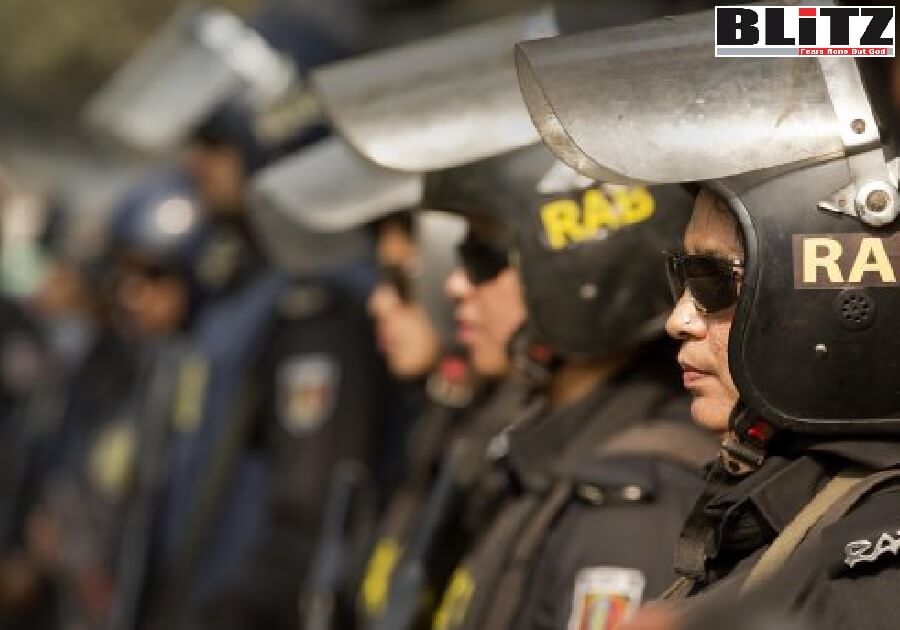 As Bangladesh, under the magnanimous leadership of Prime Minister Sheikh Hasina has been relentlessly combating religious extremism, terrorism, radical Islamic militancy and drugs, it is indeed very unfortunate that US Congressman and Chair of the House Foreign Affairs Committee Gregory W Meeks has voiced his strong support for the Biden Administration’s designation of Rapid Action Battalion (RAB) and several of its officials.

Congressman Gregory W Meeks in his statement said: “I believe sanctions can be most useful when they are targeted and don’t believe wholesale sanctions on Bangladesh are currently warranted”.

While I express my profound gratitude to Congressman Gregory W Meeks for his strong stand against imposing any wholesale sanctions on Bangladesh, it is important for the esteemed members of the US Congress and Senate to first of all know the excellent and praiseworthy role Rapid Action Battalion (RAB) has been playing in combating religious extremism, terrorism, radical Islamic militancy and drugs. Because of its brilliant performance, Rapid Action Battalion and its members have become target of patrons and promoters of terrorism, jihad and narco-trade. For years, a vested interest group has been spending lavishly towards lobbyists and even by establishing under-table dealings with some of the influential figures in the Capitol Hill. Notoriously anti-US forces like Jamaat-e-Islami is leading such notoriety with the ulterior agenda of destabilizing internal situation in Bangladesh and damaging the reputation of Bangladesh’s secularist ruling party – Awami League.

I would like to humbly mention here that my relations with the esteemed members of the US Congress and Senate dates back to 2003, when a large number of the members of the House and Senate stood in my defense as then ruling coalition government of Bangladesh Nationalist Party (BNP) and Jamaat-e-Islami brought ridiculous charges of sedition, treason and blasphemy against me for the “crimes” of confronting religious extremism and militancy; for denouncing anti-Semitism and Holocaust denial; for advocating interfaith harmony; and for defending the State of Israel.

My friends in the US Congress brought a bi-partisan resolution, which was sponsored by Republican Congressman Mark Steven Kirk (he later became Senator from Illinois as Barack Obama became the president) and Democratic Congresswoman Nita Lowey. A total number of 402 members of the US Congress had voted in favor of this resolution HR-64.

This resolution was passed by the US Congress in March 2007. Yes, it was about me! The resolution HR-64 said:

Whereas Salah Uddin Shoaib Choudhury is a Bangladeshi journalist who, because of his beliefs in an interfaith dialogue between Jews and Muslims and criticism of Islamic extremism, is on trial for sedition, an offense punishable by death;

Whereas on November 29, 2003, Mr. Choudhury was arrested at Zia International Airport in Dhaka, Bangladesh, on his way to board a flight bound for Tel Aviv; Mr. Choudhury’s passport was seized, along with considerable sums of money and several personal items; on that same day police raided Mr. Choudhury’s home and newspaper offices, seizing files, computers, and other valuables;

Whereas Mr. Choudhury was detained in Dhaka Central Jail for a passport violation, then subsequently charged with sedition; Mr. Choudhury suffered harsh interrogation techniques and received no treatment for a debilitating case of glaucoma; Mr. Choudhury’s incarceration lasted 17 months without legal recourse;

Whereas on April 30, 2005, after intervention by the United States Department of State and congressional offices, Mr. Choudhury was released on bail;

Whereas in the subsequent months, senior members of the Bangladeshi Government made continuous public promises that there was no substance to Mr. Choudhury’s pending charges and that all charges would be dropped;

Whereas on September 29, 2005, Mr. Choudhury was awarded the “Freedom to Write Award” by PEN USA;

Whereas on May 5, 2006, Mr. Choudhury was awarded the American Jewish Committee’s Moral Courage Award in absentia in Washington, D.C.; two days prior to Mr. Choudhury receiving the award, after returning Mr. Choudhury’s passport and appearing to allow him to attend, senior Bangladeshi Government officials issued threats to prevent him from leaving the country;

Whereas on September 18, 2006, a judge with alleged ties to an Islamic extremist party ruled that Mr. Choudhury will stand trial for sedition; the judge made this ruling despite the Public Prosecutor’s testimony in court days before that the government did not have evidence and would not object to the charges being dropped;

Whereas members of the United States Commission on International Religious Freedom visited with Mr. Choudhury on their trip to Bangladesh in February and March 2006;

Whereas on October 6, 2006, the United States Commission on International Religious Freedom wrote a letter to U.S. Assistant Secretary of State for South and Central Asian Affairs Richard A. Boucher calling on the United States Government to strengthen the “voices of moderation” in countries like Bangladesh where the rule of law, democratic institutions, and respect for human rights are under assault by violent extremists; the Commission identified Mr. Choudhury as one of those voices that should not be silenced;

Whereas, according to the Department of State’s 2005 Country Report on Human Rights Practices in Bangladesh, “Attacks on journalists and newspapers, and government efforts to intimidate them, political party activists, and others, occurred frequently.”; and

Whereas moderate voices in the Muslim world must be supported and protected to advance the security of the United States and its allies: Now, therefore, be it

Resolved, that it is the sense of the House of Representatives that—

(2) the Government of Bangladesh should immediately return all of Mr. Choudhury’s confiscated possessions; and

(3) the Government of Bangladesh should cease harassment and intimidation of Mr. Choudhury and take steps to protect Mr. Choudhury.

For passing this resolution, I shall remain eternally grateful to each of the members of the US Congress. To me, many of those esteemed members are like my own family, as I have emotional bondage with them.

But now my heart-bleeds, seeing my friends in the US Congress and Senate, being misled by the propaganda of Bangladesh Nationalist Party and Jamaat-e-Islami have supported imposition of sanctions of Rapid Action Battalion (RAB) and few officers of this elite force.

For my friends in the US Congress and Senate, here are some information on Rapid Action Battalion:

Describing activities of RAB, Chowdhury Abdullah Al-Mamun, Director General said in organization’s website: “Bangladesh is a developing country. One of the major obstacles to our progress is the volatile law and order situation. In such a situation when every member of the society was suffering from uncertainty, the government planned to form an elite force to make the activities of the police force more dynamic and effective. After a series of meetings, discussions and research, the government, The Rapid Action Battalion under the supervision of the Ministry of Home Affairs decided to form an elite force called RAB Forces. The Rapid Action Battalion (RAB) made its public debut on March 26, 2004 by participating in the National Independence Day Parade. Soon after birth, the battalions of this force are engaged in organizational activities and start gathering intelligence information about their respective areas…”.

Responsibilities of RAB include:

Illegal weapons, ammunition, explosives and other such items were recovered,

Assist other law enforcement agencies in maintaining law and order,

Collecting intelligence about terrorism and terrorists,

Conduct investigation activities of any crime as directed by the government,

To perform any national duty as directed by the government.

Due to courageous efforts of the members of RAB, notorious jihadist groups such as Harkatul Jihad (HuJI), Jamaatul Mujahedin Bangladesh (JMB), Ansar Al Islam (outshoot of Al Qaeda in Indian Sub-Continent), Ansarullah Bangla Team (ABT), which is responsible for murdering American citizen Avijit Roy and critically injure his wife and secularist bloggers as well as many anti-jihadist individuals and even foreign nationals; have been substantially contained. Performances of RAB had succeeded in dismantling various separatist and terrorist groups from the northeastern part of India, which were using Bangladeshi soil as terrorist launchpad.

On February 26, 2015, Roy and Ahmed, both Bangladesh-born U.S. citizens, were visiting Dhaka to attend a book fair when they were attacked by assailants with machetes.  Roy was killed and Ahmed survived with critical injuries.

This investigation remains open, and we are seeking information that will assist law enforcement agencies in bringing to justice the perpetrators of this heinous terrorist attack.   A total of six individuals were charged, tried, and convicted in Bangladesh.  Two of the convicted conspirators, Syed Ziaul Haque (aka Major Zia) and Akram Hussain were tried in absentia and remain at large.

Two related groups have claimed responsibility.  Ansarullah Bangla Team, an al-Qa’ida-inspired terrorist group based in Bangladesh, claimed responsibility for the attack.  Shortly thereafter, Asim Umar, the now-deceased leader of al-Qa’ida in the Indian Subcontinent (AQIS), posted a widely circulated video claiming that AQIS followers were responsible for the attack on Roy and Ahmed.

It is extremely unfortunate that within weeks of this reward announcement of the US State Department, an unjust sanction was imposed on Rapid Action Battalion and several officers of this organization.

We know by now, pro-Islamist Bangladesh Nationalist Party (BNP), pro-sharia Jamaat-e-Islami and other agents of radical Islamic militancy had spent millions of dollars towards lobbyists and “connections” in totally misleading the members of the US Congress and Senate as well as officials in the Department of Treasury, Department of Justice and State Department and finally succeeded in getting this unfortunate sanction. Meanwhile, the same vested interest group have influenced several rights groups, including scandalous Amnesty International in approaching the United Nations with the notorious demand for barring members of Bangladesh Armed Forces, Bangladesh Police and other law enforcement agencies from participating in the United Nations Peacekeeping Forces.

I am confident, Bangladesh government as well as our missions in Washington DC and New York are working in countering the false and fabricated propaganda of the vested interest groups against Rapid Action Battalion and other law enforcement agencies in Bangladesh. I would like to humbly appeal my friends in the US Congress and Senate to take necessary steps in immediately lifting the unjust sanctions. From my part, I am ready to provide any required information that my friends in the Capitol Hill may require for the purpose of doing needful for getting the unfortunate sanction lifted as soon as possible.

Relations between Bangladesh and the United States is time-tested and extremely cordial. The US is one of Bangladesh’s best development partners. We also are working in unison to combat religious extremism, terrorism and radical Islamic militancy. I would like to firmly say, should there be no RAB in Bangladesh, this country would have long gone into the grips of terrorists, radical Islamic militants and narco-mafias. For the sake of security of Bangladesh and South Asia, Rapid Action Battalion is an essential force. Hope my American friends will please understand this fact.