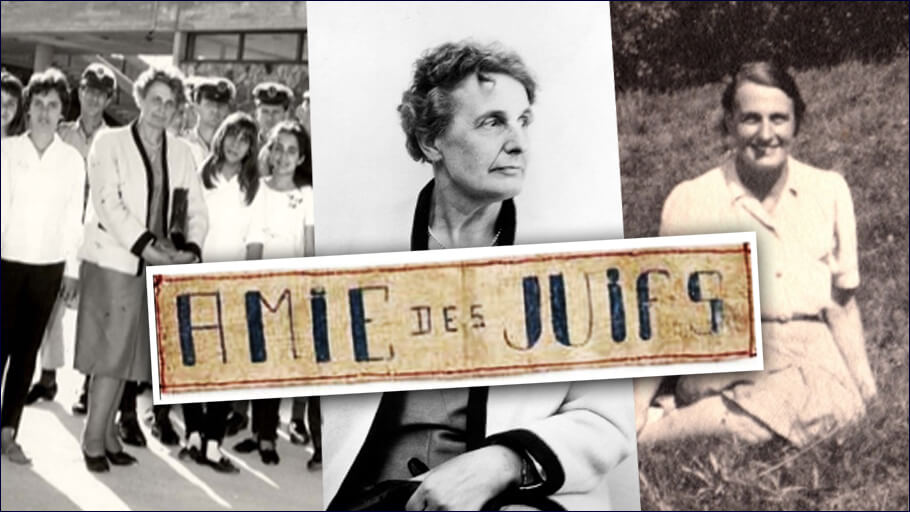 Dr. Adélaïde Hautval was a psychiatrist who lived in a Vichy-controlled area of southern France. In April 1942, Hautval was told of the death of her mother who had lived in occupied Paris. In order to attend the funeral, she applied for a pass to cross the demarcation line.

Although her request was rejected, Adelaide attempted to cross over. She was arrested and taken to the Bourges train station for an identity check. While waiting on the platform, she noticed some Germans mistreating a Jewish family. Speaking calmly to them in German, she told them to leave the family alone.

“Don’t you see that they are only Jews?” asked the German.

“So what? They are people like the others, leave them alone,” Adelaide bravely insisted. Her answer landed her in the Bourges prison where she would witness further cruelty towards Jews.

“A Jewish woman was placed in our cell and I discovered that she was wearing a yellow star sewn on her jacket. To attract the attention of the Gestapo, I attached a piece of paper to my clothing,” Adelaide explained. It stated, “Friend of the Jews.” Whenever she could, she boldly defended her friends.

When Adelaide was being interrogated, the Germans offered her a compromise: “Deny what you said about the Jews and you will be released.”

“But how can I say something else? Jews are like other people,” Adelaide insisted.

”So you defend them? You will share their fate!” the Germans harshly informed her. Because of Hautval’s refusal to change her attitudes, the Gestapo compelled her to stitch a Star of David on her coat along with a cloth band marked “A friend of the Jews.”

Dr. Hautval was sent to the Birkenau death camp together with other French prisoners. A devout Protestant and daughter of a pastor, she was housed with 500 Jewish women who called her “the saint.” Utilizing her medical knowledge to treat Jewish prisoners suffering from typhus, she secluded them in a separate part of the camp to prevent contagion. By not reporting the prisoners’ illness, she saved them from the gas chambers. Treating Jewish patients with total dedication, her acts of kindness were rare in this hell on earth.

She told them, “Here, we are all under sentence of death. Let us behave like human beings as long as we are alive.”

In April 1943, Adelaide was sent to Block 10 of the main camp of Auschwitz where sadistic experiments took place, including the sterilization of women by injection of caustic products. She was supposed to assist with the “medical experiments” performed on Jewish women prisoners without anesthetic by German doctors. With great courage, she defied the criminal experimenters, refusing to enter the operating room or to assist the surgeons. Sent back to Birkenau, she wondered what had saved her from execution since the SS was known for its brutality.

When she finally discovered that an order had in fact been given for her execution, she was tormented by the idea that another inmate might have been substituted for her.

Back in Birkenau, she continued to treat typhus patients, saving them from the gas chambers. Then in November 1943, Adelaide herself caught typhus. She became very ill and was unable to resume work for several months.

In August, 1944, she was transferred to Ravensbrück and later sent as a doctor to the Watenstett camp, an ammunition factory.

After the liberation of Ravensbrück in April, 1945, she continued to treat the patients who were too ill to be moved.

Adelaide was repatriated only in June, 1945, with the last French patients. Because she was not part of a resistance organization or network, she had difficulty obtaining a resistance deportee card.

After the war, although her health was impaired by her bout with typhus and malnutrition, Adelaide resumed her medical practice in France. She was awarded the Legion of Honor in December 1945 for her dedication to her fellow inmates in the brutality of the concentration camps. In 1946 she wrote a short book called Medicine and Crime Against Humanity, which was finally published 44 years later.

Then in May 1964, a libel suit was filed in London against American novelist Leon Uris by Dr. Vladislav Dering, a Polish gynecologist then living in Britain. He accused the author of Exodus of defamation. Leon Uris claimed that the doctor had participated in block 10 in criminal experiments with Jewish prisoners.

Dr. Adelaide Hautval was called as a witness. On the witness stand, she declared: “Yes, Dr. Dering did experiments on at least 400 Jews.”

Asked questions from the defense, Adelaide explained how she reacted during her incarceration in Block 10:

“I had to serve as an assistant to Dr. Wirths, a German with gray-blue eyes. He told me that I would also have to assist Professor Clauberg, a civilian, bald little man, wearing a Tyrolean hat and boots. I was troubled because that is something I did not want to participate in. Having probably noticed my reluctance, he questioned me about my opinion of sterilization. The opportunity was unique. I think a direct question deserves a direct answer. I said, ‘I am absolutely opposed to it.’”

“’Do not you see that these people (the Jews) are very different from you?’ I was asked again. ’I do not and don’t stop me from saying that in this camp many people are different from me.’”

Following this testimony, one of the English judges proclaimed, “Here is one the most impressive, brave women who has ever appeared before a court in this country, a woman of strong character and an extraordinary personality.”

In 1965, Dr. Adelaide Hautval was awarded the title of Righteous of the Nations by Yad Vashem and traveled to Israel to receive her medal. Her positive attitude towards the Jewish people remained as strong as ever:

“The return of the people of Israel to their own country is an accomplishment concerning not only itself but the world at large…. Israel has always played a gestative, fermentative role, due to which it was hated or respected. Its mission in the world continues. May Israel remain faithful to it. The entire history of the Jewish people demonstrates the primacy of spiritual forces. Hence, its undertaking cannot but be successful,” she stated.

In October, 1988, after discovering the signs of Parkinson’s disease, Dr. Hautval sadly chose to end her life. The hospital where she worked was renamed Adelaide Hautval Villiers-le-Bel in her honor.

Like Loading...
Recommended for you:
Continue Reading
Advertisement
You may also like...
Related Topics:A friend of the Jews, Bourges train station, Don’t you see that they are only Jews?