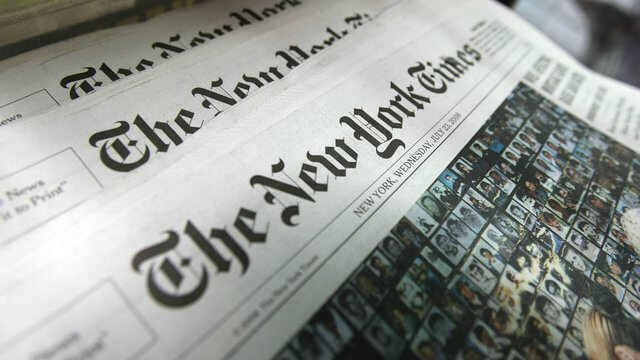 And still, the New York Times never ceases to amaze me. Frighten me too, because so many thought leaders continue to swear by the Gray Lady.

Just yesterday, they presented two full pages of faces, mid-term candidates all; they are visually categorized in terms of gender, race, and sexual preference, but not in terms of issues. Identity Balkanization at its finest. A new kind of Tribalism.

Also that same day, the Times covered the perpetrator who tried to torch six Jewish schools and who wrote “Die, Jew Rats,” “Hitler,” “End It Now” and “Jew Better Be Ready,” and who also scrawled a swastika on the walls of the Union Temple of Brooklyn.

Dare we feel anger or fear, the headline steers us towards compassion. It reads: “Man Accused of Anti-Semitic Vandalism Faces New Setback in a Life Full of Them.”

In other words, the perpetrator is a victim, a victim of the foster care system and of a bipolar disorder. He is also a man who self-identified as “queer.”

Despite having been eventually fostered by a Jewish couple, given a scholarship to Brandeis, chosen as an intern by former City Council Speaker, Christine Quinn, who met him at a gay pride rally for Obama, and with whom he worked for a decade—despite all this, Polite still struggled with marijuana use and, like so many similarly afflicted others, did not always take his psychiatric medication.

Delicately, reverentially, the article does not put into words the fact that the perpetrator, James Polite, is also an African-American. We only know this from his photo and from the police surveillance image which was published in the New York Post.

One must ask why. Is that too sacred a descriptor or, might it be seen as “racist” to attribute these acts of Jew-hatred to an African-American? Is naming Polite’s race more offensive than what he did? Or, is it that he is not running for public office (see paragraph two above) and thus, the reality of his race must be handled very, very, carefully?

Polite’s profile does not fit the preferred profile of a mass murderer in America who is supposed to be and often is an angry white man or boy. But this is not always true.

This same article does not say a word about how Polite’s arson and graffiti affected the yeshiva students or the synagogue members. Previously, before the perpetrator was caught, and in the shadow of the massacre of Jews in Pittsburgh, the New York Times did report on Ilana Glazer’s decision to cancel a political event at the synagogue due to the graffiti. This cancellation is also mentioned here but only in passing, and not in a way that is meant to upset or anger us.

Based on this coverage, we are meant to pity and “understand” Polite, and to hope that the system will continue to give him second third, and fourth chances. He is portrayed as a lost, but sympathetic man, whose life has been unbearably hard. We are not meant to focus on the ideology of ethnic bigotry towards the Jewish People on both the right and the left in America, an ideology which is beyond pandemic in the Islamic world, an ideology that might have unleashed this lost but dangerous soul.

Oddly enough, right above this story, is one about the massacre of two women by a misogynist “Incel,” Scott P. Beierle, in Florida. We do not learn anything about this perpetrator’s hard luck life or about his possible psychiatric ailments. Clearly, something—many things must be wrong with him since he, like so many other mass shooters, could not connect with others. However, we only learn about what he did, exactly what he said, about his hatred of women, about the fact that he was also a racist. The article begins this way: “In online videos, he spewed misogynistic and racial vitriol—and railed against all the women who had turned him down.”

We are meant to hate and despise such a perpetrator.

Such double standards and such biased coverage is similar to how the mainstream media, beginning with the New York Times, covers terrorist attacks committed by Muslims. They are invariably seen as mentally ill or as lone wolves, not as Jihadists, not as soldiers in civilian clothing whom an ideology of hatred towards infidels has both indoctrinated and sent on their deranged missions of hate.

We must understand that Jew hatred, (as expressed today in pograms, genocides, mass bombings, shootings, stabbings, rocket attacks, and as expressed historically in grievous taxation and exile ), is not a function of economic or national frustration or envy of superior competence during troubled times. (This concept has also just been launched in an op-ed piece in the Times).

In the past, Christians murdered Jews. Today, Muslims are murdering Christians as well.  Heartbreakingly, in Pakistan, violent mobs are calling for the death of Assia Bibi who has just been released from eight years in jail and who needs to be airlifted, together with her family, right out of that hell-hole. Her crime? Allegedly drinking water from a well that Muslims use. This was considered blasphemy.

Today, Arab Muslim terrorists who attack Jews in Israel are doing what Muslim leaders have taught their people to do to infidels: Kill them. Death and Murder are viewed as more valorous than Life.

This Oldest Hatred is not caused by anything Jews have done but is, rather, a crime of essence. We must understand this if we are to strategize effective means of self-defense and the prevention of atrocities. Even those, perhaps especially those, who are committed to the long term education of haters must start by acknowledging this.