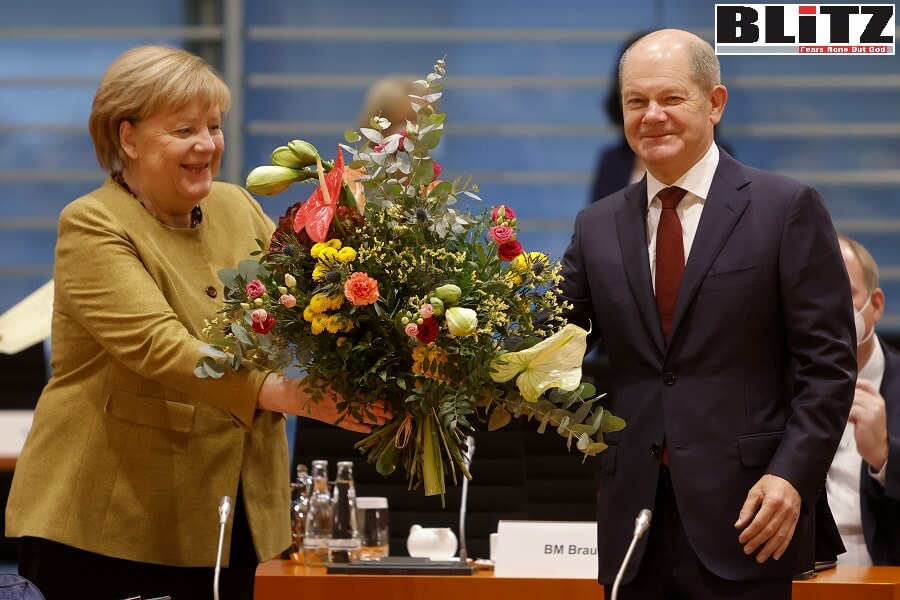 How will the advent of a center-Left government in Germany affect Britain, Europe and the world? Yesterday Olaf Scholz (second from left), the new Chancellor-elect, presented his ministerial team, which includes the Green co-leaders Annalena Baerbock (middle) as Foreign Minister and Robert Habeck (third from right) as Minister for the Economy and Climate Change. He also announced a program of liberal reform, with the motto “Dare more progress”. The “traffic light” coalition will now seek approval from members for the deal struck between its three constituent parties, before taking office in just over a fortnight. After 16 years of Angela Merkel, a new era in German politics is dawning.

In British terms, Scholz is more of a Gordon Brown than a Tony Blair. He has been a reliable Finance Minister, who has guided the Federal Republic’s through the pandemic with his reputation intact. Even so, his successor in that role, Christian Lindner (above, far left), will have his work cut out to allay German angst about rising inflation, now at 6 per cent — higher than at any time since the 1970s. It is a shrewd move by the new Chancellor to make the leader of the most Right-leaning party in the coalition responsible for the nation’s finances. He will resist moves to raise taxes or lose control of public spending — but radicals will blame Lindner rather than Scholz.

Germany, then, will continue to be a powerful force for economic stability and orthodoxy in the concert of Europe — with one exception. On climate change, the new coalition has agreed to spend unprecedented sums to speed up the transition to a net zero economy. Coal will be phased out by 2030, much sooner than had been envisaged, and the sale of new petrol or diesel vehicles will be banned soon afterwards. Germany, which once pioneered environmental politics but in recent years has fallen behind on carbon emissions, will now redouble its efforts to lead Europe towards a green utopia.

However, there is a worm in the apple. Mrs Merkel’s fatal decision to abandon nuclear power after the Fukushima disaster means that in the short to medium term, in the absence of sufficient renewable energy supplies to replace fossil fuels, Europe’s largest economy will be even more dependent on Russian gas. Approval by regulators of the crucial Nord Stream 2 pipeline has been suspended, but Vladimir Putin is pressing hard to start pumping. It is hard to see how Scholz can resist that pressure, despite warnings from Joe Biden and other Western leaders that it will enable Russia to bypass Ukraine and Belarus, rendering both more vulnerable to Putin’s aggression.

Yesterday’s press conference offered few clues to the foreign policy of the Scholz Government. The new Chancellor said merely that it would focus on “our friendship with France, our partnership with the US and standing up for peace and prosperity in the world”. Notable by its absence was Britain, still blamed for Brexit, which has raised the burden on Germany to pay for the EU. Scholz can safely praise his French and American allies as long as they are led by liberal Presidents Macron and Biden. What, though, if they were to be defeated in elections as soon as next year? With a Right-winger in the Élysée and a lame duck in the White House, Scholz would need other allies to pursue his progressive agenda while maintaining “peace and prosperity”. He would be wise to pick up the phone to London sooner rather than later.

Brexit or no Brexit, the Anglo-German relationship remains a crucial one for Europe. Our two countries showed during the pandemic that they are in a different league from the rest when it comes to medical innovation, developing new vaccines and treatments on a par with the US. But Germany still relies on the UK’s hard as well as its soft power. While the French still flirt with the idea of leaving Nato, most Germans know how exposed they would be without an alliance in which the British still do a lot of the heavy lifting. It is no accident that when Poland needed help to secure its eastern borders recently, it turned to the Royal Engineers — not the Bundeswehr.

Like his Social Democratic predecessor during the Cold War, Helmut Schmidt, Olaf Scholz is a natural Anglophile, born and raised in Hamburg. Like another great Chancellor of that era, Willy Brandt, he hopes to offer strong moral leadership. He too must never forget that attitudes to Germany across Europe are still freighted with the Nazi past. Half a century ago, Brandt’s famous Kniefall (“falling to his knees”) at the memorial to the Warsaw Ghetto Uprising set a standard for German statesmanship, simultaneously demonstrating courage and humility, that the new Chancellor would do well to emulate. In standing up for peace, Scholz will have to defy those who threaten it, from Moscow to Beijing. That means hugging his key allies close.

For most of history, the North Sea has been a unifying rather than a dividing factor: Hamburg’s prosperity was built on trade with London. The British and Germans have more in common than either does with any other European nation. If Scholz sees France as a friend and the US as a partner, he should see the UK as both. Indeed, we are more like brothers or sisters — with the usual sibling rivalries. Boris Johnson should make a serious effort to put those rivalries behind us — no Tommy and Jerry jokes, please — and embrace his new counterpart in Berlin. They might both surprise themselves.

Republished from The Article