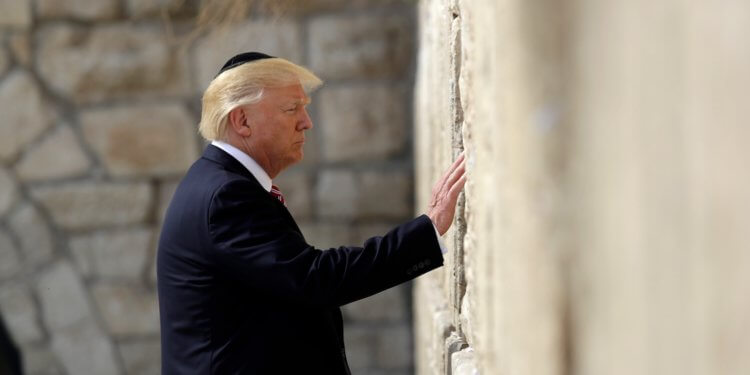 Ben Caspit in Al-Monitor has leaked details of the Trump administration’s “ultimate deal” to resolve the Palestinian-Israeli conflict. Citing an anonymous “senior diplomatic source,” he writes that the still-secret Trump plan

includes a clear partition of Jerusalem into three sections, and “it is not about a Palestinian capital in Abu-Dis (a Palestinian village in the Jerusalem governance area) but in significant sections of East Jerusalem.” According to the source, there will be two capitals in Jerusalem: the Israeli capital in West Jerusalem including control over the Western Wall and Jewish neighborhoods in the city’s eastern sections, and the capital of Palestine in the eastern section. In addition will be a third region, within the Holy Basin, to be under international control.

Well, “interesting if true” should be one’s first response, as prior leaks that have proved to be inaccurate. But let’s suppose that this anonymous senior diplomatic source knows of what he speaks. Then what?

– Any area “under international control” idea curiously harks back to the 1947 United Nations Partition Plan for Palestine’s ill-fated but enduring notion of Jerusalem as a Corpus separatum. In other words, it’s anachronistic.

– The idea is also wildly dangerous: imagine placing one of the world’s most sensitive locations under the control of the U.N. General Assembly or the Quartet on the Middle East. Its inevitable mischief could well set off the next round of fighting.

– The Trump plan wrestles away sovereign areas of Israel and hands them to the Palestinians.

– Doing so rewards the Palestinians despite their fulfilling basically none of their prior commitments dating back to the Oslo Accords of 1993. In other words, it encourages further Palestinian bad behavior.

– Of course, making eastern Jerusalem into “the capital of Palestine” implies the U.S. government recognizes the state of “Palestine.” Trump’s remarks over the past year likely imply he will demand the Government of Israel recognize it too, setting off a huge debate in Israel.

– Presumably, that “Palestine” will include parts of Jerusalem, most of the West Bank, and all of Gaza. Where the borders should run in the first two areas will drive one massive argument. A second will follow when the Palestinians inevitably decide, actually, that “Palestine” includes all of Israel too.

– As Caspit points out, a proposal to divide Israel into three will roil Israeli politics and harm Netanyahu, who no longer can satisfy both his nationalist base and the U.S. president.

– As in other cases where Donald Trump follows his instincts against the Republican consensus (imposing tariffs, pulling troops from Syria), the left-wing of the Democratic party will (very faintly) applaud. This time, so will the European Union.

– In contrast, many of Trump’s Israeli and Zionist admirers, including Evangelicals, will be rudely shocked by his proposal and lash out. Given prior patterns (again, tariffs and Syria), one can confidently predict what happens next: Trump responds angrily and doubles down, vaporizing the U.S.-Israel honeymoon of the past two years. Trump supporters will bitterly divide over this issue, further weakening the conservative movement and diminishing Trump’s chances at re-election.

In brief, if Caspit is correct about Trump proposing to divide Jerusalem into three, the consequences will be major and long lasting.