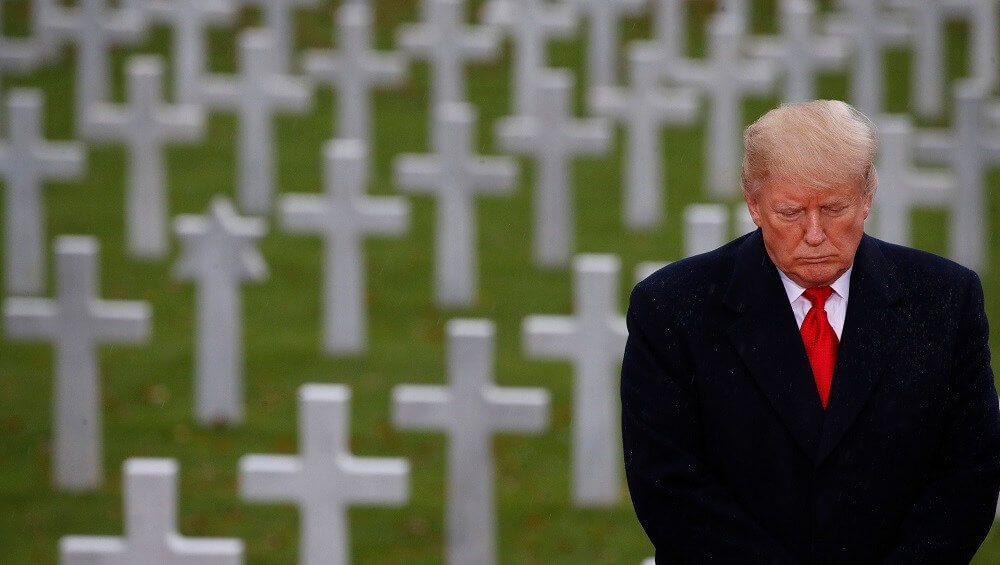 U.S. President Donald Trump got just about the welcome he should have expected when he showed up to take part in the commemorations of the centennial of the end of World War I this past weekend. The international media excoriated him for skipping one of the memorial services due to bad weather (he attended another such service the following day, despite the rain) and then was subjected to a stern lecture by host French President Emmanuel Macron during another one of the ceremonies.

Trump is being portrayed as not the equal of the high-minded leaders of France and Germany, whose current close relations underscore the importance of learning the lessons of history. But while the president seemed out of step with the spirit of the 1918 centennial, on the key challenge currently facing the international community, it is his European critics who are ignoring history and acting selfishly.

There was little doubt who or what Macron was talking about when he spoke of the dangers of “nationalism,” drawing a stark contrast between those who view themselves “nationalists” and those who view themselves “patriots.” Speaking at the Arc de Triomphe, Macron told the assembled leaders of Europe: “Patriotism is the exact opposite of nationalism. Nationalism is a betrayal of patriotism by saying: ‘Our interest first. Who cares about the others?’ ”

While Macron’s distinction between nationalism and patriotism is sheer sophistry, it was a message that went over very well for those who fear for the future. His critics think Trump’s “America First” foreign policy and lack of enthusiasm for the NATO alliance, as well as his much publicized interest in better relations with Russia, are tearing apart the post-World War II order that has kept the peace in Europe. Trump’s critics—Macron and German Chancellor Angela Merkel being the most prominent of them—believe that his emphasis on nationalism is encouraging right-wing governments in Eastern Europe to follow his lead and think less about what’s good for the continent as a whole and more on what’s in it for them.

Set in the context of the effort to recall how unbridled nationalism helped set in motion the catastrophe of the war that tore Europe apart from 1914 to 1918, it sounds like a searing indictment of the president. In that way, Trump’s own condemnation of those who value globalism or pay little attention to the impact of the global economy on local interests is viewed as not merely a narrow and chauvinistic approach to the world, but also a willingness to ignore threats to democracy that can only be met by collective action. Indeed, the whole point of NATO was to ensure that a third European war would not follow after the defeat of Nazi Germany in 1945, as well as to defend small nations against the predatory ambitions of the Soviet Union and its reboot under Russian President Vladimir Putin.

But Russia isn’t the only threat the West faces, and that’s why the Franco-German lovefest at Trump’s expense isn’t quite as principled as the president’s critics claim it to be.

Leaving aside the natural resentment many in Europe feel about the high-handed and undemocratic way that the European Union thwarts the efforts of individual nations to decide their own fates, Macron’s sermon is actually deeply hypocritical. Far from exemplifying the principle that the West must think about what is good for all, France and Germany are actually doing the opposite when it comes to Iran.

Trump’s decision to withdraw from the 2015 Iran nuclear deal horrified Macron and Merkel. They are particularly angry about America’s re-imposition of sanctions on the Tehran regime and the Trump administration’s efforts to force the Europeans to go along with his decision. The Europeans see this as the worst example of policies that undermine the Western alliance.

But in fact it’s the Europeans who are behaving selfishly.

Trump understands that the Iran deal must be renegotiated because the pact hat President Barack Obama proclaimed as solving the nuclear threat is fatally flawed. The deal not only enriched and empowered the world’s leading state sponsor of terror, but its sunset clause ensures that Iran will eventually get a bomb anyway.

Rather than joining with him to act to correct this problem and restrain Iranian adventurism—including a mass slaughter in Syria, a bloody war in Yemen, and a standing threat to the security of Sunni Arab nations and Israel—the Europeans prefer to keep doing business with Tehran.

And rather than submit to American leadership on an issue that threatens not merely the Middle East but a European continent that would be in range of Iranian missiles, Macron and Merkel have been exploring options that would allow them to separate entirely from the U.S. economy. They are bluffing about that. But their insistence on vetoing any Western stand against Iran is a dangerous form of appeasement that gives the lie to their claims of learning the lessons of history.

Europe’s wars were caused by the indifference of democracies of the need to stop aggressors before they posed a mortal threat to the world. The greatest tragedies of the 20th century happened because the appeasers—and those who just wanted to make a profit by dealing with rogue regimes—had their way until it was too late to avert catastrophe.

Trump may not be much of a student of history, but he appears to know that much. That’s why he’s right about Iran, and why Macron and Merkel are wrong. All the lectures about nationalism won’t change the fact that on Iran, it is they who are acting in their nation’s selfish interest and Trump who is speaking for the good of the international community. One hundred years after the end of the Great War, that’s a history lesson that can’t be erased by the applause France and German are getting from Trump’s critics.