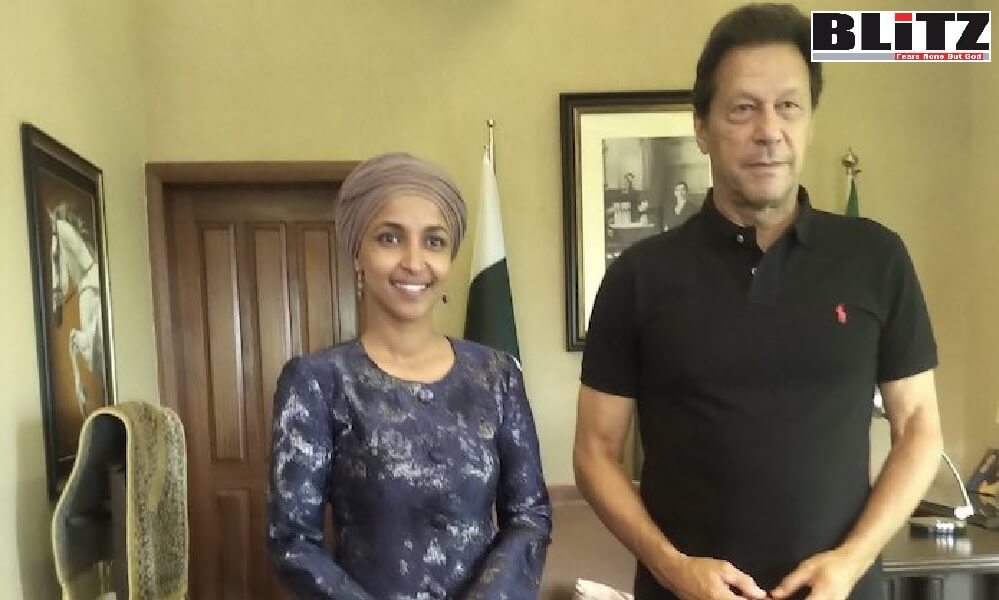 When Ilhan Omar runs again for office this November, one hopes that her opposition to sanctions on Russia will be made much of by her opponents. Writes Hugh Fitzgerald

While the entire Western world is reeling at the spectacle of Russian atrocities in the Ukraine – the razed-to-the-ground cities, the mass graves full of murdered Ukrainians, the deliberate targeting of civilians with missiles let loose at railroad stations, schools, hospitals, theatres — Ilhan Omar has demonstrated her fealty to Vladimir Putin. She was one of only two House Democrats to vote against sanctioning Russia’s oil industry, while her fellow Muslim member of the Squad, the Palestinian-American Rashida Tlaib (D-Mich.), in the run-up to the invasion argued against providing Ukraine with aid.

Omar has family ties, of an unusual sort, to Russia. Her brother-in-law, Mohamed Keynan, was the chief of staff for former Somalian Prime Minister Hassan Khaire, known for “all but giving” his country’s oil reserves to the energy company Soma Oil & Gas, which is controlled by a Russian oligarch and Putin ally Alexander Djaparidze. Omar’s father was a Soviet-educated colonel in the Somali army during the ’80s under the Russian-backed regime of Siad Barre.

Omar and Tlaib are the two most anti-Israel, pro-Palestinian members of Congress. As such, their defense of Russia is unsurprising. The Palestinians themselves have been among the very few supporters of Russia internationally. PA President Mahmoud Abbas had a warm telephone call with Putin on April 18, in which he declared his firm support for Russia, and Putin, in turn, declared his support for the Palestinians. Hamas, too, has just thanked Putin for his “principled stand” against Israel. In the middle of the Ukrainian conflict, when Putin has been shunned by the civilized world for his war crimes, “Palestine” – both the PA in the West Bank and Hamas in Gaza — stood with Putin. Don’t let that be forgotten.

What was Ilhan Omar’s excuse for her pro-Putin votes? “I don’t support broad-based sanctions on any country. They are economic warfare, and we should all oppose them like we oppose military actions. Also, as humans who are interconnected to other humans globally, we will directly or indirectly be impacted by it,” Omar tweeted.

Let’s rub our eyes in disbelief and read that again:

Her excuse for her pro-Putin votes? “I don’t support broad-based sanctions on any country. They are economic warfare, and we should all oppose them like we oppose military actions. Also, as humans who are interconnected to other humans globally, we will directly or indirectly be impacted by it,” Omar tweeted.

But what about Israel? What about BDS? Of course, Omar loves to sanction Israel.She, Tlaib and the rest of the Squad – Alexandria Ocasio-Cortez, Ayanna Presley, new Squad member Cori Bush — champion the Boycott, Divestment and Sanction movement that targets the Jewish state, never worrying about the impact of sanctions on Palestinians as well as on innocent Israelis.

When Ilhan Omar runs again for office this November, one hopes that her opposition to sanctions on Russia will be made much of by her opponents. Putin has become the most hated political leader in the world; Ilhan Omar has been his most loyal defender in Congress.

And Ilhan Omar has now been promoting her very own foreign policy even farther afield. She’s been visiting Pakistan, meeting with a host of officials in the new government that took office in mid-April, to show her support for Pakistan’s possession of part of Kashmir that rightly belongs to India. A report on her trip to Pakistan is here: “India slams Rep. Ilhan Omar over ‘condemnable’ visit to Pakistan,” by Callie Patteson, New York Post, April 21, 2022:

Earlier Thursday, Omar had visited the Pakistan side of a cease-fire line in the region, known as the Line of Control, and told reporters that her fellow lawmakers should pay more attention to the long-running conflict.

“I don’t believe that it is being talked about to the extent it needs to be in Congress and within the administration,” the far-left “Squad” member said, according to Reuters.

Omar then added that the House Foreign Relations Committee, on which she sits, would look into allegations of human rights violations by Indian authorities in the region….

Will the House Foreign Relations Committee also look into the “alleged human rights violations” by Pakistani authorities, who have failed to adequately protect their Christian and Hindu minorities? Will Ilhan Omar urge the Committee to discuss the misuse of the “blasphemy” charge in Pakistan to terrorize innocent Christians such as Asia Bibi, who was sentenced to death — though later acquitted after serving seven years in solitary confinement — on a false charge of blasphemy brought by Muslim women with whom she was feuding? Will Ilhan Omar allow testimony before Congress about the Muslim terrorists, members of the Pakistani terror group Lashkar-e-Toiba, who over the course of four days in 2008 struck 12 targets across Mumbai, ranging from the central train station to a Chabad Center? In Pakistan the terrorists had freely plotted their attacks. Many terrorism experts in the West believe that the terrorists received assistance from the Inter-Services Intelligence (ISI), Pakistan’s leading intelligence organization, the equivalent of our CIA. The Lashkar-e-Toiba group operates openly in Pakistan, and has the support of many in the government. Surely the House Foreign Relations Committee — all of its members save one — would like to find out and make public more about the Pakistani government’s history of support for terrorism.

Even less known are the many attacks on Hindu holy sites in Pakistan that go completely unreported in the West. How many of us have even heard about the December 30, 2020 attack on the major Hindu temple, situated in the Karak District of Khyber Pakhtunkhwa province of Pakistan, which was attacked and burned, by a mob of 1,500 Muslims, led by a local Islamic cleric? How many know about the continuing destruction of Hindu temples in Pakistan, or about the murderous attacks by Muslims in both Pakistan and Bangladesh on their Hindu neighbors? This persecution has had the desired effect. In 1947, before Partition, Hindus made up 20% of the population of what was then West Pakistan; now they are 1% of the population. And in 1947 Hindus were 35% of the population in East Pakistan – today’s Bangladesh – and today have fallen to 6%. Surely those decreases in population are the clearest evidence of the mistreatment of Hindus in both Pakistan and Bangladesh.

Yes, the members of Congress should pay more attention to “human rights violations” in Kashmir, but not in the way Ilhan Omar has in mind. They should not only find out about the murders and mass expulsions of Hindus by Muslims in the Pakistan-ruled part of Kashmir, but also the flight of Hindus even from the Indian-ruled part of Kashmir, where Muslims in the past have not hesitated to murder Hindus. Between 1990 and 2011, Muslims managed to drive out nearly all of the 140,000 Hindus in Indian-held Kashmir, so that only 3,000 Hindu families remained. Since 2011, the Indian government, led by Prime Minister Modi, has moved more of its military into Indian-held Kashmir, and is encouraging Hindus to return, especially to the Kashmir Valley, where they will now be protected by the Indian Army. It would be most enlightening to have Ilhan Omar’s very own House Committee on Foreign Relations hold hearings with Hindu witnesses, who can describe what they know about, or perhaps themselves have suffered, the atrocities committed by Muslims in Jammu and Kashmir. Ilhan Omar will try to ensure such testimonies are never heard; her colleagues should make sure that she doesn’t get her way.

Rep. Ilhan Omar’s visit to Pakistan is the first by a member of Congress since a new coalition government came into power in Islamabad last week.

Foreign Minister Hina Rabbani Khar…touted the meeting with the congresswoman, saying Omar promised to “cement” ties between the two countries and saying they have “benefited” from working together in the past.

One would like to know more about that Pakistani claim to have been “working together” with Ilhan Omar in the past. On what exactly? Did Ilhan Omar really promise she would “cement” ties between the U.S. and Pakistan, which harbors such terrorist groups as Lashkar-e-Toiba, Lashkar-e-Jhangvi, and Sipah-e-Sahaba? Does she intend to lobby — or will her husband’s consultancy do that for her — for more American money to Pakistan, or to push for more weapons being sent to the Pakistani army to be used against our ally India? Or has Ilhan Omar been of “benefit” to Islamabad by heading off investigations by the House Foreign Relations Committee of Pakistan’s real role in supporting Islamic terrorism and terrorists, from Osama Bin Laden, to the terror group Lashkar-e-Toiba, to Aafia Siddiqui, whose imprisonment in the U.S. led to widespread rage and demonstrations in Pakistan? At what point in her “working together” with Pakistan should Ilhan Omar have to register as a foreign agent?

Pakistan has been a false friend to Washington for decades. It provided the Taliban with training, weapons, and a secure base from which to attack its enemies, including the U.S. forces, in Afghanistan. Islamabad would later claim it was only supporting a “moderate” wing of the Taliban, but the distinction proved hollow, and the Taliban, who have now taken over Afghanistan – in part owing to Pakistan’s long-term support — have proved to be as fanatical as many feared.

Pakistan for many years provided succor, and a refuge, to Osama bin Laden. And after his assassination, the Pakistanis, furious at the American raid, arrested and sentenced to 33 years in jail Shakil Afridi, a doctor who had helped the Americans track down Bin Laden to his lair in Abbottabad.

It was also while receiving billions in American aid that Pakistan managed, with the nuclear secrets stolen from the West by Pakistani scientist A. Q. Khan, to produce nuclear weapons.

American aid money, it is horrifying to realize, paid for Pakistan’s nuclear program. And then Pakistan shared its nuclear knowledge with two of America’s most dangerous enemies, Iran and North Korea. Ilhan Omar is well-pleased with Pakistan despite — or possibly because — all this. She long ago revealed herself to be a willing collaborator with Islamic supremacists. In the contest between Islam and the West, she’s made clear which side she is on.