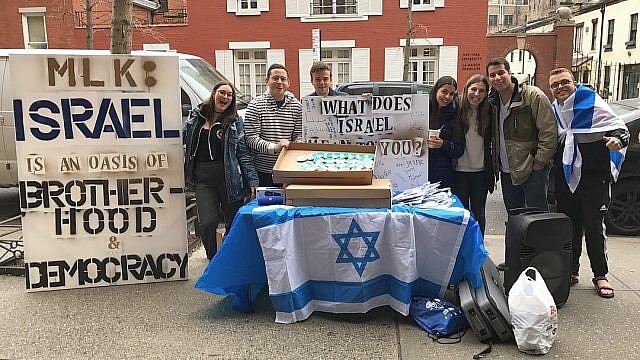 A teacher writing a letter of recommendation for a student is a commonplace event. Teachers refusing such requests may also be common, but when it happens, we assume it is because the student is asking for an endorsement they don’t deserve. But what are we to think about a refusal that is based in prejudice, rather than lack of merit?

That’s the upshot of a disturbing incident at the University of Michigan that was revealed this week.

John Cheney-Lippold, an associate professor working in Michigan’s Department of American Culture, had promised a student (who chose not to reveal her identity) that he would write a reference required for her to take part in a semester-abroad program in Israel. But a few weeks later, Cheney-Lippold wrote back to tell the student that he had changed his mind.

Rather than having misgivings about her qualifications or worthiness for the program, the professor said his refusal was about what he termed “politics.”

“I am very sorry but … as you may know, many university departments have pledged an academic boycott against Israel in support of Palestinians living in Palestine. This boycott includes writing letters of recommendation for students planning to study there. I should have let you know earlier, and for that I apologize. But for reasons of these politics, I must rescind my offer to write your letter. Let me know if you need me to write other letters for you, as I’d be happy.”

Is he within his rights to act in this manner?

While the student government at Michigan passed a pro-BDS resolution, the university’s board of regents rejected the measure with six of its eight members. After the student referred Cheney-Lippold’s communication to University president Mark Schlissel, he told The Algemeiner that the criteria used by the professor was wrong. “Teachers shouldn’t have a right to inject their personal viewpoints about this.”

Schlissel went on to say that BDS is “false” and “anti-Semitic,” and misrepresents Israel.

He’s right about that, but was Cheney-Lippold breaking the law?

According to BDS advocates, he was merely expressing his political opinion. He has a right to “support” “Palestinians living in Palestine” if that’s what he believes in, however amorphous that statement is defined.

But as with the debates about anti-BDS laws—one of which happened to have been passed in Michigan—the issue is not the professor’s right to hold an opinion about Israel. His refusal to write a letter that he had already agreed to give her was an act of bias.

Let’s be clear: The professor seems to be perfectly willing to endorse student visits to all sorts of nations governed by tyrants, including the Communists in China and Cuba, or the repressive regimes in Saudi Arabia or the Palestinian Authority in the West Bank.

He also seems to think that the one Jewish state on the planet is the only place that ought to be isolated in this fashion. Indeed, if he is a supporter of BDS, it’s likely that his line about “Palestine” is not merely a comment about the territories the Jewish state took in a defensive war in 1967, but a reference to pre-1967 Israel, which BDS advocates consider to be just as much an “occupied territory” as the West Bank.

Anti-BDS laws are legal because they ban commercial conduct—economic boycotts that attempt to discriminate against only the Jewish state and are therefore inherently anti-Semitic—that would be illegal in this country under any other circumstances.

But if you were wondering why a professor of American culture is doing seeking to prevent Americans from going to Israel, it’s actually not a coincidence. The American Studies Association (ASA) was one of the first such academic groups to vote to endorse BDS in 2013. That academics supposedly devoted to teaching about American values would support a program designed to eradicate the only Jewish state is bad enough. But it also happens to be illegal.

In passing the boycott resolution, the ASA violated the terms of its corporate charter, which just happened to be approved by Congress when it was founded, and the District of Columbia Non-Profit Corporation Act that requires an organization to operate only within the provisions of its charter. Promoting a campaign to stigmatize Israelis and to deny them access to U.S. institutions and vice versa is not only an act of despicable prejudice, but has nothing to do with the ASA’s purpose of promoting scholarship about American studies.

A number of ASA members have sued the leadership over this violation of its charter that, according to the plaintiffs, was accomplished by underhanded means that also violated the organization’s bylaws approved by Congress. While the litigation over this continues, JNS has asked the federal court presiding over the case to release materials related to this activity that the ASA has been forced to divulge during the discovery process. Among the materials that have already been revealed are documents that show the group has changed the rules governing its endowment that has allowed it to pilfer its funds to finance their defense against the suit, as well as public relations and lobbying activities. This might also be deemed illegal since that sort of political behavior is also prohibited to nonprofit groups like the ASA.

But, like the University of Michigan professor, the ASA leadership is a lot more interested in promoting anti-Semitic attacks on Israel—in this case, through the means of a student merely wanting to travel and learn—than in promoting the study of American history or culture. The perversion of a group that was founded to promote scholarship about America into one that aims at attacking Israel is a scandal.

That applies to both the ASA and Cheney-Lippold’s attempt to stop students from studying in Israel. That the academy has become a bastion of prejudice shows there is something very wrong about a certain sector of intellectual culture of this country. It’s up to the universities and the courts to demonstrate that responsible institutions won’t stand by while anti-Semitic discrimination is passed off as scholarship.

Like Loading...
Recommended for you:
Continue Reading
Advertisement
You may also like...
Related Topics:Brotherhood and democracy, Is he within his rights, This boycott includes writing letters