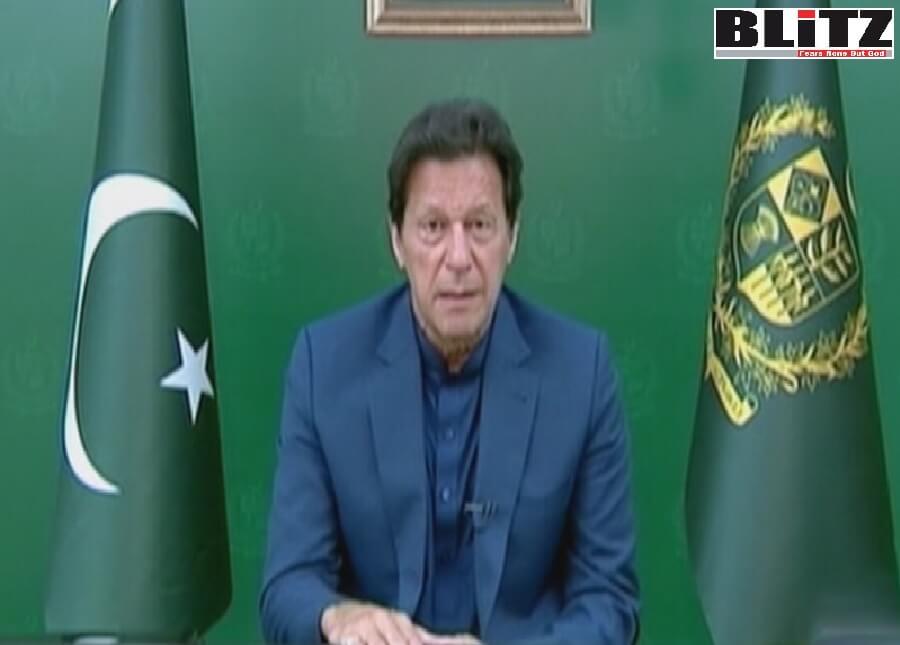 Pakistani Prime Minister Imran Ahmed Khan Niazi has convinced the United Nations to recognize Islamophobia, while he complacently allows jihadis to wreak havoc in his own country with absolute impunity every day. Hindus, Sikhs, and Christians live in Pakistan in uncertainty and under a cloud of terror, and Khan’s tenure as prime minister has not proved to hold any silver lining for them. Instead, their plight has only worsened. They continue to be demonized to the extent that Pakistani air has become practically unbreathable for religious minorities.

The former cricketer’s reputation as a Westernized sportsman and “playboy” initially deceived the world into believing he represented a liberal and a more contemporary vision for Pakistan. However, hailing bin Laden as a martyr, attributing rape to women’s attire, and blaming rape victims for their “inviting behavior” has exposed the Pakistan Tehreek-e-Insaf chief as the Muslim hardliner that he always was under his Western garb.

Now that the fate of Khan’s government seems uncertain and his days as prime minister appear to be numbered, it is worthwhile to consider the Islamist traits he has displayed while in office. Khan might have taken to Twitter to send Pakistan’s dwindling Hindu population his good wishes on Hindu festivals, but intolerance towards religious minorities, the abduction and forced conversion of Hindu girls, and mob violence against religious minorities ran unrestrained while he has been prime minister. Khan was more concerned with preaching to India about secularism and giving sermons about minority rights to France, all while Muslim mobs kept killing non-Muslims for alleged blasphemy.

When India introduced the Citizenship Amendment Act to relieve religious minorities in the neighboring Islamic countries, Khan strenuously objected, calling the measure anti-minority. It’s “anti-minority” to offer persecuted minorities refuge? Do Khan and other Muslims in Pakistan just want to keep tormenting non-Muslims for fun? Killing the “kaffir” is their religious right, after all — see Qur’an 2:191, 4:89, 9:5, and 47:4.

Pakistan is a signatory to the Universal Declaration of Human Rights that stresses the right to freedom of religion, but the Pakistani government with Imran Khan as prime minister has failed miserably to live up to international obligations. Reportedly, thirty-one non-Muslims were killed and over fifty-five injured in religious violence within the first two years of Khan’s administration. Add to this number over twenty-five cases of non-Muslims being targeted in blasphemy cases; even foreign nationals have not been spared. One can only take an educated guess as to the number of unreported cases that might have been shoved under the green rug.

With its focus on wrong priorities, the Pakistani administration has made no attempt to protect minority non-Muslim women from constant exploitation at the hands of Muslim men. Last week, a Muslim man, Wahid Bux Lashari, broke into a Hindu home with two of his associates and tried to abduct 18-year-old Pooja Kumari, whom he wanted to convert to Islam and marry. The girl resisted, which enraged Lashari and led him to shoot her dead.

Had this girl not been killed, she would have been abducted, tortured, and repeatedly raped until she gave in, recited the shahada, converted to Islam, married her abductor-cum-rapist, and publicly acknowledged that she had willingly converted and married the Muslim man. In most cases, these Muslim men are married and take the non-Muslim girls, who are generally much younger to they are, as their second or third wives. The 13-year-old Christian girl Arzoo Raja and the 14-year old Marya Shahbaz are quintessential examples of such deception.

The agenda is to annihilate religious minorities by taking their women by force, converting them to Islam, and producing Muslim babies from them, as the toothless government looks on. In the face of media and social media pressure, even if officials reluctantly arrest some men, the perpetrators are rarely sentenced to substantial penalties or punishments.

Khan is a fanboy of Turkey’s autocratic, anti-Semitic and sexist President Recep Tayyip Erdogan. So it is no surprise that he would want to emulate these traits as the prime minister of one of the most jihad-inclined Islamic countries.

Khan’s cabinet is made up of a set of Islamic dogmatists who do a poor job of hiding their jihadist sentiments. In a CNN interview, furthering a centuries-old anti-Semitic trope, Foreign Minister Shah Mehmood Qureshi claimed that Jews have “deep pockets” and “control the media.” Following up on Qureshi’s unwise remarks, Pakistani MP Maulana Chitrali called for a nuclear attack on Israel and the “liberation” of Palestine, while another minister, Ali Muhammad Khan, proposed that the Muslims should start planning for the world domination, like the Jews.

Imran Khan came into power riding high on the promise of building a Naya Pakistan (New Pakistan). Instead, the nation under his rule has been reshaped only by increasing jihad sentiment and activity, declining tolerance, the normalization of bigoted practices, and the rampant use of slurs for non-Muslims inside and outside its boundaries. The Khan government has propelled Pakistan’s irreversible descent into obscurantism and brazen bigotry. Like his predecessors, Khan will most likely be dethroned by the high-handed military of his country, leaving a legacy of blood behind. His “Naya Pakistan” will ultimately plummet into to a dark abyss.