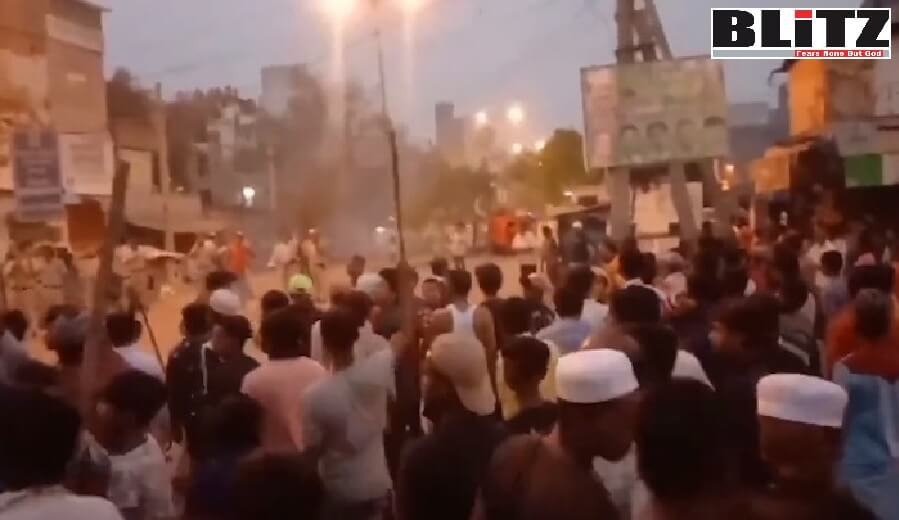 Hard on the heels of the gruesome attacks on Ram Navami, the Hanuman janmostav celebrations saw homicidal Muslims again attacking Hindus. Amid chants of “Allahu Akbar,” hundreds of skullcap-sporting men descended upon the streets, brandishing naked swords and started attacking Hindu processions with stones and liquor bottles. Vandalizing Hindu businesses and properties is always a part of the process.

This didn’t happen in some remote corner of the densely populated country, but in the capital city, right under the nose of the Home Ministry and in front of the police. “People started running, leaving their vehicles behind. I was trying to remove everyone from the violence-hit area; I was saving people when I was hit with stones,” stated Assistant Sub-Inspector of Police Arun Kumar. The unruly crowd hounded the police and wounded several cops and civilians. After being shot by the rioters, one inspector had to be rushed to the hospital. The National Commission for Protection of Child Rights has taken suo moto cognizance of the mob’s use of children to throw stones during the riot.

A local shopkeeper recounted how the agitators took down the national flag and hurled stones at an idol of the Hanuman. He held Rohingyas and Bangladeshi Muslims responsible for the anarchy in Delhi’s Jahangarapuri area. “They came here and broke our shop. We are fed up with them. These are the Bangladeshi Muslims,” he lamented.

On the other hand, a viral video allegedly of the riot-stricken area shows a Muslim woman questioning the Hindus taking processions down roads that pass by mosques. She almost justifies the attacks on the Hindus by her coreligionists, swearing that they will not tolerate the Hindus’ religious chants. Now mosques are rapidly mushrooming up on almost all the streets that lead to major Hindu temples. So how can a Hindu procession reach a temple without passing by a mosque?

While the bigoted Muslim woman demands that Hindus be banned from streets adjacent to mosques, it must be emphasized that thousands of Muslims occupy railway tracks, busy roads, and public spaces to hold their prayers, claiming this to be their fundamental right.

Similar incidents of violence and unrest have taken place in other Indian states. Over ten people, including police officials, were injured by frenzied Muslims who not only threw stones from their houses, but fired bullets at a Hindu procession passing through their neighborhood in Roorkee, Uttarakhand. They then vandalized several vehicles and burned two others. Superintendent of Police (SP) Rural Pramendra Global has given a statement confirming the incident, appealing to the Hindus not to retaliate against the violence initiated by the Muslims.

Stones were hurled at a Hanuman Jayanti procession organized by members of the Vishwa Hindu Parishad (VHP) in Holagunda, in Kurnool in Andhra Pradesh, also. Violence flared up when some Muslims who had gathered for iftar at a nearby mosque were angered by the “loud music” being played at the procession. This led to a clash in which 15 people were injured. Interestingly, mosques in every corner of India – there are over 300,000 active mosques in this country – declare through blaring loudspeakers that “There is no God but Allah” five times a day. But the music of an annually-held procession is too loud for them to tolerate.

Incidents of stone-throwing were reported from multiple areas in Hubli, Karnataka. Triggered by an alleged social media post (an edited image of the Indian flag atop a mosque), enraged Muslims gathered at the old Hubli police station and became violent. They threw stones, destroyed police vehicles, and assaulted a couple of police officers. Reportedly members of the All India Majlis-e-Ittehadul Muslimeen (AIMIM) and another Muslim group, Popular Front of India (PFI), had mobilized the mob to agitate against the police. Now multiple attempts of real and fatal attacks on Hindu temples by Muslims have occurred in recent months. However, not a single stone has been thrown in the direction of a Muslim man.

Even Mumbai, the financial capital of India, was not safe from Muslim attackers. At around 8 PM on April 17 in Mumbai’s Aarey Colony, Muslims attacked the Hindu Kalash Yatra near a temple in Goregaon. Video of the incident shows skullcap-wearing crowds charging at the Hindu devotees.

Many Muslims in India have decided that they will not let the Hindus celebrate their festivals. They have sworn to use violence to disrupt Hindu religious gatherings, injure the Hindus, kill a few, and cast a cloud of terror over the Hindu psyche. The Hindus, who have been on the receiving end of repeated planned Islamic attacks on every recent religious ceremony, will gradually concede to this fear. Hindu festivities will eventually dwindle from the Hindu homeland, marking the beginning of Gaza-e-Hind, the ultimate Islamic dream.