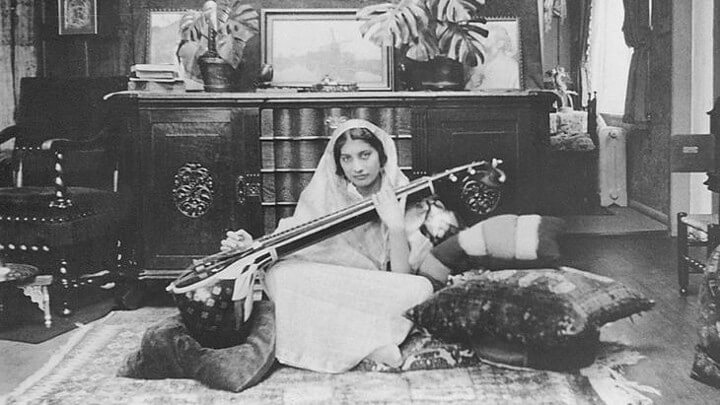 Editor’s note: In the world of insanity, where we are witnessing the alarming rise of antisemitism and anti-Israel bias, the story of Noor Inayat Khan, a descendent of Indian royalty grants us a fresh breeze. We particularly are delighted seeing one of our neighbors in India played heroic role in fighting the barbaric Nazis and finally sacrificed her life. As part of our editorial policy, we are encouraging our valued readers kindly to send us similar stories of heroes so that we can publish to inspire others.

Noor Inayat Khan, a descendent of Indian royalty, was a great heroine of World War II. Though her story is little known, she provided crucial aid to the Allied war effort and its fight against Nazi Germany.

Her great great grandfather was Tipu Sultan, Sultan of the Muslim kingdom Mysore in India who fiercely battled invading British forces and died in battle in 1799. Noor’s father Hazrat Inayat Kahan was a Muslim Sufi mystic and musician who married an American, Ora Ray Baker, and moved with her to Moscow, where they started a family. They eventually moved to Paris and enjoyed a cultured, artistic life. They lived in a house named “Fazil Manzil”, House of Blessings, on the outskirts of Paris.

Noor, their eldest daughter, studied music at the Paris Conservatory and child psychology at the Sorbonne and became a popular children’s book author. Her book, Twenty Jakata Tales, was published in 1939. After the fall of France in 1940, the Khan family fled, catching the last boat out of France to England. There, Noor and her brother Vilayat joined the war effort, signing up to fight with British forces.

Fighting wasn’t a natural choice for Noor. An avowed pacifist, she also bitterly opposed British rule of India. She was also extremely gentle and soft spoken. Noor’s friend Jean Overton later recalled: “Noor was the quietest person it was possible to imagine. Her voice was so slight and soft so as sometimes scarcely to be audible.” Yet faced with the barbarity of Nazism, Noor didn’t hesitate and joined Britain’s Women’s Auxiliary Air Force (WAAF).

As the war escalated, Britain’s Prime Minister Winston Churchill realized that the Allies needed more intelligence about what was happening behind Nazi lines. He ordered a top-secret project to “set Europe ablaze”: a team of crack radio operators who could penetrate behind enemy lines and broadcast secret reports back to Britain. This mission was almost impossibly difficult; radio operators would be working alone in Nazi occupied Europe, spying on authorities. They had to lug heavy radio equipment which made it difficult to disguise themselves and to move quickly. Spies had to find room to set up undetected bases and were in constant danger of giving their locations away with every broadcast they made. With almost all available men already in fighting units, many of those recruited for this classified project were women.

Noor Inayat Khan was one of the very first women to be recruited, and the first female radio operator to be sent into Nazi occupied France. She was trained by the Special Operations Executive (SOE) in covert warfare and spycraft. At first, some British officials questioned her suitability. But her fluent French, her knowledge of Paris, and her commitment to the Allied cause won them over. In June 1943 Noor was given the codename “Madeline” and parachuted into France behind enemy lines, tasked with meeting up with the resistance network in Paris codenamed “Prosper”. She knew that if captured, she faced torture and certain death.

Noor started working with her fellow spies, but disaster struck within a week. The spy ring was compromised and many radio operators were arrested. Noor’s handlers back in England told her to evacuate France immediately to save her life, but Noor chose to remain. She was now the only radio operator in the network – Britain’s sole radio contact in all of Paris.

Throughout the summer and autumn of 1943, Noor moved around France, taking her radio equipment with her, finding and setting up safe areas from which to broadcast. For four and a half months, she evaded capture and sent a regular series of coded broadcasts from Paris to London. It was later estimated that in those months, she performed the work it would normally have taken six operators to do.

In October 1943, Noor was betrayed to the Gestapo. It’s thought that she was turned in by Renee Garry, whose brother was Noor’s first contact in Paris. Noor was arrested and sent to the Gestapo’s infamous headquarters at 84 Avenue Foch in Paris where prisoners’ screams could be heard coming from the building day and night. Tragically, Nazi officials were able to find records of Noor’s broadcasts and used them to send their own signals to London, luring new British spies to Franc

Although Gestapo headquarters were tightly guarded, Noor managed to break out of her cell and escape. The Gestapo tracked her down and arrested her just hours later. Now classified as “highly dangerous”, Noor was sent to Pforzhem prison in Germany where she was tortured and kept in chains in isolation for ten agonizing months. Despite being repeatedly questioned and tortured, Noor refused to divulge secrets about the radio transmission program and the identities of her fellow operators.

In September 1944, Noor and three other female spies were transferred to the Dachau concentration camp where they were shot on September 13. Noor was only 30 years old. Witnesses recalled that the last word she said moments before her murder was “Liberte”.

Noor Inayat Khan, descendent of Muslim royalty, embodied Hillel’s maxim, “In place where there are no leaders, strive to be a leader” (Pirkei Avot 2:5). Refusing to sit on the sidelines, she made the ultimate sacrifice in fighting the Nazis. Her courageous example deserves to be widely known.