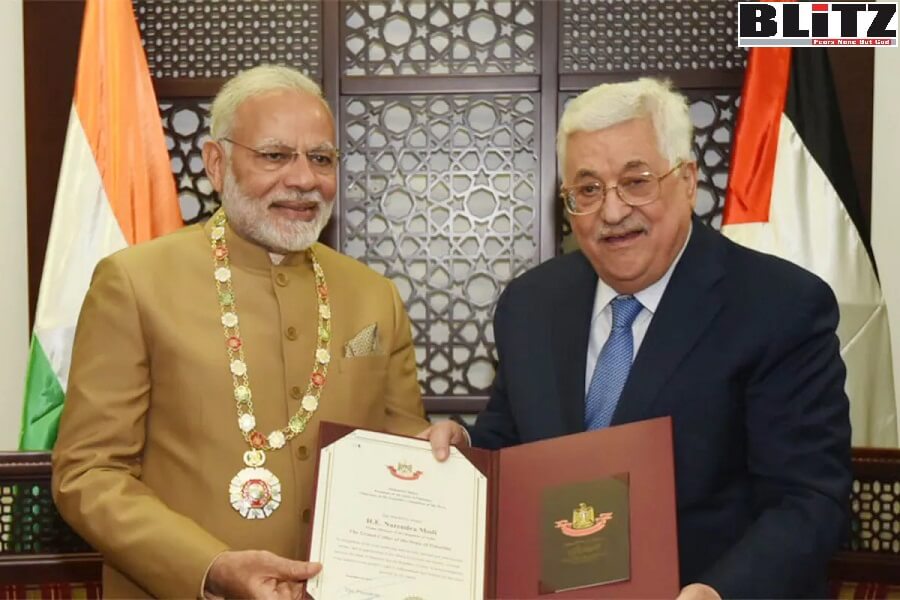 India condemned in unequivocal terms Hamas’s indiscriminate rocket attacks on Israel during the recently concluded 11-day war and called Jerusalem’s response retaliatory, recognizing the Jewish state’s right to defend itself. This reflects a clear change in New Delhi’s thinking, which is opposed to all forms of violence that affect human lives. Writes Dr. Anoop Kumar Gupta

The fourth major flare-up between Hamas and Israel in a decade ended with a ceasefire on May 21 after 11 days of fierce fighting during which the Gaza-based terror groups fired barrages of rockets on civilian centers in the Jewish State. Israel responded by fiercely pounding thousands of terror targets in the Strip.

The loss of innocent lives and the rubble on both sides evoked sharp reactions from the international community. India’s position came under sharp scrutiny, particularly after Israeli PM Benjamin Netanyahu extended his thanks to 25 countries for standing with Israel but did not include India. The rebuke by many who thought New Delhi should have stood by its strategic partner softened somewhat after Israel’s Deputy Chief of Mission at its embassy in India, Rony Yedidia Clein, expressed satisfaction with New Delhi’s position. While India did not make a “public expression of support” to Israel, Clein said, “we did have an understanding” with India. Israeli President Reuven Rivlin also thanked India for extending its support to Israel.

India’s permanent representative at the UN T. S. Tirumurti delivered two well-drafted and carefully articulated statements on India’s position on the situation in the Middle East and the Palestinian-Israeli conflict, the first at the UN Security Council on May 16 and the second at UN General Assembly debates on May 20.

India also expressed “deep concern over violence in Jerusalem, especially on Haram Al Sharif/Temple Mount during the holy month of Ramadan.” It pleaded that “the historic status quo at the holy places of Jerusalem, including the Haram al-Sharif/Temple Mount, must be respected.” The Indian representative’s use of the phrases “Haram al-Sharif/Temple Mount” acknowledges the reverence of both Muslims and Jews for the hilltop holy site. While India does not accept a unilateral and exclusive claim on the area by either party, it categorically rejects Hamas’s stated aim of destroying Israel and thereafter “raising the banner of Allah over every inch of Palestine.”

On the issue of possible eviction of Arab families in the Sheikh Jarrakh and Silwan neighborhoods of East Jerusalem, New Delhi sought at both UN bodies to put the process on hold while the matter remains sub judice.

At both the UNSC and the UNGA, India deplored Hamas’s unilateral military action against Israel. At the UNGA, India candidly stated that “we condemn the indiscriminate rocket firings from Gaza into Israel which have caused the deaths of a number of civilians.” It may also be recalled that an Indian national who was working as a caregiver in the Israeli city of Ashkelon was killed in a rocket attack from Gaza when she failed to make it to the shelter with her charge.

At both UN bodies, India asserted its belief that “every effort should be made to create conducive conditions for the resumption of talks between Israel and Palestine.” Here India seems to be holding Hamas responsible for creating an unfavorable environment for talks via its military aggression against Israel.

New Delhi also supported Israel’s right to defend itself at both the UNSC and the UNGA, describing Israel’s military action against Hamas as “retaliatory strikes into Gaza.”

At the UNSC, India voiced its support for the “diplomatic efforts of the Quartet” and other regional and global players “to calm the situation and put an end to the ongoing violence and seek to achieve durable peace.”

India supports the restarting of the deadlocked peace process. At both the UNSC and the UNGA, New Delhi emphasized the “need for [an] immediate resumption of dialogue between Israel and the Palestinian Authority.” This phrasing suggests that India does not believe Hamas should be a part of Israeli-Palestinian bilateral negotiations.

India reiterated its support for a two-state solution at both UN forums but in a very different tone. At the UNSC, it emphasized its “strong support [for] the just Palestinian cause and its unwavering commitment to the two-state solution.” The Indian statement at the UNGA supported “all ongoing diplomatic efforts… to bring the ongoing violence to an end and to seek durable peace, in line with the vision of two states living side by side within secure and recognized borders.” At both forums, India abstained from providing details about the specifics of a possible solution, and avoided delving into the problematic issues of the status of East Jerusalem and the pre-1967 borders.

During the conflict, India not only condemned Hamas’s indiscriminate military action against Israel but also delegitimized its attempt to present itself as the sole representative of the Palestinian people. India does not recognize Hamas and does not consider it a stakeholder in bilateral negotiations between Israel and the Palestinian Authority. India also categorically supported Israel’s military response to Hamas, thereby conveying the message that Israel has a right to defend itself against Hamas’s provocative violent adventurism.

The Indian national leadership during the British Raj did not support Zionist efforts to establish a national homeland for the Jewish people, and Mahatma Gandhi categorically asserted that Palestine is for the Palestinians. Consistent with that legacy, independent India took pro-Arab and pro-Palestinian positions while maintaining limited diplomatic engagement with Israel. India did not establish full diplomatic relations with Israel until the end of the 20th century.

Hamas emerged as a non-state terror actor in 1987 with the declared objective of destroying Israel, and conducted suicide bombings and rocket assaults against Israeli communities. Hamas was not a variable in formulating India’s policy toward Israeli-Palestinian engagement. Adjusting to changing geopolitical realities at the regional and global levels and toward an emerging alternative perspective at the domestic level, India established diplomatic relations with the State of Israel in January 1992, almost four decades after its independence.

India-Israel relations soon gained momentum and have flourished in many areas, reaching the level of strategic partnership. However, India’s position on the Israeli-Palestinian conflict has fluctuated. The Indian response to Israeli- Palestinian violence and particularly the Israel-Gaza conflict has been somewhat inconsistent. It went through an evolution during the BJP-led NDA I government under PM Atal Behari Bajpayee, the UPA regime led by PM Manmohan Singh of the Congress party, and the current NDA II government under Narendra Modi.

The NDA I regime under PM Bajpayee changed the course of bilateral relations. The Bajpayee government expressed concerns about Israeli- Palestinian violence while avoiding any condemnation of Israel. This was an important development as India displayed a balanced disposition toward the Israeli-Palestinian conflict.

NDA I avoided taking sides. Rather, in 2001 it urged both “parties to end all violent activity without conditions, cease provocations, and defuse the situation.” Commenting on a suicide bomb attack in Tel Aviv on June 1, 2001, the NDA I regime condemned the act of terror targeting Israeli citizens and stated without qualification that “such an act of violence cannot be justified on any grounds.” This was at the time when the two countries had decided to establish a joint working group on counter-terrorism. India and Israel not only condemned cross-border terrorism but displayed their commitment to intelligence-sharing on the terror networks.

During the UPA regime (2004-14) led by PM Manmohan Singh, mutually beneficial bilateral cooperation continued to develop and expand in various fields. However, relations were maintained at a low flame. The UPA regime’s diplomatic behavior was a bit different than that of NDA I regarding the Israeli-Palestinian conflict. During that period, India strongly criticized Israeli policies toward the Palestinian territories, especially the Gaza Strip.

In May 2004, India condemned the “large-scale demolition of homes in the Rafah Palestinian refugee camp in Gaza and indiscriminate use of force by the Israeli Defense Forces”. In October 2004, Minister of State for External Affairs E. Ahamed condemned “the escalation of violence in Northern Gaza and the disproportionate and large-scale use of force by the Israeli forces.” Commenting on the actions of Israeli soldiers in June 2006, India condemned “the killing of innocent civilians in Gaza by the Israeli Defense Forces in an unprovoked attack.” Reacting to the abduction of an Israeli soldier at the Kerem Shalom crossing near Gaza on June 25, 2006, India condemned the incident, which provoked a threat of massive retaliatory measures by Israel. During the 2008-9 Hamas-Israel conflict, India condemned “the ongoing incursion into Gaza by Israeli ground and other forces.” During the 2012 Hamas-Israel conflict, India avoided condemning Israel and stated that it is “deeply concerned at the steep escalation of violence between Israel and Palestinians focused around Gaza.” At the same time, India, along with IBSA members Brazil and South Africa, expressed “their strongest condemnation of ongoing violence between Israel and Palestine” and stressed ‘the urgent need to lift the blockade of Gaza.”

India’s policy in West Asia has seen a subtle change under PM Modi. Following the diplomacy of multi-engagement, India has successfully separated its ties with Israel and Palestinian Authority. India has tried to convey that it will consider every issue related to the Israel-Palestinian conflict on its merits.

The Modi regime refused to take sides on the Israel-Gaza conflict in 2014. India stated that it was “deeply concerned at the steep escalation of violence” and ruled out criticism of Israeli military operations against Hamas in Gaza, unlike in the past. It also forestalled a resolution that was demanded by opposition parties in the Rajya Sabha (Upper House of Indian Parliament). Rather, India suggested that Israel and the Palestinian Authority conduct peace talks to end the violence. In July 2017, Modi became the first Indian premier since independence to visit Israel.

India’s approach toward the Israel-Palestinian conflict has evolved. New Delhi’s Israel policy had long been deeply influenced by and dependent on the Palestinian issue, but Israel has emerged as an independent variable in India’s diplomatic engagement in West Asia. New Delhi’s statements at the UN regarding the fourth Israel-Gaza conflict indicate that India is no longer hyphenating Israel and the Palestinians. This reflects a change in India’s strategic culture under PM Modi by which Israel has emerged as a very important component of the country’s foreign policy.

Dr. Anoop Kumar Gupta has been visiting researcher at Hebrew University and is an alumnus of the School of International Studies, JNU New Delhi.