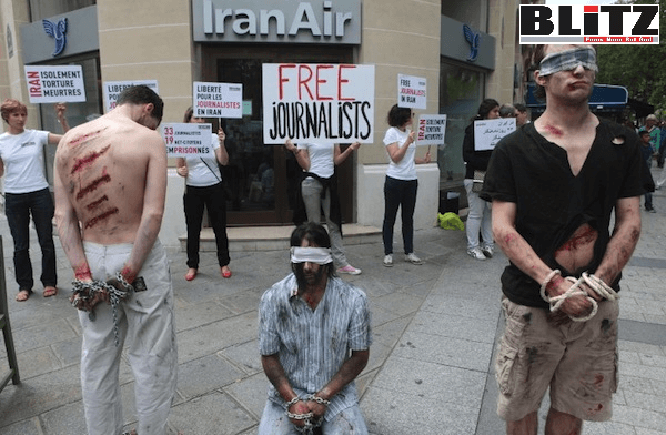 Last year, the rights of Iranian workers continued to be violated by the regime. Instead of responding to the rightful demands and protests of the workers who were rallying across the country to protest their poor living conditions and demanding their unpaid salaries and benefits, the government cracked down on their gatherings and detained them. It should be noted that more than 70% of Iranian workers live below the poverty line. One such example of repression against workers is the arrest and dismissal of several workers of the Haft Tappeh Sugarcane Complex in southwestern Iran in the summer of 2020. Writes Cyrus Yaqubi

Last year, the Iranian people continued to witness the most violations of their rights by the Iranian regime.

In his report to the 46th session of the UN Human Rights Council, Mr. Javaid Rehman, the UN Special Rapporteur on Human Rights in Iran, expressed concern and called on the Human Rights Council to pay special attention to human rights violations in Iran. Mr. Rehman based his report on news, and information available to him because the regime has not yet accepted his requests for a trip to Iran.

Mr. Rehman cited the high number of executions in Iran last year. According to him, at least 233 executions were officially reported by Iran’s officials last year. There have been no proper legal procedures for these executions. In particular, he noted the unfair trials of political prisoners Navid Afkari and Mostafa Salehi that led to their executions.

Also, Hedayat Abdullahpour, a Kurdish citizen (a member of the Kurdistan Democratic Party, was executed on May 11, 2020 despite the lack of evidence against him. The regime tortured him to force him to false confessions. Most recently on February 28, four Arab men in Khuzestan, namely Jasem Heidari, Ali Khosraji, Hossein Silavi and Nasser Khafajian, were executed in Ahvaz.

According to Javaid Rehman, Iranian detainees are secretly imprisoned without access to a lawyer and in solitary confinement under torture and even water and food deprivation. Of course, Mr. Javaid Rehman’s report is only a tiny part of what the regime is doing in Iran because the number of people who have been executed secretly is much higher than the published figures. The following are some of the human rights violations in Iran:

Violation of freedom of expression and access to information in Iran

Last year, the Iranian regime continued to censor most social network platforms such as Twitter, Facebook, etc. Also, it prevented the dissemination of news by completely cutting off the Internet or disrupting connections in cities and towns in Iran, where widespread protests were taking place. The latest case was the disconnection of the Internet during recent protests in Sistan and Baluchestan Province in southeastern Iran. Also, by increasing the Internet subscription fee, the regime is trying to prevent people from having access to the Internet, so they become less informed of current news and developments. With widespread poverty among the majority of the people of Iran, many cannot afford access to the Internet.

Last year, several students who could not afford cellphones to continue their education online (because of school closure due to the outbreak of COVID-19) committed suicide, which drew public attention.

Suppression of writers and journalists in Iran

The arrest and imprisonment of freelance bloggers and journalists was another aspect of repression in 2020. Below are a few examples:

Amad News director Ruhollah Zam was abducted from Iraq and executed on December 22, 2020, after a mock trial.

Mehrnoosh Tafian, a media activist, living in Ahvaz, was arrested and transferred to Sepidar Prison in Ahvaz on November 2020.

Journalist Nada Sabouri and her husband Sohrab Salehin were arrested on August 2020 on charges of contacting political prisoners’ families and covering news about them.

Soheil Arabi, who was initially sentenced to death for insulting Islamic sanctities, went on hunger strike. He has been under the most severe physical and mental torture in the regime’s prisons for eight years.

Photographer and journalist Noushin Jafari was sentenced to 5 years in prison on charges of “blasphemy” and “spreading propaganda against the state”.

Yasin Ghasemi Bajda, writer and translator, was arrested on February in Zahedan on charges of “blasphemy”, “insulting the founder of the Islamic Republic”, “spreading lies,” and “spreading propaganda against the regime”.

A significant number of dual-national Iranians were also arrested on espionage charges to pressure foreign governments.

Violation of workers’ rights in Iran

Last year, the rights of Iranian workers continued to be violated by the regime. Instead of responding to the rightful demands and protests of the workers who were rallying across the country to protest their poor living conditions and demanding their unpaid salaries and benefits, the government cracked down on their gatherings and detained them. It should be noted that more than 70% of Iranian workers live below the poverty line. One such example of repression against workers is the arrest and dismissal of several workers of the Haft Tappeh Sugarcane Complex in southwestern Iran in the summer of 2020.

Another example is the continuance of truck drivers’ strikes for their fundamental rights. Instead of listening to their demands, the government cracks down on drivers.

In western Iran, 143 border porters or “kolbars” were killed and injured in just six months after being targeted by regime forces in West Azerbaijan and Kurdistan provinces. Kolbars have no other choice but to carry heavy loads on their backs across the border due to the unemployment and poverty in western Iran.

Most recently in February 2021, dozens of Baluch people, who carry fuel across the border, were killed and injured in southeastern Iran by the Revolutionary Guards.

Violation of the rights of religious minorities in Iran

Last year, religious minorities continued to be subjected to a variety of limitations and discriminations. Many of them were imprisoned under false pretenses. These repressive measures included assaulting Bahais and barring them from studying at universities and finding employment in government offices solely for believing in the Bahai faith. Many prison sentences were imposed on the Bahais on many for illusory reasons. For example, Sofia Mobini and Negin Tadrisi, two Bahai women in Tehran were sentenced to a 10-year prison sentence. Most recently, Hamid and Saeed Naseri and Afshin Emami Yad were sentenced to 7 years in prison in February 2021 because of their Bahai faith. In another case, eight Bahais were sentenced to 11 years in prison in southern Iran. Furthermore, the regime in Iran has imposed pressure on the Dervish and Sunni community preventing them from carrying out their religious ceremonies.

In February 2020, after the initial concealment of the COVID-19 outbreak in Iran, the regime’s Supreme Leader Ali Khamenei acknowledged the spread of the virus in the country. He initially described the virus as insignificant and later used it as an opportunity to prevent protests and contain the people’s anger. He had hoped that people would forget their resentment towards the regime because of the widespread pandemic worries.

As a result of his utter neglect and non-preventive measures, Iran currently has the highest number of COVID-19 deaths after the United States. According to credible reports, the number of COVID-19 victims in Iran has now reached nearly 230,000. Despite the high death toll, Khamenei banned the import of the Pfizer and Moderna vaccines and promised instead to vaccinate Iranians with a “made-in-Iran” vaccine, scheduled to be released by the end of summer.

Given the change of government in the United States and the fact that the Biden administration wants to engage and reach an agreement with Iran on nuclear, missile and regional issues, will the regime’s human rights violations and the lack of freedoms in Iran be up for discussion in future negotiations and as a condition to lift sanctions?

Khamenei knows that the reason the Shah was deposed was because of Carter’s human rights policy and the cessation of torture and execution by the Shah. Therefore, it is very unlikely that he would agree to respect and protect freedoms as this is synonymous with the end of the regime’s 42-year rule.

This article was originally published in the Iran News Wire