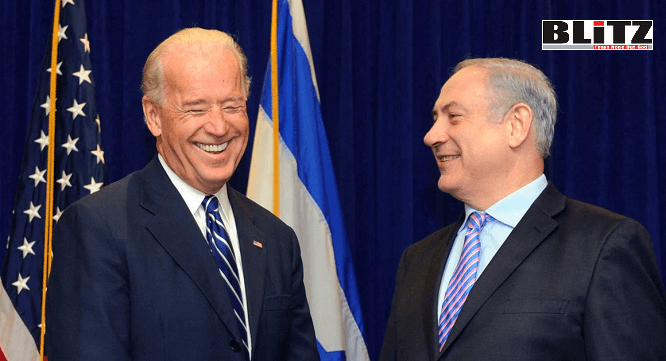 First, on Tuesday, the Palestinian Authority announced it is renewing its security coordination with the Israel Defense Forces after suspending it six months ago. The P.A. also expressed willingness to accept tax revenues that Israel collects on its behalf. The P.A. has refused to accept the tax revenues since June because, in accordance with Israeli law, the government announced that it would deduct from them the sums the P.A. pays monthly to terrorists.

The P.A.’s sudden willingness to renew security coordination and accept money from Israel is clearly intended as a gesture of goodwill towards presumptive President-elect Joe Biden and his team. Over the past two weeks, the members of Biden’s team have made it clear in open and closed forums that they intend to reinstate the Obama administration’s Palestinian-centric Middle East policies immediately after taking office.

Speaking of the Biden team’s messaging, a Palestinian official explained earlier in the week, “We have received many positive messages from the Biden team in the past few days. We are looking forward to opening a new page with the Biden administration after the damage caused by the Trump administration.”

According to Israeli political sources, Biden’s team intends to reinstate negotiations between Israel and the PLO on the basis of the long-mordant Oslo accords. The sources claim Biden is even taking Oslo mediator Dennis Ross out of cold storage for that purpose. Ross’s longtime deputy Aaron David Miller penned an op-ed in Canada’s National Post this week where he argued that President Trump has been bad for Israel and good for Prime Minister Benjamin Netanyahu.

Biden, Miller insisted, would be good for Israel (and by extension, bad for the democratically elected prime minister). Miller argued that Israel is better off when the United States places the Palestinians center stage and joins the Europeans in genuflecting before Iran and its nuclear weapons program under the guise of nuclear diplomacy.

In 2013-14, Martin Indyk served as the head of then-Secretary of State John Kerry’s negotiations team. Indyk pulled out all the stops to coerce Israel into transferring the vast majority of Judea and Samaria to PLO control and to partitioning Jerusalem. He bitterly blamed Israel when his aggressive efforts came to naught.

Now back in business, Indyk published an article last week on NBC‘s website setting out how Biden should go about reinstating Obama’s Middle East policies.

Indyk argued that to advance the cause of peace, Biden should pick on Israel. Biden, Indyk advised, needs to force Israel to accept the Kerry (Indyk) plan as a basis for negotiations, ban all Israeli Jewish construction in Jerusalem and Judea and Samaria and force Israel to give land in Judea and Samaria to the PLO. Indyk called on the Arab states that have peaceful relations with Israel to reinstate the Palestinian veto—conditioning ties with them on Israeli concessions to the Palestinians.

Indyk’s advice is noteworthy in the context of the two other events that happened last week. First, Wednesday saw Bahraini Foreign Minister Abdullatif al-Zayani arrive in Israel for a first official visit by a Bahraini leader. During his meetings in Jerusalem, al-Zayani formally requested to open a Bahraini embassy in Israel and committed to further strengthening bilateral ties between Manama and Jerusalem.

Along the same lines, the week before, Abu Dhabi’s Crown Prince Sheikh Mohamed bin Zayed accepted President Reuven Rivlin’s invitation to pay an official visit to Israel. Al-Zayani’s visit, like bin Zayed’s announcement, indicates that Israel’s partners in the Abraham Accords have no intention of following Indyk’s advice and subordinating their national interests to the whims of the PLO’s decrepit leadership.

Indeed, they have positively had it with the Palestinians and their grievance-mongering. Last month, a UAE official referred to the P.A. and Hamas as “corrupt murderers,” and Saudi writer Osama Yamani published an article earlier this month in the regime-backed Ukaz newspaper rejecting the Palestinians’ Islamic significance.

Titled “Where is Al-Aqsa Mosque?,” Yamani’s article insists that the Palestinian and Muslim Brotherhood claims regarding al-Aqsa, the place Islam’s Prophet Muhammed alighted to in his nighttime flight to heaven, are false. The Palestinians and the Muslim Brotherhood say that al-Aqsa is the Temple Mount in Jerusalem. But in keeping with Saudi Wahabi belief, Yamani insisted that al-Aqsa is in Jarana, a village located 30 kilometers (18 miles) northeast of Mecca.

Needless to say, if the Sunni Arab world outside the Brotherhood’s orbit embraces the Wahabist view, Arab support for the Palestinian war against Israel will dry up regardless of who sits in the White House.

The third diplomatic event of the week was U.S. Secretary of State Mike Pompeo’s historic visit to a winery in Samaria. Psagot Winery’s award-winning wines have made it a top target for the anti-Semitic boycott, divestment and sanctions (BDS) campaigns against Israel. Ahead of Pompeo’s visit, the first by a U.S. secretary of state to an Israeli community in Judea and Samaria, Pompeo met with Netanyahu in Jerusalem. Referring to BDS as a “cancer,” Pompeo announced, “We will recognize the global BDS campaign as anti-Semitic.”

Pompeo visited Psagot because a year ago, its owner created a new blend called “Pompeo” in honor of the secretary of state following Pompeo’s landmark decision to renounce the State Department’s longstanding position that Israeli communities beyond the 1949 armistice lines are inherently illegal. The Pompeo Doctrine determined that there is nothing inherently illegal about Israel’s communities in the areas.

Pompeo’s visit wasn’t merely a public relations victory for Israel and its long fight against those who reject its very right to exist, and al-Zayani’s visit was no mere formality. Both visits, like bin Zayed’s decision to come to Jerusalem and Yamani’s article, are invitations for the Netanyahu government to make the best use possible of Trump’s remaining time in office.

While fighting his legal battles against what appear to be gross acts of election fraud which may even have tipped the elections in Biden’s favor, President Trump is also working to anchor and solidify his achievements.

Foreign affairs have figured prominently in these efforts. Trump’s decision to fire his contrarian Defense Secretary Mark Esper and other key Pentagon officials and replace them with professionals who share his strategic outlook has been seen mainly as a means for Trump to keep his 2016 pledge to draw down U.S. forces from Afghanistan after 19 years.

But it is possible that there will be other consequences to Trump’s late change of Pentagon leadership, particularly in relation to Iran and its nuclear weapons program.

This week, the New York Times reported that after the elections, Trump considered taking military action against Iran’s nuclear installations but was convinced to stand down. It’s impossible to assess the credibility of the report but it seems far-fetched that administration officials involved in such classified discussions would share their contents with a paper that has spent the past four years bashing Trump.

What we do know from the past four years of Trump’s leadership of U.S. policy towards Iran is that although he is not at all eager to fight Iran directly, Trump won’t try to stop U.S. allies from fighting Iran directly.

Earlier this week it was reported that Israel is grudgingly presenting Biden’s team with its positions ahead of their renewed nuclear courtship of Iran. As Netanyahu and his advisers prepare for a Biden administration, it behooves them to take advantage of the current diplomatic and strategic state of play to minimize Iran’s ability to develop a nuclear arsenal. With the Saudis and other Arab governments publicly warning Biden and his associates not to re-enter nuclear talks with Tehran, it is a safe bet that Israel won’t be alone in its efforts.

As for the Palestinians, in his missive, Indyk wrote contemptuously, “Trump’s ‘deal’ [for peace between Israel and the Palestinians] should be taken off the table when he departs the White House.” Biden’s team’s efforts to date indicate they share Indyk’s view and fully intend to begin where Indyk, Kerry and Barack Obama left off four years ago.

But, as Pompeo’s visit to Psagot Winery makes clear, for now, Trump’s “deal of the century,” which supports Israeli sovereignty over the Israeli communities in Judea and Samaria and in the Jordan Valley, is still very much on the table.

The leaders of the Israeli communities in Judea and Samaria are calling for the government to use the next two months to normalize the status of Israel’s younger communities in the areas. It certainly makes sense to follow their advice with all due haste. It is similarly important for the government to restore the decision-making power for planning and construction schemes in Judea, Samaria and unified Jerusalem to local planning boards.

As part of the Obama administration’s explicit efforts to demonize Jewish life in these areas, Obama coerced Netanyahu into agreeing that every new construction project in them would require the prime minister’s signature to move forward. That move, made under duress, should be abrogated immediately.

More to the point, in the face of the open hostility Biden’s team is now expressing towards those property rights and towards Israel’s sovereign rights in Judea and Samaria more generally, it would be eminently reasonable, and indeed a matter of great urgency, for the Netanyahu government to secure Trump’s permission to apply our sovereignty to Israel’s communities in Judea and Samaria and to the Jordan Valley in the framework of the Trump peace plan.

A good target date for such a move would be Dec. 23—the fourth anniversary of the Obama administration’s facilitation of the passage of United Nations Security Council Resolution 2234, which libelously defined Israeli communities and neighborhoods in Judea, Samaria and Jerusalem as a “flagrant violation of international law and a major obstacle to the achievement of the two-State solution and a just, lasting and comprehensive peace.”

The Abraham Accords have ushered in an era of comprehensive peace. The two-state solution, such as it is, can only be viable if Israel has secure borders and if the Palestinians recognize the Jewish people’s national rights to our ancestral homeland, which includes unified Jerusalem, the communities in Judea and Samaria and the Jordan Valley. And, as the Pompeo Doctrine made clear, the Israeli communities are not inherently illegal. Israel has sovereign rights to Judea and Samaria under international law.

The events of the last several days demonstrate clearly where we are and where we are heading. It is critical that Israel take advantage of where we are to secure its interests as it moves towards a new diplomatic reality in January.