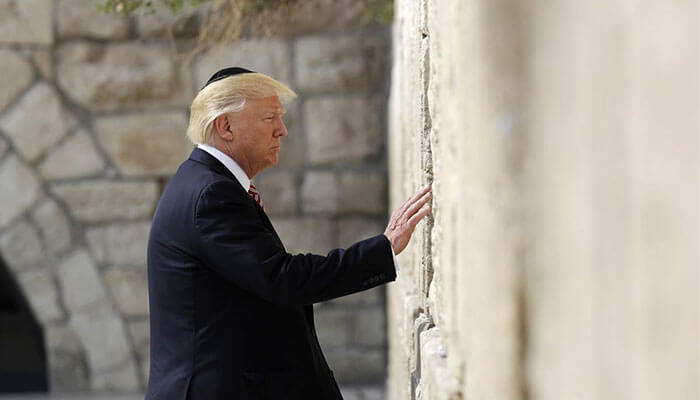 It is too early to conclude whether US President Donald Trump is a well-calculated genius or an impulsive idiot when it comes to foreign policy, but he certainly has a talent in pointing out anomalies in world affairs that no one else dares mention. In this respect one might compare him to the little boy, who pointed out that the emperor was naked in “The Emperor’s New Clothes.”

Trump did it in the case of China’s foreign trade practices, which are highly problematic within an international regime of alleged free trade, and several days ago he did it again in the case of the United Nations Relief and Works Agency for Palestine Refugees in the Near East.

UNWRA is a relief agency that supports over five million registered Palestinian refugees and their descendants, who during 1948/49 Arab-Israeli War fled or were expelled from their homes in territories that became the State of Israel, as well as those who fled or were expelled from the West Bank following the 1967 Six Day War. Some 69 years after it was established in December 1949 UNWRA is still responsible for the basic food provision, education, health care and social services for registered Palestinian refugees in Jordan, Lebanon, Syria, the Gaza Strip and the West Bank.

UNRWA is the only UN refugee agency dedicated to helping a specific group of refugees and their descendants to perpetuate their refugee status, rather than put an end to it, while UNHCR (the UN High Commissioner for Refugees), established 1950, is responsible for aiding all other refugees around the world, and its mandate is to try to help terminate their refugee status by their permanent integration in the countries where they are currently residing, resettlement in third countries or repatriation when possible. UNHCR is not responsible for the descendants of refugees born after they became refugees.

Within the framework of his policy regarding a solution to the Israeli-Palestinian conflict (whatever that policy may be), Donald Trump has decided to stop all US financial contributions to UNWRA, which are significant, since the US is the main contributor to the budgets of the UN and its agencies since the establishment of this organization toward the end of the Second World War (another ongoing anomaly). Trump has argued that besides being anomalous, UNWRA is also ridden with corruption (which is probably true), and that there is no earthly reason why the descendants of the refugees should inherit the refugee status of their forefathers. Trump also claims that the number of authentic Palestinian refugees today (i.e. first-generation refugees) is half a million – a figure whose origin is not clear, and seems rather questionable given that originally the number of refugees was somewhere between 500,000 and 700,000.

Given the reality, it is more than likely that the only way to put an end to the anomaly of UNWRA is by means of drastic actions, such as those introduced by Trump. However, if such actions are unilateral and uncoordinated, and are not based on any long-term plan for the future, it is doubtful whether they will really put an end to the anomaly, or help resolve the problem that created it, rather than generate more chaos.

The problem with Trump’s policy vis-a-vis UNWRA is that as a result of the immediate humanitarian problem it is likely to generate, at least temporarily, others (especially the EU, the Arab Gulf States and perhaps even Iran) are likely to dish out the sums needed to cover the deficit in UNWRA’s budget, not least of all in order to enable the opening of the school year in the schools that UNWRA runs, and in which many hundreds of thousands of Palestinian children throughout the Middle East receive their education.

But what next? Is it likely that as a result of the new situation progress will be made in resolving the Palestinian issue? Given the current complicated geo-strategic situation in Syria and Iraq, will anyone have the time, energy and resources to concentrate on the Palestinians, and can anyone seriously suggest that the 70-year-old Palestinian refugee problem is more urgent and acute than the relatively recent refugee problem that Europe and North America are trying to contend with, that results from chaos in various parts of Africa, and Muslim Asia?

Listening to what the Israeli media has had to say about the current UNWRA issue (not very much) one gets the impression that most Israelis are being led to believe that Trump’s policy regarding UNWRA is a distinctly pro-Israeli move, like the transfer of the American Embassy to Jerusalem. The problem is that it is doubtful whether in the absence of any clear and realistic strategic thinking on the part of the US president regarding the consequences and follow-up of these moves, Israel will actually end up benefitting from them.

Since the current Israeli government is not committed to the two state solution (most of its members are actually openly opposed to it), one cannot see how Israel will benefit from UNWRA being financed by states and organizations that are less friendly to Israel than the US, or from the disappearance of services that have been provided by UNWRA in the last 69 years, which will have to be picked up by the Palestinian Authority in the West Bank, by the Hamas in the Gaza Strip, or by Israel itself, in the event that it will choose to regain full control in these two territories.

If nothing else, the current UNWRA crisis highlights the fact that there is no escape from some long-term, hopefully permanent solution to the Palestinian issue that also takes Israel’s most vital security and existential concerns into account.

I believe that it is vital for Israel to start thinking about this more seriously than it has done in the past. Empty slogans – from both Right and Left – won’t do, nor will the belief that somehow God will enable us to hold on to the whole of the Land of Israel west of the Jordan River while the over five million Palestinians who live in this area with various statuses [according to 2015 UNWRA statistics two million of them have refugee status, and according to the Israeli Central Bureau of Statistic there are around 1.8 million Arabs (i.e. Palestinians) with Israeli citizenship], will somehow accept this peacefully or simply evaporate.

As Israel’s first Prime Minister David Ben-Gurion once said, “It doesn’t matter what the gentiles say. What matters is what the Jews do.” That applies even when the gentile is Donald Trump. So what are we going to do?