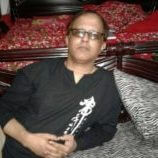 We in American Chronicle heard the name of Salah Uddin Shoaib Choudhury back in 2003, when he was arrested from the Zia international Airport on his way to Tel Aviv to attend a peace conference jointly organized by the Hebrew Writers’ Association and Tel Aviv University. At that time, he was just a new name to many of my colleagues but not to me. Because, I knew this name for many years as I was working in a number of best selling newspapers as a popular writer.

My colleagues were pessimistic seeing the news that a ‘Mossad agent’ is arrested in Bangladesh and all of them thought, this is the end of the episode. But, I told Christopher Giddings and my colleagues, showing his photograph released by AFP – Look into his smiling face! This proves, he is not any ordinary Tom, Dick and Harry. His face is very confident. Meaning he knows with very certainty that the people and the country, for whom he stood up ignoring the popular opinion, would most certainly stand in his defence. This man will walk out of the prison with full dignity and the government which has arrested him and falsely labeled him as Mossad agent will pay a very expensive cost. I told them, being a journalist for many years; I know and greatly admire the Jewish people and the State of Israel. They will never abandon this man. I am seeing tomorrow’s Nelson Mandela in him. Just remember my words!

Months passed, but as Salah Uddin Shoaib Choudhury was still in prison, my colleagues mocked saying “What has happened to your ‘Nelson Mandela’? He still is in jail and the Jews and Israel have done nothing for him.” I replied, just wait and see!

In 2004, Bangladesh authorities did not even allow him a bail on parole to attend his mother’s funeral. Hearing this terrific news, I could not sleep for the entire night, though I never met that person.

On the seventeenth month, when we heard the news about very sudden release of this maverick, everyone was shocked but me. I told them, remember what I said? See how he is released like a hero. Not like a rat or mouse. My colleagues thought, I might have some contacts with Jerusalem. Actually they were wrong. I never had contacted Jerusalem and it goes beyond my dignity contacting and bothering anyone unnecessarily. Almost in a week, I sent an email to Salah Uddin Shoaib Choudhury, inviting him to write for the American Chronicle. He was very warm in the response. From that day, he became my friend – a friend for life. Jewish people say, “The man who abandons his brother is not a man”, I have never abandoned Shoaib Choudhury even though when the entire world had abandoned him. Eventually he became a member of the American Chronicle family.

In 2012 When Shoaib Choudhury was re-arrested in another false case of fraud sponsored by dubious company named Prochchhaya Limited, my colleagues here again asked – “What’s going to happen with your Nelson Mandela this time? He is screwed! His career and reputation are doomed. He’s gone this time!” I disagreed with my colleagues and said, look here on to me. I am telling you with certainty, this time he is victim of some corrupt individuals or corrupt ruling elites – joined by some enemies in disguise of Israel. He’ll return to us. Take my words for granted. If he continues his noble mission even after enduring the sorrows and sufferings in the prison for the second time, he’s going to become a Nelson Mandela for sure. This time I even assured them, he won’t leave his noble path. He will ignore the red eyes and most possibly will become a hero.

My prophecy turned true again. On August 3, 2018, we suddenly read an article online hearing the big news that our very adored and admired Salah Uddin Shoaib Choudhury has been released from prison. By that time, American Chronicle has stopped its publication and I have joined another newspaper. Just out of curiosity, when I called him, he received in his very warm signature tone saying … Anitaaaaaaa!!! I was amazed this time. How a person of his status can remember my number and recognize me instantly. Then I were totally confident … Salah Uddin Shoaib Choudhury is tomorrow’s Nelson Mandela and Mahatma Gandhi.

Salah Uddin Shoaib Choudhury is a traitor, a blasphemous [for confronting radical Islam; denouncing anti-Semitism and Holocaust denial; defending Israel and promoting interfaith harmony] in the eyes of Bangladeshi law. He may even be seen negatively by majority of the 170 million people of that country. But, I know, he deserves to be admired and respected as a very precious individual. When I asked, may I ask you few questions [with the idea of having his quick interview], he laughed from the other part of the world, saying – “Why not!”

My first question to him was, are you going to abandon what you have been doing since 2003?

He asked, “You mean my support for Israel and my stand against radical Islam? No Way! The word ‘retreat’ isn’t in my vocabulary. I will continue my mission. Nothing can suffocate my voice.”

I asked, during your stay in the prison, American President Donald Trump has moved the US embassy from Tel Aviv to Jerusalem. People are critical of this step. Even former US President Barack Obama is against this decision. Don’t you think, by doing so President Trump actually has made the two state policies for restoring peace in the Middle East impossible?

Shoaib Choudhury didn’t waste even a second but started saying, “Look here my friend, there has never been any country named Palestine in the Arab world. This very word is absent from the Arabic vocabulary; because there is no ‘P’ in the Arabic alphabet. Actually the word Palestine is Hebrew, which means invader. So, Arabs in other side of Gaza are just invaders – you can say – they are illegal and illegitimate population. They can of course ensure peace in that region, should the Arab abandon their false statehood and embrace the Israeli flag. But for doing so, first of all, they will have to cease relations with Hamas – a mega terrorist outfit. Unless and until the Arabs do not come out of the rogue culture of stoning Israeli civilians and security forces – unless the Arabs do not stop their men and women from becoming radical Islamic terrorists, Israel may not grant them citizenship.

“I had forecasted in 2016, that Donald Trump will become the US President. My assumptions turned true. In my eyes, Donald Trump is a real hero. He is a man of rare virtue. He has finally recognized Jerusalem as the undivided and eternal capital of the Jewish State. Should I meet him in person, I definitely will love to embrace him saying – Mazel Tov!

“In the Trump administration, I have a few old friends. For example, Mike Pompeo and John Bolton. Both of them know my name. I know them personally and know – they too are heroes. With such an excellent team, President Donald Trump can definitely make America great again. He is the savior of the American people and hundreds and thousands of repressed and oppressed people around the world.”