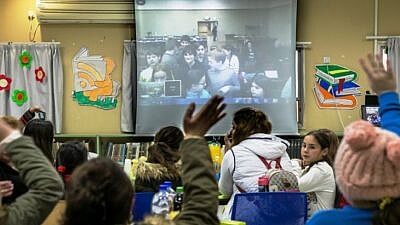 For the last four years, a virtual classroom has united students from Akko’s Weizmann School and Indianapolis’s Bureau of Jewish Education, including joint programming during the holidays of Passover and Tu B’Shevat. Though more than 6,000 miles separate them, they can meet each other, interact and collaborate. They share facts about Indianapolis and Jerusalem, and discover their similarities and differences.

“It is very exciting that when the children in Israel and Indianapolis see each other across the screen and have the next best opportunity to directly interact, even if not in physically in the same room. It instantly reduces the distance between them,” says Eti Salamander, social coordinator at the Weizmann School. “It is a form of touching.”

The Akko-Indianapolis programming is part of the Jewish Agency for Israel’s Global School Twinning Network, which provides hundreds of schools in Israel and worldwide with living, breathing connections that transform Israel and the global Jewish people from abstract concepts into tangible realities. Israel’s Ministry of Education and Ministry of Diaspora Affairs recently announced that it will allocate more than $2 million to the Jewish Agency for the twinning network, primarily to fund its expansion to 500 additional Israel-Diaspora school partnerships.

Israel’s Ministry of Education has been an important partner in school twinning since its inception in December 2011 by helping the network develop its curriculum; convene educators for shared learning and training; provide virtual platforms; and other resources. But this represents the state’s first direct monetary investment in the program.

School twinning changes the way students and teachers perceive their roles as members of an international Jewish community, as it also fosters dynamic dialogue on Jewish and Israeli identity. It has been long recognized that a strong relationship with Israel helps strengthen the Jewish identity of overseas Jewry. However, it is equally important for Israeli students and educators to understand that they are part of a global Jewish people with an equal role and responsibility. School twinning is designed to nurture this consciousness at a young and formative age on both sides of the ocean. The secret sauce of its success is the people-to-people element—meaning the direct engagement between the students and teachers that bridge the distance.

In the 2016-17 school year, the Jewish Agency’s network included 600 schools, serving 52,000 students and 2,000 teachers. Key elements of the network include the School Twinning Resource Center, a website that offers an extensive collection of lesson plans, educational activities, event plans and teacher guides, both in English and Hebrew; the Online Virtual Classroom, an interactive meeting space that serves as a platform for joint learning, forums, blogs, surveys, photo galleries and chats; and special curricula for twinned schools that focus on STEM (science, technology, engineering and math) subjects.

Participating teachers consider the initiative an important tool in strengthening Jewish identity and connection to other Jews, and appreciate sharing knowledge with other teachers that helps them overcome time, language and cultural challenges.

“I believe that our program’s success stems from its ability to engage the students, educators and parents in promoting Jewish peoplehood,” says Dina David, a teacher in Indianapolis.

Tony Ziv, chairman of the Education Committee of P2G’s Western Galilee partnerships, which include Indianapolis, says school twinning “allows all sides to feel the love of the land of Israel and their common Jewish identity.”

School twinning was the first major offshoot of the Jewish Agency’s Partnership2Gether Peoplehood Platform (P2G), which connects 450 Jewish and Israeli communities and organizations around the world in 46 city-to-city and region-to-region partnerships, generating hands-on projects and personal interactions that engage 350,000 Israelis and members of world Jewry each year. In many cases, school twinning is an integral part of one of the 46 P2G partnerships. However, one of the first goals of the Global School Twinning Network was to bring ongoing and direct engagement with Israelis to Jewish communities not currently part of P2G, for example, in the former Soviet Union, Latin America and Europe.

As a result of school-twinning in Tucson, Ariz., students in 32 classrooms ranging from preschool to eighth grade enjoy a continuum of engagement with Israeli from year to year, and form long-lasting bonds with their Israeli counterparts in Kiryat Malachi and Hof Ashkelon. Likewise, teacher fellowships enable educators on each side of the partnership to visit Israel and Arizona. Young students from Modi’in and Rochester, N.Y., simultaneously read the book Under the Same Moonwith their parents during the course of an academic year, emphasizing that regardless of how far apart they are geographically, the same moon shines for all. By the end of the year, the students and parents gain an understanding of how much they have in common, despite the distance between them.

Sixth-graders from Mateh Yehuda prepare a recipe book together highlighting their cultural uniqueness and throughout the year celebrate the Jewish holidays together in live ceremonies that underscore their shared heritage.

Through their new investment in the School Twinning Network, Israel’s Ministry of Education and Ministry of Diaspora Affairs are striving to enrich the experiences of students and teachers in Israel and throughout the Jewish world to more deeply understand the relationship towards Israel in overseas schools and communities, and to help twinning become an even greater part of participating schools’ fabric and culture. These objectives will be accomplished through new additional components to the twinning program, such as sessions with the parent-teacher association, as well as all teachers and educators in participating schools, to raise their understanding and consciousness to global Jewry and Israel-Diaspora relationships. In other words, it prepares them to understand the underlying importance of why their school engages in school twinning for both the Israeli and Diaspora students, and having it become part of the participating school’s vision.

The personal and professional friendships, attachments and emotional investments created by P2G initiatives such as the School Twinning Network establish the bedrock of a global Jewish family. It is gratifying that the State of Israel, by generously investing in the network, has displayed its understanding of the crucial priority of Israel-Diaspora connectedness and has ensured the vitality of this groundbreaking educational programming for years to come.

Andrea S. Arbel is director of the Partnership Unit at the Jewish Agency for Israel.