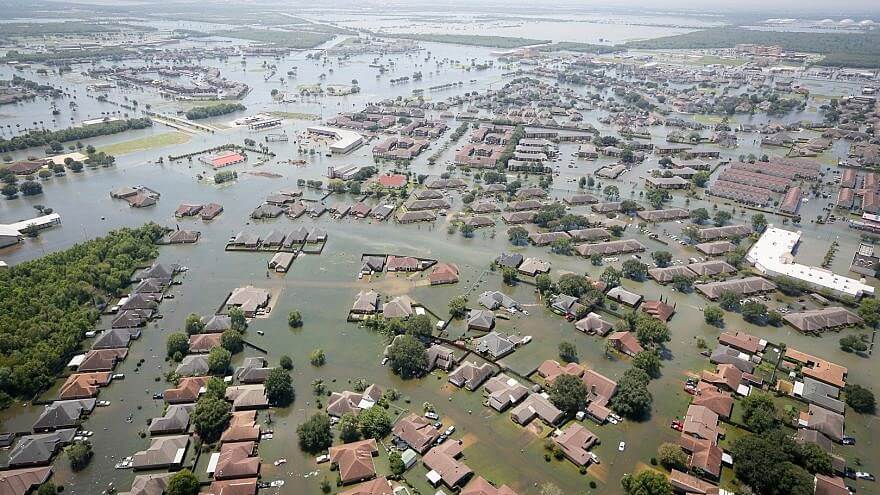 A pyramid of sodden prayer books, flood waters pouring into a sanctuary, bed-ridden patients at the Jewish senior residence being rushed up stairs to higher ground, a crib reduced to splintered pieces.

These are the images that continue to haunt the dreams of many of the 51,000 Jewish men, women and children who call the greater metropolitan area of Houston home. It’s been one year since 51 inches of rain pummeled the area, beginning on Shabbat morning, Aug. 26, and dumping an inconceivable 19 trillion gallons of water on the area. As the National Weather Service reported: “This event is unprecedented, and all impacts are unknown and beyond anything experienced.”

It’s been a year since Hurricane Harvey—the worst storm the United States has seen in more than a decade—devastated Houston’s Jewish community. Situated at the epicenter of the storm, Houston’s Jewish institutions—two major synagogues, a day school, the JCC and the senior residential center—suffered $50 million worth of damage. In addition, more than 2,000 Jewish homes were destroyed or badly harmed, roughly half of those in the Jewish neighborhood of Mid-Brays/Meyerland.

The above-mentioned crib belonged to Yael and Scott Ross, who, as the waters descended, were expecting their first child. “The baby furniture had been delivered the week before; the room was painted, and we were ready,” said the first-time mom. Or so they thought. By Aug. 30, the furniture was in pieces, the house flooded and her video producer husband’s expensive equipment destroyed, a loss the insurance company would refuse to cover.

The good news: That week an army of volunteers and firefighters went through the neighborhood pulling out anything that appeared to be salvageable. “Jewish and non-Jewish, everyone came out to help,” says Ross. “It was amazing to see all kinds of people coming together to do whatever they could.”

The competition for an undamaged apartment was fierce then, but a friend finally found them one, and several others contributed to the couple’s rent and some new furniture. “I’ve always worked for nonprofits, helping people in need, but this was the first time I’ve ever been on the other side as someone needing the help,” adds Ross.

Like so many other families, they had to decide whether to rebuild (including the high cost of raising the structure above flood level) or sell and leave the bosom of the Jewish community. “Now we’ve bought a house that represents a financial stretch, which means we’ll have to reassess whether we can afford to send our children to Jewish day schools,” she says.

The upshot: Their old house is on the market, along with other houses on the block, with no buyers in sight.

‘Focused on the sustainability of a strong and vibrant Jewish life’

From bake sales to auctions to Jewish federations across the country mounting Harvey campaigns, fundraising has taken many creative turns. A notable contribution was the unprecedented gift of $1 million from the State of Israel.

“I really was astonished,” says Gilad Katz, Israel’s consul general for the Southwest United States, who requested the support. “We described the devastation and hoped for a donation, but never expected this kind of sum.”

It’s the first time a gift of this magnitude has been given in money, not in rescue services, he adds. “And the donations are usually the other way around—from America to Israel. But this gift from the citizens of Israel is powerful proof that the solidarity between us goes both ways.”

For the last year, healing the community has been the driving force of Joe Kaplan, a private equity investor focused on “who, what and how we can help.” Spearheading a fundraising campaign that has brought in $22.4 million to date, Kaplan and his team assist with everything from providing grants to rebuilding homes to hiring extra case workers for the Jewish Family Service, which administers much of the aid, and works with victims to get insurance and government benefits. Several more millions are still needed for both institutional and residential rebuilding.

“After a year, much of the need remains,” says Kaplan. “But it’s easy to fall off people’s radar screens.” One sample: After holding services in its social hall this year, United Orthodox Synagogues of Houston is beginning an estimated two-year project: rebuilding its sanctuary on higher ground.

With all of its losses—besides its homes and institutions, the community’s sense of security has been badly shaken—born in its place is a newfound sense of the “R” word: resiliency, a word that’s found its way into the communal conversation.

“We are building on a solid foundation of vibrant Jewish life,” says Jewish Federation of Greater Houston president and CEO Avital Ingber, who accepted the job a few weeks before Harvey’s rains began to fall on Houston. “We are determined not to lose a generation—to make sure they still have summer camps, day-school tuition, Jewish preschool and Israel trips,” she says. “Even when we’re looking at such things as flood mitigation, insurance benefits, government aid and flood walls, we are focused on the sustainability of a strong and vibrant Jewish life.”

Yet much of the caring and sharing is homegrown in Houston. “I’ve fallen in love with the people of this town,” says Ingber. “After Harvey hit, I had no idea what to expect, but I’m so impressed with the way the people went out of their way to help each other—all streams of Judaism working together to rebuild this community.”

Rabbi Brian Strauss agrees. During his 18 years at Congregation Beth Yeshurun, the country’s largest Conservative synagogue (with nearly 2,000 member families), last August was the first time he ever saw the contents of his office afloat or encountered six feet of standing water in the sanctuary. “It’s been a tough year,” he says with a sigh. “But it’s also been one that’s seen a lot of growth. I think we’re stronger now, more patient with things not under our control.”

A key lesson, adds Strauss, is “that no matter what you are facing, you can always reach out and help someone worse off than you. Many of our congregants who are still struggling to rebuild their lives dig deep to help the next guy.”

One impressive victory: Last year’s High Holiday services were held in a church. “This year, we’ll be back in our own synagogue,” he says. “We weren’t at all sure we’d make it in time back in our own place, but here we are.”

And no natural disaster can kill the hope that a new baby brings.

Now 10 months old, the Rosses’ son bears the name of his paternal great-great grandfather Leo, a founder of the Houston Jewish community. His middle name, Alexander, “means ‘protector of life,’ honoring all those who helped us,” says mom Yael. “Until the flood, I never realized the importance of being part of a caring community,” she adds as Leo Alexander calls from the next room. “I hope and pray our son grows up to help others the way we have been helped.”

To contribute to the Hurricane Harvey Relief Fund, send donations to the Jewish Federation of Greater Houston at 5603 S. Braeswood Blvd., Houston, Texas 77096 or visit: www.houstonjewish.org/hurricaneharveyrelieffund.

Like Loading...
Recommended for you:
Continue Reading
Advertisement
You may also like...
Related Topics:From America to Israel, From bake sale to auctions, Helping people in need, The upshot