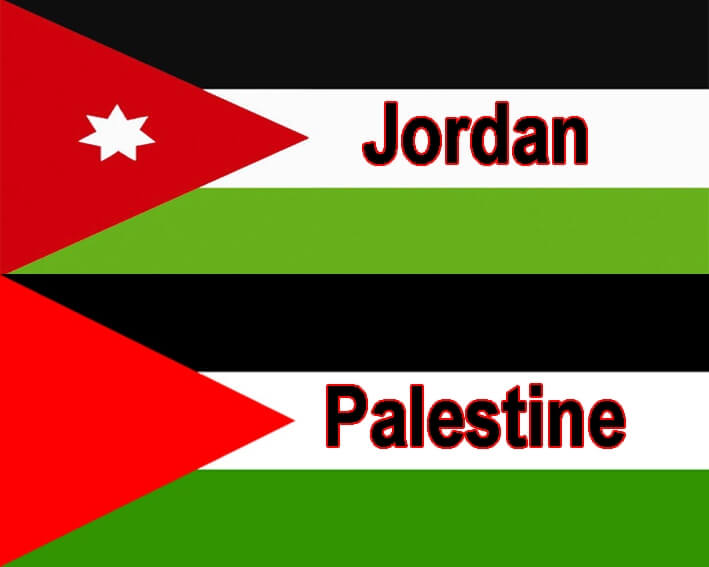 The vaunted two-state solution is defunct, because the Palestinian Arabs want to annihilate Israel, not “live alongside of Israel in peace.” The one-state solution has its own insurmountable problems. So, what is the best alternative other than continuing the status quo? Jordan as the State of Palestine.

When the Balfour Declaration was promulgated in 1917 during WWI, it included all of today’s Israel and Jordan, with the idea that the “National Home” for the Jews would be established “in” Palestine. But, in the 1916 Ḥussein-McMahon correspondence, Britain had already promised an independent Arab state in Palestine to the Hashemite clan, for its assistance in opposing the Ottoman Empire.

Last year’s “Jordan is Palestine” conference in Jerusalem, which was ably spearheaded by prominent blogger Ted Belman (israpundit.org), featured many speakers who designated Jordan as the logical home for those Arabs living in Judea and Samaria who chose to live in “Palestine.” Why? Because Jordan is populated mostly by Palestinian Arabs who migrated from the western side of the Jordan River. Despite their numbers, they rank below the Bedouin minority who, up until today, have supported the Jordanian monarch, King Abdullah II. The king vehemently opposes additional Arab migration, recognizing that more Palestinian Arabs in Jordan will doom his reign, turning Jordan into a full Palestinian state.

Therefore, this possibility of voluntary population transfer is dependent on the Jordanian monarch either being deposed or abdicating. What are the chances that King Abdullah will flee Jordan in the near future? Atlantic Magazine’s Jeffrey Goldberg has written about this possibility:

“King Abdullah is not only a direct descendant of the Prophet Muhammad; he is the son, grandson, and great-grandson of Hashemite kings, and he is the great-great-grandson of the last sharif of Mecca. Abdication is not a realistic option. And yet, here he was, admitting that the thought had crossed his mind. ‘I just said that I was so depressed because of all the forces I was dealing with on the inside,’ the king said. ‘It wasn’t the outside—the outside, I understood (Muslim Brotherhood, etc.) It was inside… the secret police and the old guard.’

“[Goldberg] asked Abdullah this question: If 250,000 Jordanians were to surge into the streets, demanding his downfall, would he order his security services to shoot? Or would he abdicate? ‘My character is, I won’t shoot,’ the king said. ‘I don’t think we as Hashemites shoot. If you, as a monarch, have created a situation in which half the population rises up and wants you out, then you’ve done something wrong.’” [www.theatlantic.com/magazine/2013]

Expatriate Jordanian leader Mudar Zahran, who spoke at the “Jordan is Palestine” conference via Skype, is the leading proponent of a democratic Jordanian state, minus the Hashemites. He is an activist, researcher and political exile. “Born on 19 April 1973, Zahran is a Jordanian national opposition writer of Palestinian origin. Zahran’s parents were born in Jerusalem, and moved to Jordan during the period when the West Bank was under Jordanian control (1950–1967). Before seeking asylum in the UK, Zahran was serving as assistant policy coordinator at the United States Embassy in Amman.”

Zahran says that there are many roadblocks in the way to establishing a Palestinian Arab state in Jordan, mostly because the Arab zealots want “Palestine” to replace Israel. In contrast, Zahran wants to cooperate with Israel. Is Zahran for real? He says that there is enough substantial evidence to prove that he is actually able to influence the public opinion and movements of his people in Jordan. That, he explains, is why the King of Jordan recently tried Zahran in absentia in a military court and sentenced him to life in prison.

King Abdullah has been wrestling for years with a full-scale revolution, an intifada, which the media has not been reporting, Zahran says. “The Arab countries such as Saudi Arabia are not happy with the king of Jordan and his support for the Muslim Brotherhood, and that is why they are not providing him with money or other aid. I have inside sources that told me that the Americans gave up on him and told him, officially, that if he were to fall they would not support him. The only country that is helping the king stay in power now is Israel. That is why he hasn’t fallen.  If Israel withdraws its support, the king will get on the next plane to London and leave Jordan.”

Zahran thinks it’s about time Israelis consider alternative actions. We’re not asking Israelis to do anything, he says, we’re not asking them for their support. All we’re asking from Israel is to just let things proceed in Jordan and see what happens. The Israeli establishment should act as it did with former Egyptian strong man, Hosni Mubarak, who received no Western protection and was deposed during the Arab Spring. After all, how long will Israel continue to support the Hashemite regime, which is too expensive to maintain, asks Zahran. If, at first, a hostile Palestinian state is established in Jordan, even if it’s a problem on Israel’s borders, a Palestinian state in Judea and Samaria is a problem inside Israel. There is a huge difference.

Zahran envisions all of Judea and Samaria remaining under Israeli control. The seven large cities – Ramallah, Hebron, Jenin, Bethlehem, Jericho, Kalkilya, and Nablus which Israel does not want to rule – would continue to be autonomous, administered by Palestinian Arabs, but the security and the police force would remain coordinated with Israel. [This is similar to the Emirates Plan proposed by Israeli pundit Motti Kedar.]

According to Zahran, once Jordan rids itself of its extremely costly king, all the international aid money that flows to the Palestinians and Jordan will benefit the Palestinians themselves, instead of being stolen, as is the current situation. Palestinian Arabs would be able to migrate to a more prosperous Jordan, where affordable housing and model cities could be built with funds from the United Nations and donor countries formerly sent to the corrupt Palestinian Authority. Those Palestinians choosing to remain in Israel, in the large urban enclaves, would vote in the Jordanian elections.

The question is, will the Jordanian king give up or lose control of a country the Hashemites have ruled for a century? Zahran believes that King Abdullah will no longer be king, one way or another, “soon.” During President Obama’s term of office, he forestalled Abdullah’s departure, considering the king to be essential. But with the inauguration of President Trump, both Belman and Zahran believed ending Hashemite rule is doable; together they set about paving the way.

The plan to replace the British-established Hashemite rule over Jordan with “Palestinian rule over Jordan” is attractive, but perhaps visionary. What isn’t visionary is what Belman repeatedly opines: “The Palestine is Jordan Plan recognizes that nothing acceptable to Israel can be achieved by negotiating with King Abdullah or Mahmoud Abbas.”