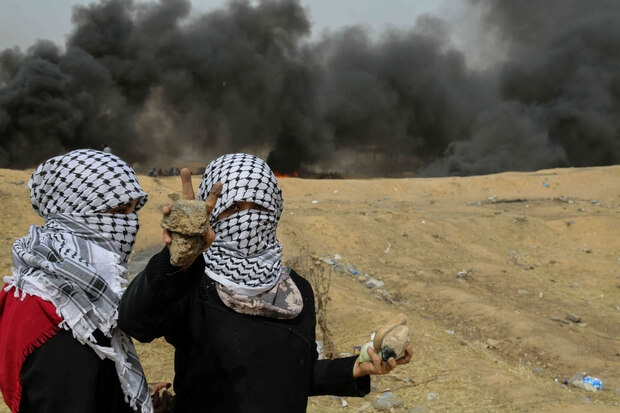 There’s not a day that goes by now when Palestinian Authority leader Mahmoud Abbas (Abu Mazen) doesn’t denounce through words and deeds the decline of his power, or rather, doesn’t express his agony while other events occupy the Palestinian scene and its eventual, albeit difficult, development.

During a meeting with Israeli peace activists in Ramallah, Abbas repudiated for the umpteenth time his rejection of any peace plan that comes from the United States—from hated U.S. President Donald Trump, who dared to recognize Jerusalem as Israel’s capital. And it’s understandable because this, more than anything, demonstrates his bankrupt policy. He hasn’t achieved any historical gains, instead insisting on refusing every agreement, every possibility for his people. He has tried to evoke a decent and pacifist image of himself abroad, managing with determination through the allocation of a great deal of money (aid coming from all corners of the world, including from you, dear reader) and the continuous push towards terrorism. He hasn’t left room open for a successor, and now he is besieged by his worst enemies.

In a recent statement, Abbas condemned the idea that the Palestinians and Jordan should form a confederation—an old topic that has never been confirmed by the Americans as part of a peace plan, but which could soon be on the horizon given that it is full of economic promises and public interest. It’s a reasonable aim, and therefore hated by the unreasoning chief of the Palestinian Authority. But he sees the American plan as part of the conspiracy—one of the many he constantly talks about—to destroy the Palestinian national cause.

This, however, is not the case. Here is a possible answer to Palestinian politics, his politics, inherited by the former chairman of the Palestine Liberation Organization Yasser Arafat. But he doesn’t want that. The ongoing declarations of terrorism have finally been laid bare through a series of moves by the Trump administration and its U.S. Ambassador to the United Nations Nikki Haley.

There are two main issues that have emerged in the last several days: the dialogue that hangs over Abbas’s head, with the bizarre use of Qatar as a bridge and, above all, Egypt, in order to neutralize Hamas and thus avoid another war in Gaza. It’s a far-sighted strategy that could limit deaths and injuries, and leave Jerusalem able to concentrate fully on a task that is dear to the entire Sunni world: to drive Iran, which currently besieges the whole Middle East, out of Syria.

For now, there is no war. Hamas certainly hasn’t become Zionist, but it was stopped. And Abbas remains very angry, declaring that the only one with the right to make an agreement with Israel is him, and that if Hamas wants to join him, it must hand over its territories and militias. Of course, that’s not going to happen, and Arab peace efforts move forwards, leaving him isolated as he continues to say no to Egypt, Qatar, Trump … and as usual, to Israel.

Abbas’s allegations just keep flying. They continue to do so following another momentous choice: The United States has decided to stop recognizing as refugees those Palestinians who for 70 years declared themselves to be so after the end of Israel’s 1948 War of Independence. Those children and grandchildren, increasingly numerous, have acquired not only all the rights, but also the status of Palestinian refugees (given only to them, among all other refugees in the world), which the very benevolent United Nations has bestowed upon them. While the definition of refugee is reviewed, the ad hoc organization of the United Nations Relief and Works Agency (UNRWA) will no longer receive the annual $300 million allocated by the United States. The so-called Palestinian refugees have, in the meantime, increased from 500,000 to 5 million. UNRWA not only impedes them from embarking on a life of normal learning and professional advancement, but has also, more than any other actor, made it its policy to prevent any solution to the Israeli-Palestinian conflict. UNRWA has prevented the relocation of refugees, and so they stat, forever classified as such, and their children stay, going to school in structures that adopt textbooks that are full of hate and incitement to commit terrorism, and associating with extreme groups that call for Israel’s destruction.

The deconstruction of this system cancels one of the main tenets of Abbas’s prevailing Palestinian policy, which is the so-called “right of return.” Every reasonable attempt at an agreement has sought to highlight the notion of inviting a tide of 5 million people into Israel—for all intents and purposes, bringing about the demise of the Jewish state.

From the moment he became head of the Palestinian Authority in 2005, Abbas failed to maneuver a single strategic victory, despite the fact that Israeli leaders (one after the other) have repeatedly invited him to the negotiating table for peace talks and offered him several possibilities. Now his tetragonal, angry wall has worsened. His legacy has been stained with blatantly anti-Semitic and Holocaust-revisionist statements, and his defense of salaries to imprisoned terrorists immediately after America cut funds to the P.A. over such payments leaves observers utterly speechless. He’s a leader who can’t lead, beaten by the changing political landscape and providing nothing but the wrong answers.