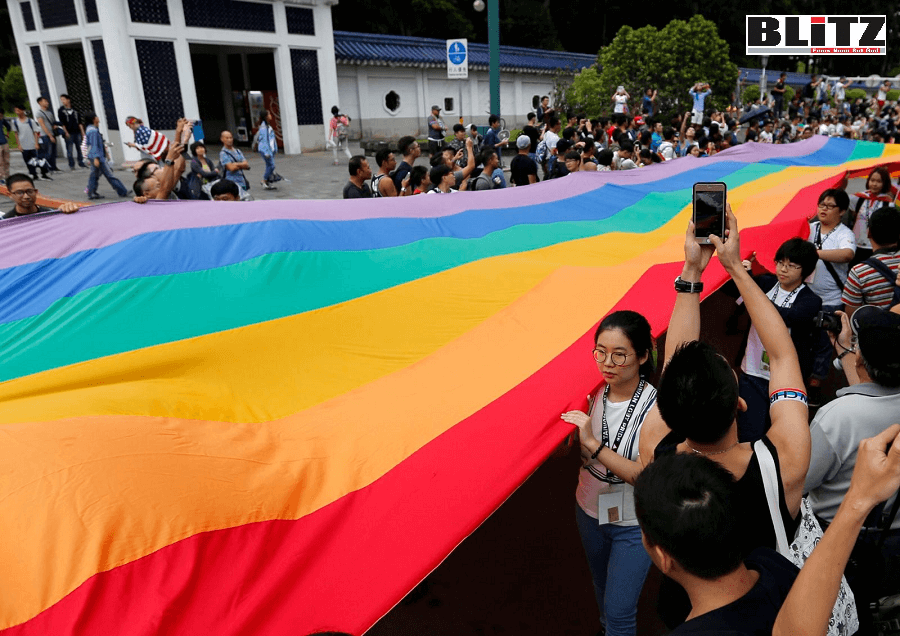 Sharia stipulates that homosexuality is punishable by death, and this punishment is still implemented in many Sharia states.

Days ago in Indonesia, two gay men pleaded for mercy as they were caned 77 times each, after neighbors reported them to the Islamic religious police. The Hadith directs harsh punishment against homosexuals:

“The Messenger of Allah (peace and blessings of Allah be upon him) said, “Whoever you find doing the action of the people of Loot, execute the one who does it and the one to whom it is done.” (Abu Dawud 4462)

“If a man who is not married is seized committing sodomy, he will be stoned to death.” (Abu Dawud 4462)

As much as denial persists, some Muslims who draw closer to the Sharia (which in Islam is considered to be divine law) become increasingly contemptuous of human rights. Another inconvenient truth is that Sharia’s abusive tenets are left out of every dialogue session in the West. Instead, Islam is presented as a “religion of peace” and “tolerance.”

According to January 25 report of the Human Rights Watch:

“Malaysia’s state and federal statutes that criminalize LGBT people are already out of bounds with regard to international law, and the government seems to be sinking even deeper in its disregard for human rights,” said Neela Ghoshal, associate LGBT rights director at Human Rights Watch. “Rather than enhancing penalties for actions that harm no one, the government should repeal such penalties.”

Malaysia’s state Sharia laws, which punish consensual same-sex relations as well as gender nonconformity, are among the many laws and policies in Malaysia that discriminate against LGBT people. Malaysia’s federal penal code covers most criminal acts in the entire country. State Sharia laws, enforced by state Islamic Religious Departments and tried in Sharia courts, are only applicable to Muslims, who make up about 60 percent of Malaysia’s population.

Before 2018, according to Malaysian human rights activists, Malaysian courts had never actually imposed caning sentences, which are a form of torture under international law, for same-sex conduct. But in September 2018, Terengganu state carried out a caning sentence against two women accused of attempted same-sex relations. And in November 2019, the Selangor Sharia court sentenced five men to fines, imprisonment, and caning, while others who pled not guilty are awaiting trial.

The Selangor case spurred a constitutional challenge, pending before the Federal Court, in which the petitioner – one of the men awaiting trial – argues that the duplicative state and federal prohibitions on same-sex relations violate federal law. A second legal challenge, filed before Selangor’s High Court but stayed by the court while the federal case is pending, contends that the criminalization of consensual same-sex relations violates constitutional rights, including the right to equality before the law.

State religious departments in Malaysia have a history of subjecting trans women to arbitrary arrest, assault, extortion, and violations of their privacy rights, Human Rights Watch said. An appeals court ruled in 2014 that laws against “cross-dressing” in Negeri Sembilan state were unconstitutional, but in 2015 that ruling was reversed on a technicality.

In July 2020, the religious affairs minister, Zulkifli Mohamad, published a Facebook post giving “full license” to Federal Territory Islamic Department (JAWI) officers to arrest transgender people and “counsel” or “educate” them so that they “return to the right path.” Recent abuses against trans women include an October 2020 raid on a birthday party in Kedah, during which state religious officials arrested 30 trans women, and the January 2021 arrest of Nur Sajat, a cosmetics entrepreneur and social media personality, on charges of “insulting Islam” by dressing in clothing typically associated with women at a religious event.

Human Rights Watch has documented that successive governments in Malaysia have employed anti-LGBT rhetoric as a political tool, calling on LGBT people to “change” their gender identity or sexual orientation to “return to the right path” or risk retribution. Officials have attempted ti silence alternative narratives that advance LGBT people’s rights and acknowledge their humanity. For instance, in December, the Home Ministry banned a book entitled “Gay is OK! A Christian Perspective,” and denounced homosexuality as “clearly forbidden and contrary to all religious teachings.”

LGBT people in Malaysia told Human Rights Watch and the Malaysian trans rights group Justice for Sisters that hostile government rhetoric contributes to violence against LGBT people by members of the public.

Malaysia’s national human rights institution, SUHAKAM, which has also documented violence and discrimination against trans people in Malaysia, condemned the proposal to amend Act 355. It said that the government should “adopt a more compassionate approach by respecting human rights for all.”

On January 21, Prime Minister Muhyiddin, who in a previous role as deputy prime minister said that Malaysia “does not recognize LGBT rights,” surprised Malaysian human rights activists by expressing support for laws that prohibit hate speech, including on grounds of sexual orientation, in prepared remarks at an Association of Southeast Asian Nations (ASEAN) forum. Activists highlighted the disconnect given that Muhyiddin’s own government advocates persecution of LGBT people.

“It is the height of hypocrisy that on the one hand, Prime Minister Muhyiddin Yassin urges ASEAN countries to enact laws against hate speech based on sexual orientation, and on the other hand his cabinet member calls for amending laws to further criminalize LGBT persons in Malaysia,” said Chong Yee Shan of Diversity Malaysia. “The prime minister should walk the talk and take meaningful steps to address hate speech while ending criminalization of LGBT persons in Malaysia.”