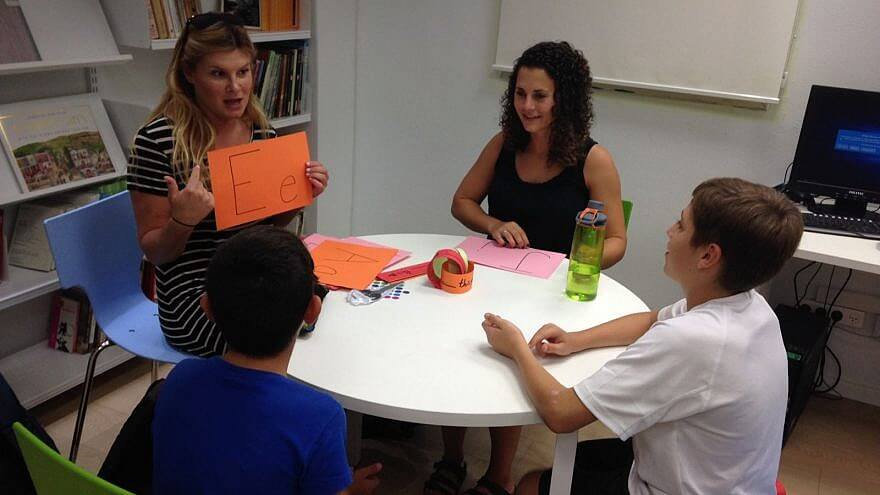 The program, Masa Israel Teaching Fellows (MITF), is a 10-month fellowship that offers college students from English-speaking countries, mainly North America, the opportunity to teach English as aides to current English teachers in public schools throughout Israel. Participants, also known as fellows, develop skills as educators and leaders while impacting the lives of Israeli students, who are mostly in elementary school.

Two or three fellows are placed in each school, where they volunteer 25 to 30 hours per week, taking small groups of students out of their regular English classes to give them personal attention and work with them on important concepts like vocabulary, grammar, reading comprehension and spelling. The fellows partake in Hebrew classes two days per week throughout the year, live in the city where they work, and are also involved in a community volunteer project.

MITF, which runs from late August to June each year, began in 2011, and is a partnership of Masa Israel Journey and Israel’s Ministry of Education. It was created to address the achievement gap in Israel’s public-education system.

In 2013, Israel’s Central Bureau of Statistics estimated that the country will be short 5,300 English teachers by 2019, according to The Jerusalem Post. That same year, a poll revealed that only 18 percent of English teachers in Israel spoke the language at the same level as a native-speaker, The Times of Israel reported.

The need for English speakers is ‘huge’

Liran Avisar Ben-Horin, CEO of Masa Israel Journey, echoed the same sentiments about there not being enough native English-speaking teachers in Israel, adding that “sometimes, you’ll even have a history teacher who is teaching English because it’s needed, and they don’t have enough native English teachers.”

MITF works in cities where students are in some ways underprivileged, she explained. Fellows lend a hand in areas such as Ramleh—a city in central Israel where English is the third language because of the area’s Arab-Israeli population—or cities with high immigrate populations where again, English is the third language for the students, resulting in poor knowledge of the language.

About the students that MITF helps, Avisar Ben-Horin said “one of the biggest challenges is they don’t have self-confidence. They have some kind of wall that you have to break. They are afraid to speak [English]. The Ministry [of Education] was really looking how to encourage young students in the periphery to break those walls, to speak English, and to feel more freely and confident about the language. … It’s unbelievable how those kids feel about English after the year they spend with a fellow.”

She added that considering Israel’s expansive and growing international business market, the need for English speakers in the county is “huge.”

After school, the fellows will even go to a student’s home to continue working with them. The majority of fellows are not fluent in Hebrew before joining MITF, and that sometimes makes the Israeli students more comfortable in speaking English with them: the students correct the Hebrew of the fellows, and the fellows correct the English of the students.

Fellows and Israeli students bond during the 10 months they spend together, often developing close relationships. The fellows become like “heroes,” or big brothers and big sisters to the students, according to Avisar Ben-Horin, and are greeted like “rock stars” when they walk into the school.

“You have 15 students running and trying to give you hugs. It’s very sweet,” said Caroline Spikner, 23, a current participant of MITF and a recent graduate of Northwestern University in Evanston, Ill., where she studied film and dance. “They are definitely really enjoying having us there, and I think the fact that we don’t speak Hebrew for the most part really forces them to work on their English as much as possible because they really do wanna try to communicate with us, even if that means they’re just gonna speak Hebrew to us until we understand it. I’m very excited to see how they are at the end of the year.”

Spikner works with second- through sixth-graders in a modern Orthodox school in Beersheva, where she either helps support the host teacher within the classroom or works with small groups of students outside of class. Describing the level of English knowledge that her students started off with at the beginning of the school year, Spikner said, “They’re probably about similar to within the [United] States regarding how much Spanish you actually know by the time you graduate. It’s a similar way of teaching, in where you have vocabulary and you learn specific things, but it’s not necessarily conversational. If you ask a kid how you say ‘apple’ in English or what it means, they absolutely know, but that doesn’t necessarily mean that when you say, ‘Good morning, how are you?’ they can respond.”

So far, Spikner has said the program has taught a lot of “thinking on my feet” skills, and how to hold the attention of a group and make sure they are learning, but at the same time have fun. “The more time I spend with the students, the more inspired I am to consider ways of having education involved in what I do next,” she said.

Matthew Callman, who participated in the program in the 2014-15 school year, said the Israeli students he worked with were excited and “really present” when it was their time to be with the fellows. They tried their best to speak English, “saw it as a privilege” to talk with the fellows and were intrigued to learn from them, even if it meant just having a conversation about what life is like in America.

MITF taught Callman valuable leadership skills by challenging him to step outside of his comfort zone, speaking in public and running programs. The 26-year-old also said it strengthened his Jewish identity and connection to Israel. “I made sure that I wasn’t stuck in the English-speaking bubble. I went out of my way to try to make friends and to build friendships with native Israelis—to talk to them and learn what it’s like to be an Israeli.”

“I really couldn’t have pictured a better year to have the opportunity to grow personally, professionally and Jewishly,” he added.

Developing a relationship with Israel

Before starting work in the schools, fellows engage in an orientation comprised of seminars and discussions about educational methods, created and led by Israel’s Ministry of Education, to help build their teaching skills and prepare them for interactions with the students.

MITF began seven years ago with around 15 fellows, and now has 250 college graduates working with 160 public schools across Israel, according to Avisar Ben-Horin. Municipalities in the program include Eilat, Bat Yam, Rehovot, Ashdod, Netanya, Petach Tikvah, Rishon Letzion, Beit She’an, Migdal Ha’Emek, Nazareth, Ramle and the Bedouin town of Rahat. MITF is in discussions with the Ministry of Education to grow next year to 350 participants working with 200 to 250 schools. It also offers fellows the opportunity to earn a certification to teach English in Israel, and last year the fellowship began a new track for certified teachers from English-speaking countries who will lead their own classrooms in Israel with English as a second-language curriculum.

Avisar Ben-Horin said motivation for learning in general is growing in schools where fellows are placed, creating a “halo effect” and a “circle of impact” on many levels, even among the Israeli teachers and American fellows, who become friends and learn from each other.

She said that Masa Israel Journeys started the MITF program hoping to offer young Jews from English-speaking countries “an authentic, unmediated experience” where they can interact with the Israeli society in a meaningful way, build bonds with Israelis, and strengthen their Jewish identity and connection to Israel.

Some past participants of the MITF program have married Israelis and are currently living near the school they taught in during their stint in Israel, while others come often to visit former students at their homes. Some past fellows have even made creative efforts that connect the communities in Israel with those in the United States. Among last year’s fellows was one college graduate who organized a fundraiser in her community in Miami and used the money to open an English-language library in the Israeli school she volunteered in.

“It’s unbelievable to see those projects that they initiate,” said Avisar Ben-Horin. “They make it happen and for us. That’s what we’re hoping for at the end of the day: to build young leaders who care about Israel and care about their communities, and know how to bring those together. So while it’s about achieving the very important impact of closing gaps within certain areas in the Israeli society, for us, it’s also a way to grow those participants to be leaders that care about their communities, the State of Israel and its people. “