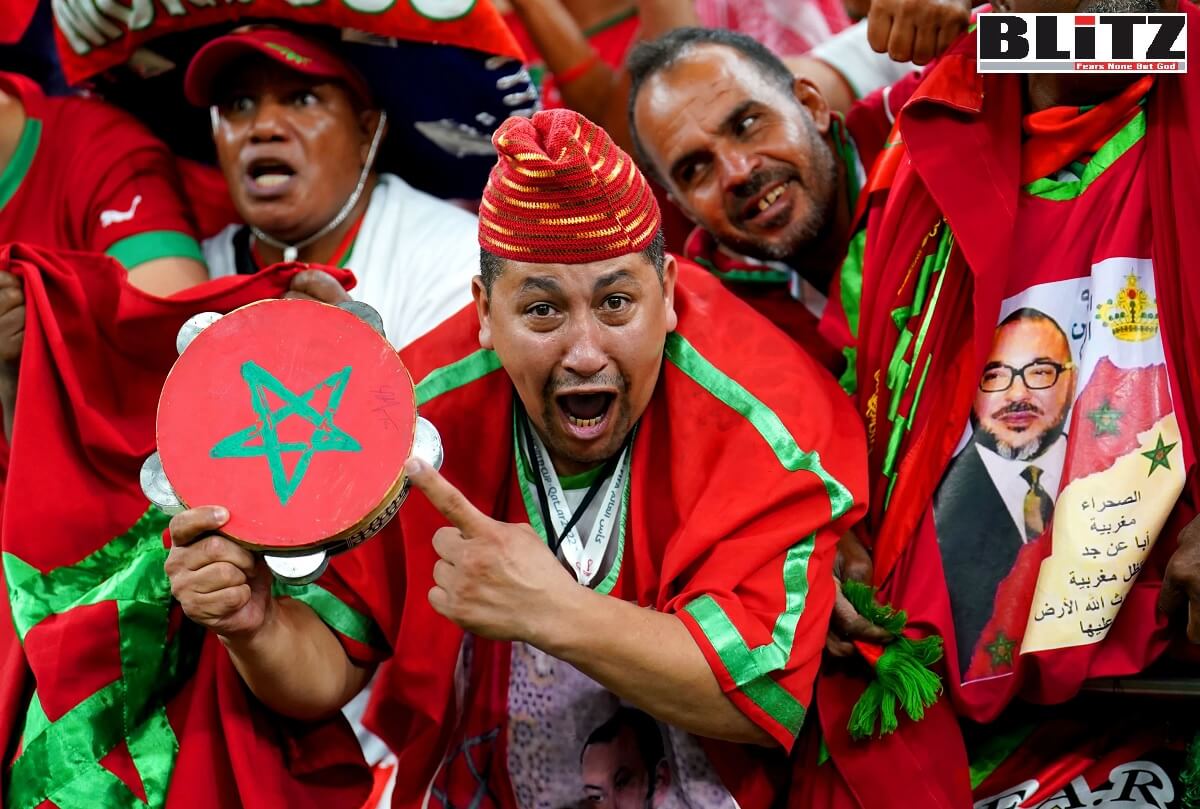 So, the Moroccan dream is over after their defeat to Argentina in the semifinals of the football World Cup hosted by the terror funding, homophobic, migrant killing, slave operating, EU bribing, corrupt nation of Qatar.

The footballing success of Morocco has created a frenzy of support for the North African nation throughout the Arab world. Related to this success is the ‘Palestinian’ issue which the Moroccan team and some of their fans have exposed and politicized despite FIFA’s ban on political protests. Will there be punishment from the football authorities, don’t hold your breath. Only those teams who were going to wear LGBT regalia were warned of pending doom should they have proceeded with such political protests.

Pro Palestinians and Jew haters on social media were orgasmic at the public relations opportunities being presented promoting the ‘Palestinian’ cause.

In reality not all in the Islamic Arab world were content with the Moroccan success and linking this to all things Palestinian.

Morocco has recently established full diplomatic and commercial relations with Israel as part of the Abraham Accords and this has proved to be of huge benefit to both countries economically.  A group of Israeli entrepreneurs and influencers with tens of millions of social media followers visited Morocco simultaneously to the football event. Their visit was a huge success.

Tourism between the two nations has boomed given the thousands of Jews globally with Moroccan roots and Israeli defense, medical, agricultural and technology equipment sales are on a spiraling upward trajectory. There are daily flights between the two.

That is the unpalatable reality for Israel’s enemies and the enemies of peace and it is these realities are which true to form are ignored by those party’s intent on hate and confrontation.

Also ignored have been the riots in European cities such as Paris and Brussels creating infrastructure damage, injured police and civilians and an unparalleled crime wave perpetrated by the Moroccan supporting morons.

Deaths of civilians are currently being reported in Montpelier due to the French Moroccan rivalry. And also ignored are the Sarhawis and the Polisario Front. Who are they you ask?

Consistent with the selective reporting of mainstream media, Morocco have illegally annexed a huge portion of land, over one thousand times larger than the Palestinian territory the world is so focused on, from the indigenous population of the Western Sahara.

Thousands of Arabs have died during this decades long conflict formerly involving Spain and Mauritania but now only Morocco and those living in the geography. The total numbers of deaths are disputed but the estimates range from fifteen thousand to thirty thousand civilians over forty years. To all our readers cast your minds back and try to remember if those news channels you are watching have ever reported on this Afro Islamic war.

Mainstream media has over the decades rarely if ever devoted any news coverage to this dispute costing so many lives. Such people are excrement on the shoes of the global news networks and unworthy of reporting. Algeria and Libya have funded the anti-Moroccan separatists and the Moroccan Air Force have bombed civilian refugee camps with white phosphorus, a war crime. All this of course has been continuously ignored by mainstream media. Algeria and Morocco have little if any diplomatic relations and the United Nations, better known as The Theatre of The Absurd are disinterested in the conflict. The occasional peace negotiations have failed because there has never been a serious commitment to ending the conflict.

The question is – will the success of Morocco push the Saharwis to expose their cause to the global audience currently transfixed on their oppressors. The opportunity is obvious and never before has there been such positive publicity on the North African nation state of Morocco. Will the Western Saharan separatists take advantage of this unique public relations gift and attempt to negate the positive publicity currently being enjoyed by Morocco?

The UN does not recognize Moroccan claims over the territory but is immersed in inertia about the dispute where all UN resources are concentrated on the demonization of Israel. According to the waffle of the United Nations, Western Sahara is a ‘non self-governing territory’.  What on earth does that mean? With a population of just under one million and the main city being Laayoune, the anti-Moroccan feeling was displayed in abundance during the world cup. As at the time of writing there has been no significant response from those taking a militant stance on independence.

Does it matter? Probably not as the global elite will do as they have done for half a century and totally ignore the ongoing tragedy of the Western Sahara.