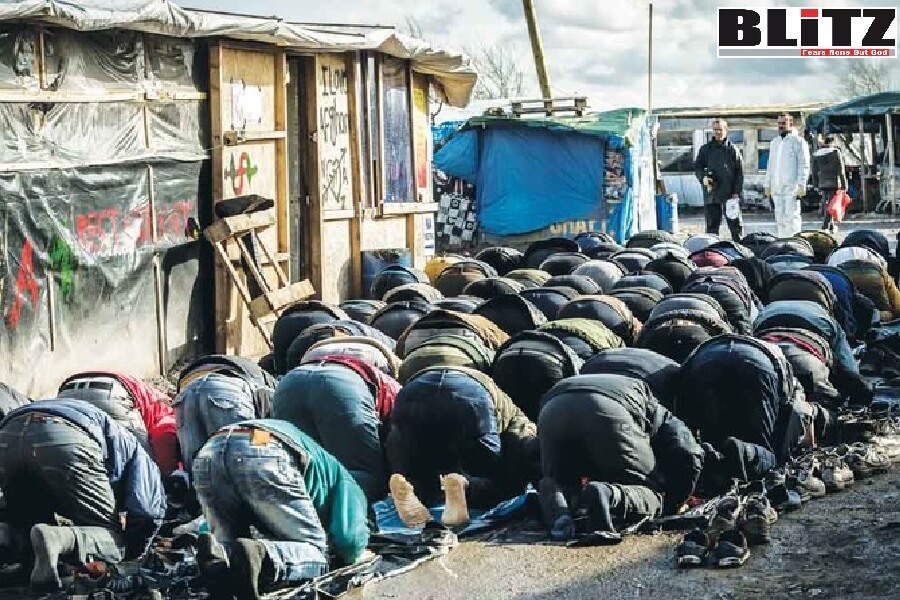 Muslim migrants in the Western nations consider non-Muslims as “infidels” and “enemies of Allah”. Gradually they are imposing sharia rule in most of the Western countries, including the United Kingdom as part of the dream of bringing those nations under the “flag of Islamic Caliphate”. Meaning, they are advancing with the dangerous agenda of spreading the poisonous seeds of Caliphate and Sharia in the Western nations. As there is no or very little awareness amongst the majority of the populace of these countries, imams in the mosques and Islamic centers are issuing sermons during Friday prayers calling upon the Muslims to wage jihad and cause maximum damage to “infidels”. In Britain, Muslims have been imposing Sharia rule in several parts in London, in particular thus forcing non-Muslim residents of complying with this Islamist practice. There also is massive rise in Sharia-compliance financial establishments and insurance companies. According to media reports, Sharia finance is gradually becoming major competitor and challenger to regular banking and insurance sectors.

While radical Islam and jihadism is on rise in the Western countries, recently a controversial fatwa [edict] published on April 12, 2022 by Egypt’s privately-owned Arabic daily newspaper Al-Masry Al-Youm that calls for a ban on serving food before iftar time [sun set] during the Islamic month of Ramadan to “infidels” has sent a shockwaves across the country.

The fatwa was released by preacher Mohamed Saleh El-Munajjid, a Syrian national of Palestinian origin who lives in Saudi Arabia, the hotbed of Wahhabism, an extremist interpretation of Islam.

In Islam, a Muslim is allowed not to fast during Ramadan for several reasons, including if they are travelling long distances, during pregnancy, breastfeeding, chronic illnesses, menstruation and postpartum hemorrhage.

El-Munajid’s fatwa set off an uproar in Egypt where about 10% of its population follows Christianity, and many believe that the extremist preacher was referring to them as “infidel”.

Meanwhile, the Supreme Council for Media Regulation summoned Al-Masry Al-Youm’s legal advisor for questioning over the published fatwa. The council, an independent entity known for being loyal to the current regime, is tasked with monitoring local media performance.

Later in the day, the newspaper published an apology and a retraction on its website. In the statement, the Egyptian newspaper said: “Al-Masry Al-Youm institution owes its readers a sincere apology for the….bizarre fatwa run by one of the journalists…[newspapers] in a clear violation [of the paper’s editorial policy] without checking…The fatwa labelled whoever has a different religion as being an ‘infidel’, a description never used or approved by Al-Masry Al-Youm”.

The public outrage over the published fatwa comes after another controversy during the second week of April 2022 in which a Coptic Christian woman named Selvia Botros posted on her Facebook page about a negative experience she had with her children at a famous local Koshary restaurant in Cairo.

Botos wrote that the waiter reprimanded her after her child ate a small amount of food before iftar time, under the pretext that these were “the rules of the place”, even though they told him that they were not fasting.

“Is fasting an obligation even to us as Christians?”, she wrote.

Although fasting is not an obligation to any non-Muslims, radical Muslims around the world, including the Muslim migrants in the Western nations are already feeling enthusiastic in becoming louder with the demand of banning serving of food in any restaurant or food court during the daytime of Ramadan. Unless rise and spread of radical Islam is immediately countered and Muslim migrants in the Western nations are not brought under strict surveillance, maximum within a decade, every non-Muslim in those countries, including Jews and Christians may face extreme cruelty and thuggish behavior from the Muslim migrants in particular.