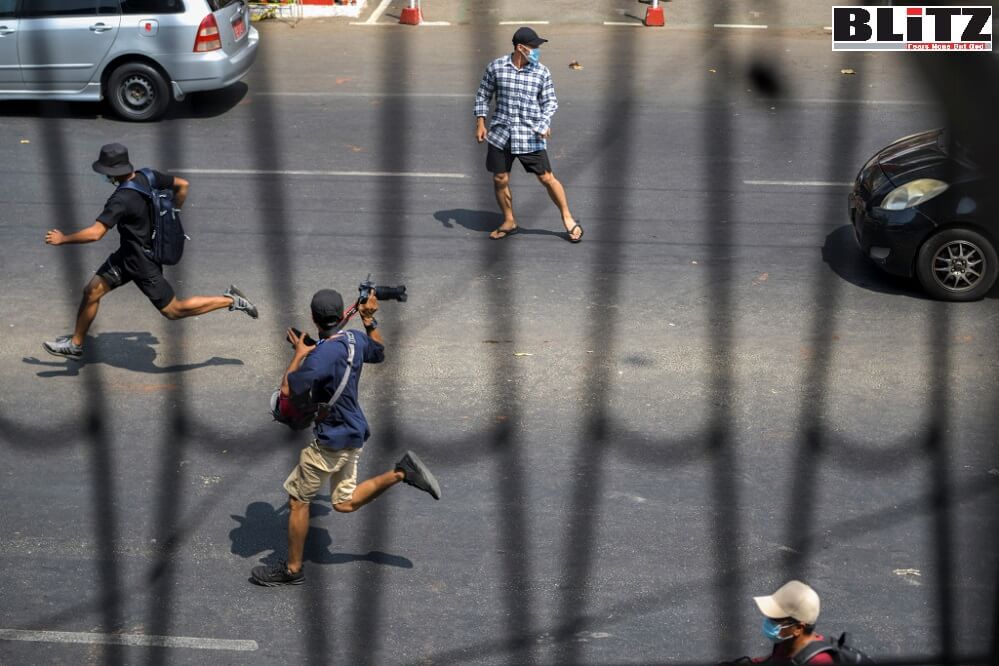 Myanmar’s junta has effectively criminalized independent journalism, arresting and charging journalists, closing news outlets, restricting access for international reporters, and driving journalists underground or into exile. Within a few months of the February military coup, the country has become one of the world’s worst jailers of journalists. A CPJ special report by Shawn W. Crispin

When Myanmar security officials arrested journalist Kyaw Myat Hlaing for his news coverage of anti-military protests in his hometown of Myeik, they shot their firearms into his house before launching their raid.

Video footage of the attack has been viewed over 2.5 million times on Facebook, where Kyaw Myat Hlaing, a video reporter with the Democratic Voice of Burma (DVB), livestreamed the late-night assault that resulted in his March 1 arrest.

His arrest is emblematic of the crackdown on the press since Myanmar’s military deposed de facto democratic leader Aung San Suu Kyi in a February 1 coup and rounded up dozens of members of the media. Myanmar has quickly gone from imprisoning a single reporter to ranking as one of the world’s worst jailers of journalists, the Committee to Protect Journalists found in a special mid-year survey.

At least 32 journalists were imprisoned in Myanmar because of their work as of July 1.

That total is down from at least 45 journalists jailed on June 27; on the last day of June, authorities released more than 2,000 detainees, including 13 journalists, according to news reports and the Assistance Association of Political Prisoners (AAPP), a local rights group. It wasn’t immediately clear if any of those released still faced charges.

On December 1, 2020, when CPJ conducted its annual global census of imprisoned journalists worldwide, Myanmar reported only one journalist in prison. China (48), Turkey (47), Saudi Arabia (26) and Egypt (26) were the worst jailers worldwide at that time.

Meanwhile, Kyaw Myat Hlaing has been sentenced to three years in prison under Article 505(a) of Myanmar’s penal code, a broad and vaguely worded provision leveled against many of the reporters languishing behind bars. At least three reporters have been sentenced to prison terms under Article 505(a) since the coup; the rest were awaiting trial or being held on unclear charges. Myanmar held over 5,100 political prisoners as of July 1, according to the AAPP.

Penal code amendments implemented two weeks after the coup made it easier to prosecute and jail journalists through the broadening of Article 505(a) to include penalties for spreading “false news.” The provision now criminalizes “any attempt to cause fear, spread false news or agitate directly or indirectly a criminal offense against a government employee” or that “causes their hatred, disobedience, or disloyalty toward the military and the government.” The amendments also increased maximum prison sentences under the law from two to three years.

The breadth of the new wording prompted CPJ to classify Article 505(a) as both an anti-state charge and a “false news” charge — two types of legal accusations tracked since CPJ first collected global prison data in 1992. The number of journalists worldwide jailed on false news charges has steadily increased in recent years, and CPJ has documented the proliferation of new laws that criminalize it.

In Myanmar, the use of 505(a) since the coup has effectively made independent journalism a crime under the junta’s emergency rule, which military authorities have said will remain in place for at least one year while authorities conduct investigations into Suu Kyi and her ousted National League for Democracy (NLD) government’s alleged electoral fraud.

Journalists and editors familiar with recent trial proceedings told CPJ that prosecutors and judges are under military pressure to rule against journalists on security rather than media laws, including the 2014 News Media Law, which protects press freedoms and bars custodial penalties for media-related offenses.

“We don’t accept the detention and sentencing of any of our DVB reporters or any other journalists being detained or sentenced in Burma (Myanmar),” said Aye Chan Naing, editor-in-chief of the Democratic Voice of Burma, an independent local media outlet. “Their cases are being decided by kangaroo courts,” he said. Two DVB journalists have been sentenced to prison terms while another is in detention awaiting trial.

The number of jailed journalists in Myanmar could well be much higher than CPJ’s count, considering many news organizations are reluctant to identify detained freelancers, stringers, and other non-staff reporters they rely on for news, photographs, and video, due to concerns they could face more severe penalties if they are found to be associated with their news outlets. This is especially the case in states that have been restive with ethnic conflict, CPJ found.

Several editors contacted by CPJ, many of them in hiding to avoid potential arrest, requested that detained reporters not be identified as their contributors, including news organizations that have had their operating licenses revoked by the junta in the wake of the coup.

Myanmar’s post-coup assault on the free press marks a drastic reversal of liberalizing policies implemented beginning in 2012 that freed journalists from prison, ended pre-publication censorship, and allowed independent media to take root across the country, including in ethnic areas where such reporting was previously banned.

Then as now, CPJ’s research shows, hell is a Myanmar prison. Journalists and editors who communicated with CPJ say their detained reporters have been subjected to abuse and torture by interrogating officers while in detention. Authorities did not respond to CPJ’s emailed requests for comment on these allegations.

Nathan Maung, editor-in-chief of Kamayut Media, told CPJ in an interview that he and his colleague Hanthar Nyien were blindfolded for several days, physically beaten, and deprived of food and water while being held at the Yay Kyi Ai military interrogation center in Yangon.

Maung alleged that Nyein was burned with a lit cigarette and made to kneel on an ice block while handcuffed during interrogations. Authorities attempted to rape him to force him to reveal his phone password, which he finally relinquished, according to Maung.

Maung, a U.S. citizen, was released in June and deported to the United States; Nyein, a Myanmar national, is still being held on Article 505(a) and another criminal charge related to his journalism.

Chan Bu, a jailed journalist with independent The 74 Media group, was likewise tortured during seven days of interrogations in mid-May at a Kachin State military command facility, according to the outlet’s editor Htoi Awng, who communicated with CPJ by messaging app.

Htoi Awng said authorities physically beat Chan Bu, deprived her of food and sleep, and threatened to kill her if she didn’t answer their questions about her news organization and reporting. She now faces charges under Article 505(a). The 74 Media has since moved its operations from a government to rebel-controlled area in Kachin State to avoid military reprisals, Htoi Awng said.

Journalists also faced harassment and prosecution under the rule of Suu Kyi, who defended the lengthy imprisonment on trumped-up charges of two Reuters reporters for their reporting on human rights abuses by the military. But independent media operated in the open.

Now, the threat of arrest and imprisonment has driven many news organizations to close their offices and report from underground to avoid reprisals, editors and journalists told CPJ, many using messaging apps and communicating only late at night when they believe monitoring authorities are off duty.

Authorities have imposed rolling restrictions on Internet access since the coup, making it difficult for reporters to send news, images, and videos of their protest coverage. Authorities have said the restrictions are necessary to prevent chaos and violence, which they claim has been provoked online.

Military authorities have revoked at least eight news organizations’ licenses for unstated reasons since the coup, according to Reporting ASEAN, an independent regional news outlet and discussion portal. Reporters who continue to report from underground for these banned outlets risk especially severe punishments if discovered by authorities.

Dozens of journalists are in hiding from arrest warrants issued in retaliation against their news reporting activities, according to information compiled by AAPP. They include at least five reporters from the Shan State-based Tachiliek News Agency, which has been banned by the junta and whose reporter Kyaw Zin Hein is in detention, according to Cherry Htike, an editor at the news outlet who is in hiding.

“Grassroots media like Tachiliek News Agency have little choice but to stop operations or risk arrests and jailing,” Htike said via a messaging app. “The fact that the military junta is jailing journalists means it’s afraid of a free press.”

An unknown number of others have fled into exile to avoid arrest and persecution. In March, three DVB reporters were arrested in neighboring Thailand after fleeing persecution in Myanmar. They were convicted of immigration offenses by a Thai court and deported to an unnamed third country.

While countries like Thailand and India allowed exile media groups to operate from their territory during the previous era of military dictatorship in Myanmar, their current governments are less likely to make such allowances for sanctuary-seeking journalists due to their improved diplomatic and economic ties with Myanmar.

Military spokespeople have denied that press freedom has come under threat since the coup. Army spokesman and junta press team head Brigadier General Zaw Min Tun said at a March 23 news conference that the military “respects and values media freedom.”

That wasn’t apparent, however, in a Ministry of Information statement released just weeks after the coup that warned some media were using “incorrect words” such as “coup,” “junta,” and “regime” to refer to the military’s takeover, usage it claimed violated publishing laws and may “arouse civil unrest.” On June 28, the ministry doubled down on the warning to foreign media, saying that “action will be taken” against foreign news outlets that “apply wrong usages, quote and exaggerate fake news and disseminate false information.”

Reporters with foreign news organizations have been targeted with arrest, with Associated Press and BBC reporters temporarily detained and later released without charge. One BBC reporter who declined to be named told CPJ that the BBC’s Yangon bureau, which is staffed solely with Myanmar nationals, now operates in a “low-key way” to avoid further reprisals.

Few foreign journalists are being allowed access to the country, and those who do gain entry are closely monitored. In April, authorities detained a handful of residents after they had contact with a CNN reporter, news reports said.

At least three foreign reporters have been detained and deported since the coup. U.S. national Danny Fenster, who serves as managing editor at the local Frontier Myanmar, was detained at Yangon airport in May and now faces charges under Article 505(a) for his news coverage; he was the only international journalist still jailed at the time of CPJ’s census.

Journalists and editors told CPJ they believe the threats, arrests and imprisonments are the beginning of a campaign to roll back press freedom gains achieved under quasi-civilian and democratic governments, and restore the harsh media censorship seen under previous authoritarian military regimes.

“The military regime thinks they can hide their wrongdoing by threatening and arresting independent journalists,” said DVB’s Aye Chan Naing, whose news group is world renowned for its dogged underground reporting under previous military regimes. “They never succeeded in the past decades and they never will.”