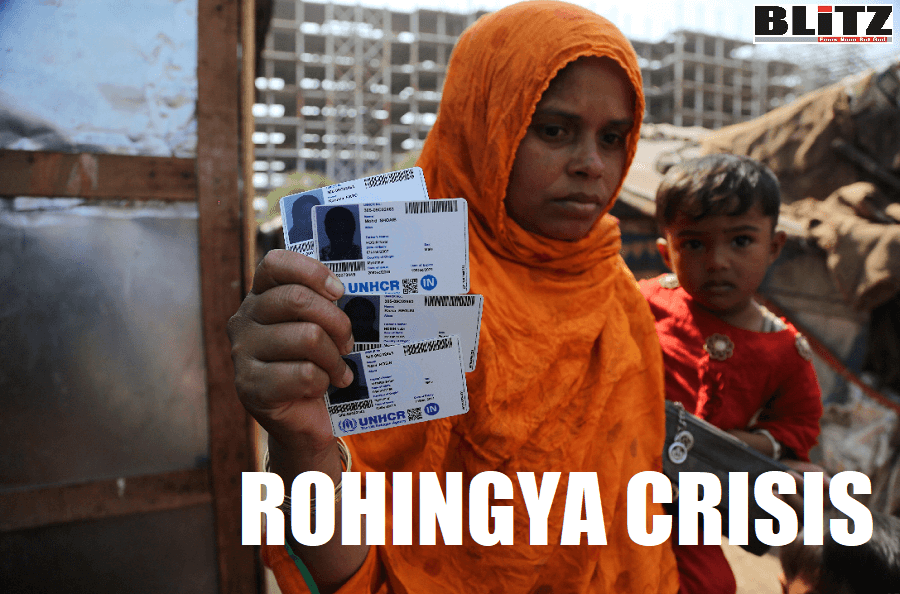 India’s one of the oldest and most widely circulated periodical The Organiser has published a report by Ravinuthala Shashidhar, spokesperson of VHS, Telangana, where the writer claimed, after Indian government’s drive to undertake a verification drive of Myanmar’s Rohingyas living in Jammu illegally, the spotlight is on Hyderabad which has emerged as a major hub of illegal Rohingya infiltrators in the country. It is estimated that there are about 10,000 Rohingyas in Hyderabad.

Shashidhar claimed, Rohingyas in India are supported by radical Islamic political outfit All India Majlis-e-Ittehadul Muslimeen (AIMIM) led by Asaduddin Owaisi, who also is a member of the Lok Sabha.

The VHS spokesperson said, majority of the Rohingyas are involved into various forms of crimes, including dealing in drugs.

It is learnt from Organiser article that, AIMIM corporators and leaders have been providing all kinds of facilities for Rohingyas, including Aadhar cards each ration cards and passports [through illegal means]. Rohingyas have set up an exclusive television channel for themselves and sports teams. The State Home Minister personally visited one of the Rohingya settlements and distributed ration items to them. Acknowledging complaints from local activists about Rohingyas’ rising threat, the Prime Minister’s Office sought a report from the Telangana government. In response to that report the State Government claimed that it was not aware of the whereabouts of Rohingyas, though one of the Ministers had distributed ration items to the infiltrators.

The Rohingya-run television channel in India has been regularly running propaganda contents against Bangladesh with the false allegation of pushing the Rohingya refugees into a “risky island” [Bhashanchar], despite the fact, the shelter created by the Bangladesh government at Bhashanchar has been highly praised by several nations and international organizations. This Rohingya television channel also is encouraging them in waging ‘jihad’ against Myanmar and “non-Muslim nations”. It is learnt from credible sources that Turkey, Qatar and Pakistan [also Iran] are giving provocation and funding to Rohingyas.

In his article, Ravinuthala Shashidhar also said: It has been found that several youths in the camps have direct links with Islamist terror outfits such as the Jamaat-ul Mujahideen Bangladesh, Popular Front of India and the Lashkar-e-Tayyeba. Intelligence agencies have warned that several youths have been recruited for terror activities from camps in Assam, Jammu and Hyderabad by Pakistan’s spy agency ISI.

It has come to the light that Rohingya youths in Hyderabad were indulging in many criminal activities, including human trafficking. The police refuse to take action despite complaints from local residents. The Rohingyas have also been mobilizing funds through hawala channels and other criminal activities.

Another major threat that intelligence agencies have pointed out was that majority of the Rohingya settlements are close to security and defence installations and establishments. In Hyderabad, there is a settlement in Kanchanbagh near Hafeezbaba nagar, which is home to about 1000 Rohingyas. Hafeezababa Nagar houses several defence laboratories. Another settlement is in Balapur. After the intelligence agencies alerted the Government of the threat, the Defence have stepped up security around these establishments. What annoys the Defence establishment is the lackadaisical attitude of the State police.

Islamist Organizations like Popular Front of India and SDPI have also been taking up the cause of Rohingyas. With the help of certain dubious civil society organizations and media, these organizations managed to build a narrative that Rohingyas are a persecuted minority. But these organizations are silent about the terror cases registered against the Rohingyas and the security threat they pose to local residents due to their involvement in criminal cases. The Rohingyas have managed to register themselves as voters and these Islamist political parties find in them committed voters.

Several urban Maoist groups have also established rapport with Rohingyas. Although the State Police force is aware of their links, it has not cared to file charge-sheets in several cases.

Unresolved Rohingya refugee crisis can ultimately turn into a major security threat to Bangladesh, India, Nepal and Sri Lanka in particular, while the seeds of radical Islam and jihad may continue to expand within most of the Asian nations, such as Thailand, Singapore, Malaysia, Indonesia, Philippines, Japan, Korea, and even China. On the other hand, growing size of Rohingya refugees in the Western nations may also result in massive security threat in the near future.

While Rohingya refugee issue has also become a massive burden to Bangladesh, and it may also emerge as a major problem for several South Asian nations in particular, there are reports of hundreds of non-Rohingyas entering various countries, particularly Germany, France, Greece, Italy, Sweden, Denmark, Switzerland, Norway, Belgium, Poland, Britain, Australia, and even Canada and the United States and seeking asylum with false claim of being Rohingyas. In most cases, immigration authorities of these countries are reportedly failing in unearthing the real identities of the fake Rohingyas. Taking undue advantage of such weak-vetting process, unknown number of fake Rohingyas have already entered the Western nations and are awaiting approval of their asylum process.

It is also alleged that the United Nations High Commission for Refugees (UNHCR) is also been regularly fooled by the fake Rohingyas. UNHCR is a UN agency mandated to aid and protect refugees [not fake refugees] and protect refugees, forcibly displaced communities, and stateless people, and to assist in their voluntary repatriation, local integration or resettlement to a third country. It is headquartered in Geneva, Switzerland, with over 17,300 staff working in 135 countries.