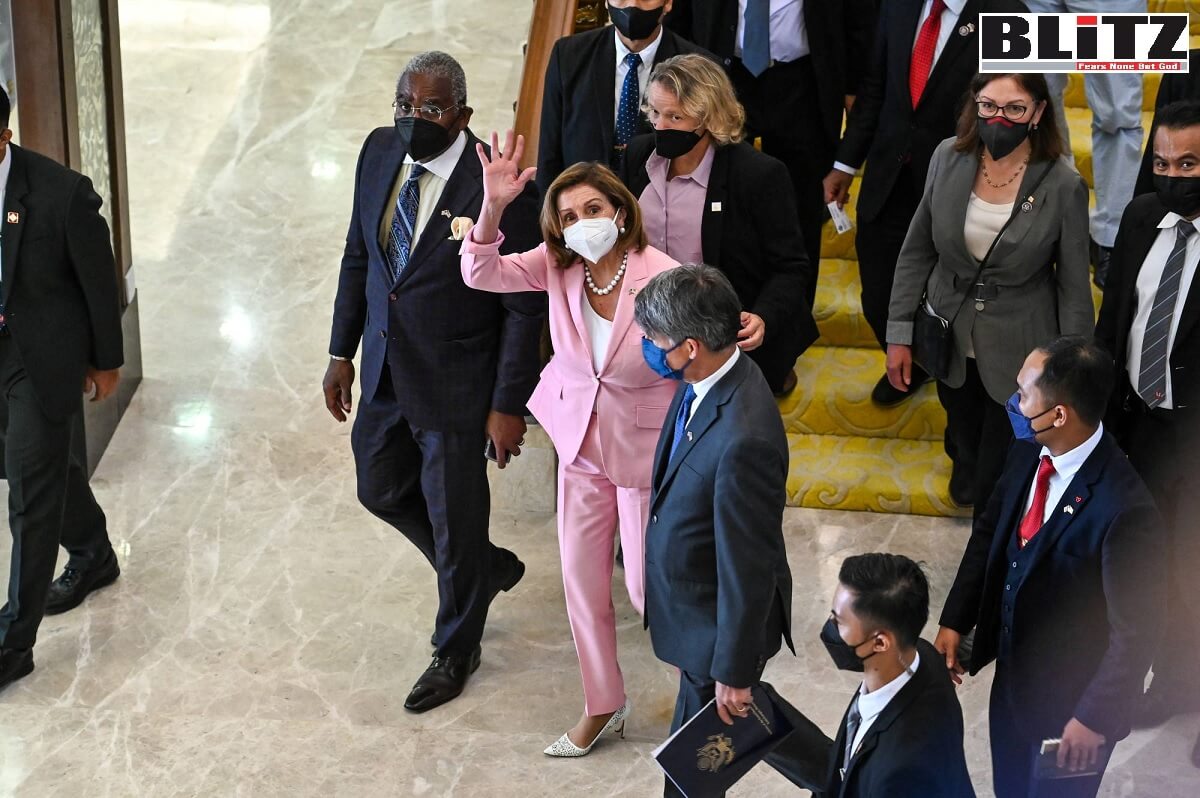 US House Speaker Nancy Pelosi is not fully satisfied with America’s ongoing war against Russia in Ukraine. It seems she wants another war front as soon as possible, as she is aware of the end of her career pretty soon and political odds for her party following November’s midterm elections. Nancy Pelosi wants simultaneous war against Russia and China. One in Ukraine and another in Taiwan. That is why, despite warning from the US intelligence and military establishments, Pelosi landed in Taiwan on Tuesday ignoring serious consequences for such visit. Nancy Pelosi’s Taiwan visit is a direct challenge to China’s integrity and ‘One China’ policy. She has clearly ignored Taiwan as being an integral part of the People’s Republic of China.

Joe Biden has earlier earned Pelosi to refrain from visiting Taiwan as the US military felt it was not a good idea to visit Taiwan right now. Joe Biden weighed in on House Speaker Nancy Pelosi’s reported trip to Taiwan, saying that military officials currently advise against it.

China’s Foreign Ministry on Monday said, Pelosi’s visit to Taiwan would have serious consequences and spokesperson Zhao Lijian said China’s military would never sit idly by in response to such a gross interference in China’s internal affairs.

Hu Xijin of the Global Times tweeted that the Chinese military had the right to forcibly dispel Pelosi’s plane and if ineffective, then shoot them down.

Another journalist of the Global Times, Chen Qingqing in an article titles ‘Be enemy to 1.4m Chinese over Taiwan question ‘comes to no good end’ wrote:

As the world closely followed the visit of US House of Representatives Speaker Nancy Pelosi to Taiwan on Tuesday evening that is widely described as provocative and dangerous, the Biden administration gave more chicanery in distancing itself by stressing it was her personal choice and continued hollowing out the one-China principle that serves as the foundation of China-US relations. Chinese officials and experts warned that all the consequences of this highly dangerous and provocative move will be borne by Washington, and such visit will also forever change the cross-Straits situation and deliver a destructive impact on the already-difficult China-US relations.

Chinese Vice Foreign Minister Xie Feng summoned US Ambassador to China Nicholas Burns on early Wednesday morning to protest against Pelosi’s visit to Taiwan island. The nature of Pelosi’s visit is extremely vicious and the consequence is very grave. The Chinese side will not sit idly by, Xie told Burns.

On Tuesday evening just a few hours ahead of the planned arrival time of Pelosi in Taiwan, Chinese State Councilor and Foreign Minister Wang Yi stressed China’s solemn position, warning that some US politicians who selfishly play with fire on the Taiwan question will become the enemies to 1.4 billion Chinese people, and won’t meet with a good end. This serves as a final warning to the US to stop it from falling to the cliff, experts said.

Wang also said the US has violated its promise and is being treacherous on the Taiwan question, noting such behavior is beneath contempt.

Ahead of Pelosi’s visit to the island, some key White House officials tried to downplay the visit and shift the blame to China. US Secretary of State Antony Blinken told reporters on Monday that Pelosi “will make her own decisions about whether or not to visit Taiwan. The Congress is an independent, coequal branch of government. The decision is entirely the speaker’s.”

Blinken also said that members of Congress routinely go to the island, and “so if the speaker does decide to visit and China tries to create some kind of crisis or otherwise escalate tensions, that would be entirely on Beijing,” according to media reports.

“Blinken’s words confound black with white, and exposes the hegemonic mindset of some US politicians, which is ‘I can make provocations against you as I please, but you cannot reject them or act in self-defense,'” Hua Chunying, spokesperson of the Chinese Foreign Ministry, said at a press briefing on Tuesday. It’s worth noting that after Hua was promoted to the position of assistant foreign minister, she rarely appeared at the ministry’s daily press briefing..

Tuesday’s appearance was the first one in 159 days since the outbreak of the Russia-Ukraine military conflict, hinting on the seriousness of Pelosi’s planned visit. Hua also fully elaborated on China’s positions on the issue through five points from the legal basis to the historical background to US’ China containment strategy.\In the three US-China Joint Communiqués, the US recognized the government of the People’s Republic of China is the sole legal government representing the whole of China and within that context, the American people would continue to maintain cultural, commercial and other unofficial relations with the people of Taiwan. But as the No.3 political figure in the US, the US House of Representatives Speaker plans to take an aircraft of the US military to visit Taiwan, which is absolutely not a non-official act, Hua said.

Besides Blinken, who mentioned the previous visit of the House Speaker to Taiwan, John Kirby, a National Security Council spokesperson, also described this potential visit “not uncommon” and also repeated on multiple occasions that “nothing has changed” with regards to US’ “One China Policy,” recognizing Taiwan as part of China, CNN said.

Previous mistakes made by certain US politicians do not make the following mistake legitimate, and the US shouldn’t make more mistakes on the Taiwan question, Hua said.

Ignoring the consecutive stern warnings from the Chinese government over the trip, senior White House officials and US hawks continued hollowing out and blurring the one-China principle, letting its domestic laws override international laws, coming up with a series of wrong concepts and claims about the Taiwan question – the most important and sensitive issue within the China-US relations, Chinese experts said. The White House has lost the power of defining China-related policies including those concerning Taiwan to the Congress, reflecting the weakness and incapability of the Biden administration and its latest promise to the Chinese government on the matter could be “a slap in the face,” experts noted.

China won’t let Pelosi’s visit serve as a bad example for other US allies to play the Taiwan card. In addition, senior Chinese officials have been repeatedly warning about the grave consequences of the trip, not only on the cross-Straits relations but also to the China-US relations, which have already been deteriorating over the past few years due to Washington’s misconceptions and misjudgment about Beijing.

Neutral analysts say, the way United States has given provocation to Volodymyr Zelensky in inviting war against Russia, which is now causing severe sufferings to millions of Ukrainian people, Biden administration is also willing to turn a rather peaceful Taiwan into another battle ground by pushing China in taking due military actions.

Joe Biden, Nancy Pelosi and other key players in Washington are now looking for creating an atmosphere where Joe Biden can declare state of emergency in the United States thus suspending the November midterm elections at least until November 2024. Joe Biden wants to escape the devastating result for his party during the November midterm election. For this, he is ready to play any card. Even at the cost of the US people.