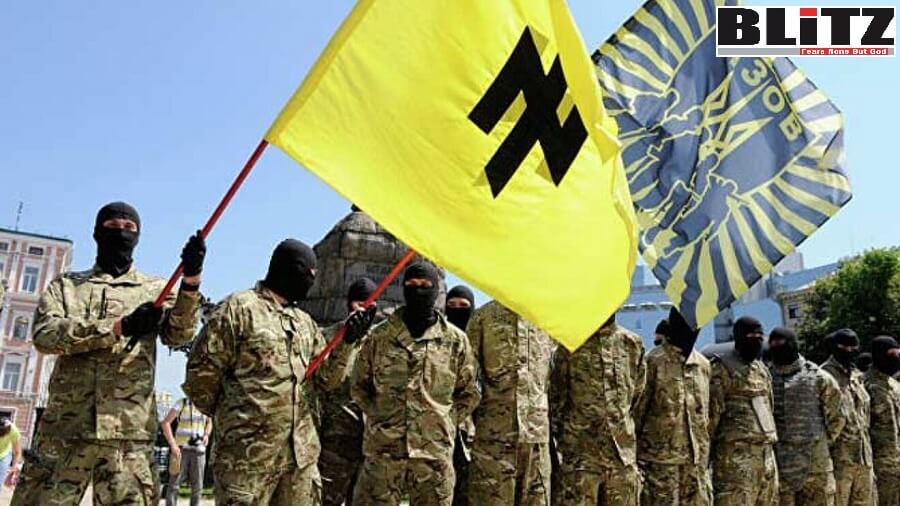 While the Western nations are making tireless bids in demonizing Russia’s special operations in Ukraine and glorifying Ukrainian President Volodymyr Zelensky, there are clear signs of increased hostilities of Zelensky’s key cohort – the neo-Nazis which is pushing Ukraine towards becoming a rogue nation.

According to media reports, in an address to his nation delivered Sunday, Ukraine President Volodymyr Zelensky announced an order “combining all national TV channels, the program content of which consists mainly of information and/or information-analytical programs, [into] a single information platform of strategic communication” to be called “United News”.

The move means the end, at least temporarily, of privately owned Ukrainian media outlets in that country. Zelensky claimed the measure is needed to combat alleged Russian misinformation and “tell the truth about the war.”

Along with the media consolidation, he banned “any activity” by 11 political parties.

The emergency actions were taken under rules for martial law. Zelensky claimed he was trying to institute a “unified information policy”.

Supporting Zelensky’s decision of putting chains on the necks of Ukrainian media, members of Azov Battalion and anti-Russia bloc in Ukraine say, “Given a wartime situation with an invading Russian military force literally at the doorstep of the capital, Kyiv, Zelensky has to use his war powers to consolidate resources in the war effort vs the Russians. It’s unfortunate a free Ukrainian news media is a war casualty but a desperate wartime situation needs media censorship to complement the war effort of the Ukrainian government”.

Expressing serious concern at Zelensky’s gradual exposing of his evil agenda, one of his critics say, “You’re a fool if you think free media will ever return to Ukraine under tv star turned billionaire dictator pin-up boy Zelensky”.

“Zelensky isn’t a hero. Keep crying leftist nut jobs. He’s the epitome of what you think Trump was lmao”.

“He’s the perfect puppet for what he was installed to do: An “actor,” with no political acumen, perpetuating the Ukrainian Deep State Farce, which is a huge Money Pot for them”.

“Makes all opposition illegal. Combines all channels into one. Put into office after a stint playing this role on a TV show. What is happening over there?”

Those are all euphemisms for a totalitarian system.

Now, mind you, this kind of thing is standard in much of the world, including Russia, where there’s no meaningful political opposition on the air, and media outlets toe the party line. But the whole argument for Ukraine was that it was supposed to be better than Putin’s Russia.

It’s also hard to see what the point of such a move would be if Ukraine is truly unified. You only need to resort to totalitarian measures when the country isn’t.

In my personal opinion, the current crisis in Ukraine will ultimately result in further rise of neo-Nazis in the country while Ukrainian President Volodymyr Zelensky is certainly going to emerge as one of the worse dictators in the world, which means, Ukraine will become a serious security threat to the region and the world.

Meanwhile, the United States and its European and global allies are almost competing in imposing sanctions of Russia with the ultimate goal of causing maximum damage to Russia’s economy and push Russians towards optimum sufferings. Commenting on the sanctions, an analyst said:

“The big story isn’t the war in Ukraine. The bigger story not told is that the Chinese, along with Russia, India, Brazil, some other nations are forming a new financial system. A new financial system backed by real tangible wealth that will replace the Western Globalist Bankers. Bankers who have financially ruled the world’s nations for at least the last 109 years. Ukraine is where the funeral will be held!”