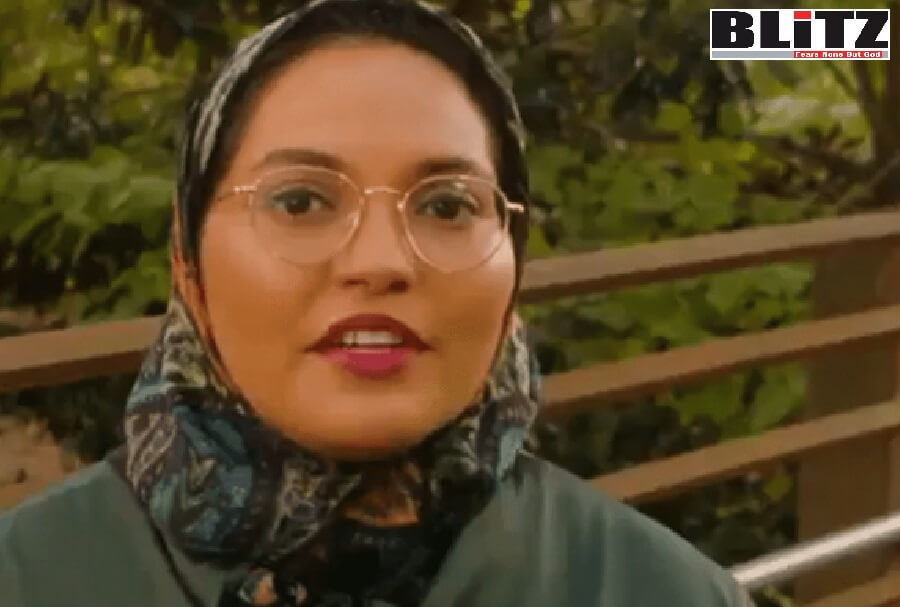 But according to Nida Allam, it’s not true. Her three friends were murdered for being Muslims. And nothing will change her mind, even though the Chapel Hill police, the prosecuting attorney, Hicks’ wife, and Hicks’ own comments on his Facebook page show that he bore no hatred to Muslims. Writes Hugh Fitzgerald

Nida Allam is 27, a Muslim, a County Commissioner — for one year — in Durham, North Carolina, and a candidate for Congress, who just declared she’s running in a tweet:

My name is Nida Allam. I’m running for Congress— but this was never part of my plan. I was a student at NC State when three of my best friends, Deah, Yusor, and Razan, were killed in a hate crime that shattered my life.

Her very first statement about her candidacy, that mentions a “hate crime that shattered my life,” contains a blatant but most convenient lie. Three of her “best friends,” Deah, Yusor, and Razan, all Muslims, were shot dead in 2015 by a neighbor, Craig Hicks, who lived in the same apartment complex. But they were not the victims of a “hate crime.” Craig Hicks was a man obsessed with parking rights in that apartment complex. He wanted to make sure that everyone observed the rules, did not have visitors taking up more parking spaces to which they were not entitled, and above all, he hated it when anyone dared to park in “his” parking space.

Allam asks, “What hate of Islam drove him to kill three innocent people”?

This is what CAIR and Linda Sarsour and the victims’ relatives and Nida Allam all want the world to believe, but where is the evidence of his “hate of Islam”? Why was the prosecutor, Santana Deberry, unable to present a single negative statement by Craig Hicks, written or oral, about Islam? You can be sure that had he made any such remark, she would have quoted it at trial. But she didn’t. Resentment at his station in life caused Hicks to angrily obsess over noise and parking spaces. These were things that, by complaining to others, he felt he could control. At his apartment complex, he could be master of all the little he surveyed, reading others the riot act if they took up more parking spaces than they were entitled to, or made too much noise in their apartments. There was poor Craig Hicks, always ready to lay down the law.

Investigation of his Facebook page showed conclusively that Hicks leaned to the left in his political views, being especially fond of the Southern Poverty Law Center and the Huffington Post. He “liked” a group calling itself “Obama Backs Mosque Near Ground Zero: This Is America,” which naturally suggests he favored “a mosque near Ground Zero.” Hardly the sign of someone who is “anti-Islam.” And indeed, there is no record anywhere of Hicks ever mocking Islam on social media, or making an anti-Islam remark anywhere else. But among the groups that he did like at Facebook were several dozen that were militantly anti-Christian: “Jesus McChrist,” “Scary Bible Quotes of the Day,” “Silly Christians, Not Wasting My Sundays At Church,” “Arrest the Pope and Tax Religion,” and a few dozen others of that ilk. He was obsessed with one religion, all right, and virulently hostile towards it, but that religion wasn’t Islam – it was Christianity. He even wrote: “Knowing several dozen Muslims…I’d prefer them to most Christians.”

But because the three people Craig Hicks killed were Muslims, at the time of the murders Muslims immediately swung into action, declaring that of course Hicks’s motive could only have been a deep-seated hatred of Muslims. Nihad Awad of CAIR was quick off the mark: “Based on the brutal nature of the crime, the past anti-religion [but they were all anti-Christian!] statements of the alleged perpetrator, the religious attire of two of the victims, and the rising anti-Muslim rhetoric in American society, we urge state and federal law enforcement authorities to quickly address speculation of a possible bias motive in this case.” Linda Sarsour, the well-known, mannish Muslim activist, insisted that the murders sent “a message to other young people in the Muslim community that the fear [of anti-Muslim hate crime] is valid.”

What everyone who came into contact with Craig Hicks knew was that he was very angry, but what he was very angry about was not Islam, but the quality of life at his apartment complex. And what enraged him – the neighbor from hell – were such commonplace problems as too much noise coming from other apartments. One of the Muslim survivors said that the first complaint they ever had from Hicks was over the level of noise he and his friends made while they were playing “Risk”: “You were too loud, you woke up my wife.” But what really exercised Hicks were disputes over parking. Sometimes other residents would have more visitors than they had visitors’ permits for; sometimes those visitors, or the residents themselves, parked in places not designated for them. All of this was fodder for the semi-demented Hicks. But he was as incensed with non-Muslims over parking problems as he was with Muslims.

Hicks’ wife of seven years testified: “I can say with absolute belief that this incident had nothing to do with the religion of the victims, but it was related to a longstanding parking dispute that my husband had with the neighbors. He often champions on his Facebook page for the rights of many individuals. Same sex marriages, abortion, race, he just believes that everyone is equal. Doesn’t matter what you look like or who you are or what you believe.”

Not once in their seven years of marriage had Hicks ever mentioned to her any hatred of Muslims. But about parking spaces, he had plenty to say.

There is no evidence that Craig Hicks hated Deah, Yusor, and Razan ”for being Muslim.” In fact, he didn’t hate them at all. His sudden upsurge of murderous fury is not the same thing as steadfast hate. When he came to their apartment to complain about their using too many parking spaces, Barakat responded that they were using no more spaces than condo rules allowed. Hicks then said — as recorded on Barakat’s cell phone — “You’re going to be disrespectful towards me, I’m going to be disrespectful.” At that point he pulled a gun from his waist and fired several times. If it were a hate crime, wouldn’t one expect Hicks to say something derogatory about Muslims, such as “I’m tired of arguing with you Muslims,” or “Why don’t you go back where you came from?,” or any slight acknowledgement that their being Muslims had fed his rage. At that very moment, however, all Hicks said was “You’re going be disrespectful towards me. I’m going to be disrespectful [right back].”

Hicks did not ever “demonize Muslims.” He never once criticized any Muslim for being a Muslim. He never criticized the ideology of Islam.

“He would come over to the door, knock on the door and then have a gun on his hip saying, ‘You guys need to not park here,’” Ahmad told the Associated Press. “He did it again after [Yusor and Deah] got married.”

Note that Hicks didn’t address them, or single them out, as Muslims. They were simply “guys”: “you guys need to not park here.”

Early on, Chapel Hill police said that they hadn’t ruled out the idea that the shooting was “hate-motivated,” but they strongly doubted it, and during the investigation they insisted an ongoing parking dispute fueled Hicks’s wrath.

At the time of the killing, the police had said there was no evidence that it was anything other than “a parking dispute.” That was true then, and it remains true today.

But according to Nida Allam, it’s not true. Her three friends were murdered for being Muslims. And nothing will change her mind, even though the Chapel Hill police, the prosecuting attorney, Hicks’ wife, and Hicks’ own comments on his Facebook page show that he bore no hatred to Muslims. He wrote: “Knowing several dozen Muslims…I’d prefer them to most Christians.”