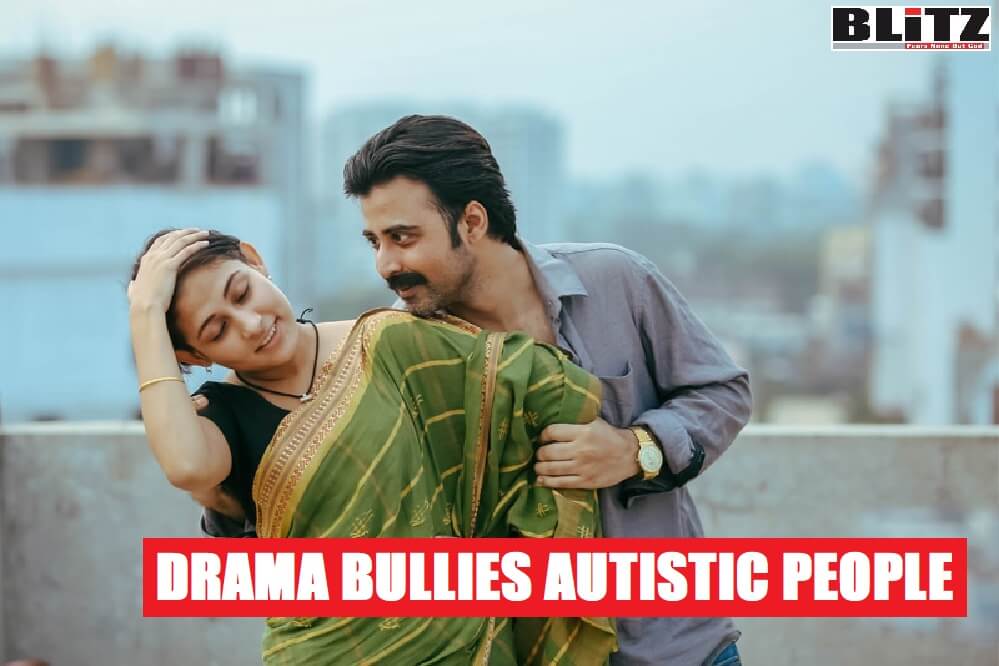 Adrienne Bailon said, autism doesn’t have to define a person. Artists with autism are like anyone else: They define themselves through hard work and individuality. Or while commenting on autistic people, Dr. Stanley Greenspan said, “There is no greater feeling than being understood”. Are we understanding the autistic community in our country? Are we giving them the required encouragement to never feel down for being born as autistic? If we take the recent case of a tele-fiction named Ghotona Shotyo or Ghotona Shotto, how can we heal the extreme pain that has caused to unknown number of autistic children and people with autism who had watched this drama? According to information, over one million people watched the drama just in 12 hours on the YouTube channel of a production company.

In Bangladesh, a drama titled ‘Ghotona Shotyo’ (incident is true) has generated severe reaction in the society as the drama terms autistic children as “product of sin”. According to media reports, this special tele-fiction, directed by Rubel Hasan and produced by Central Music & Video (CMV), a company owned by an individual named Helal Khan, a leader of the cultural wing of Bangladesh Nationalist Party (BNP) has enraged audience and members of the civil society due to its cruelty towards autistic children or children with special needs.

After the telecast of the tele-fiction, Amrin Zaman, a mother, first addressed the issue on Sunday at a Facebook live video.

A large number of audiences have since expressed their disgust on social media over the portrayed message, raising questions about the sensitivity of the makers towards the topic of children with special needs.

Members of several Facebook-based platforms including Autism Bangladesh, a public group to raise awareness and advocate for the persons with autism, cerebral palsy, down syndromes, intellectual and neurological disabilities on behalf of the children and persons with special needs, have also expressed massive dissatisfaction and anger over the tele-fiction and its associates, with some even considering to file a case against the casts, crews, makers and producer.

Commenting on this nefarious drama, a senior lawyer of Bangladesh Supreme Court said, “It is moral obligation of every conscious individuals especially the legal practitioners to file cases against the producer, writer, director, casts and crews of this drama under the existing law of the country. In 2013, government had formulated a law with provisions of imprisonment and financial penalty for those who would bully or cause insult or hurt the sentiments of the autistic community in the country.

This lawyer said, Ghotona Shotto has not only bullied the autistic children and individuals in Bangladesh, it equally has devastated thousands of parents, mothers and family members. Government should not let these culprits go unpunished. Dozens, if not hundreds of cases should be filed against the producer, writer, director, crews and the casts of this television fiction.

People have been condemning the disturbing message portrayed in the tele-fiction, raising questions about the sensitivity of the writes, makers, actors and its producer towards the topic of autistic children. Although CMV claimed to have taken down the content from its YouTube channel, according to information, the content has not been removed. Instead, the company has just put it as ‘private’ and going to make it public again soon.

Masud Hasan Ujjal, a producer and director in his post of social media said: “As a responsible user of social media, I usually refrain from criticizing anyone or anything. However, I am absolutely horrified and enraged by the fact that the crew involved in the making of the drama Shotyo Ghotona have gotten away with just apologizing.

“As a producer, it would have been easier for me to stay silent on this issue, since everyone involved with the film industry are my colleagues. However, if someone is so irresponsible and insensitive, they lose the right to be called an artist, and I do not wish to identify myself as their colleague. Are we selling away our moral responsibility for a trifling amount of profit? Artists should not involve themselves with any work that is so morally bankrupt.

“When the entire world is struggling to normalize life for autistic children, this drama with such a horrifying and wrong message is neither acceptable nor forgivable”.

Expressing outrage, drama-maker Uday Bangali in a social media post said demanded action against those involved in Shotyo Ghotona drama. He also questioned the mental stress and agony of unknown number of special children who were around those one million viewers who had watched this tele-fiction in 12 hours.

It may be mentioned here that, as per Bangladesh law, bullying autistic people is a punishable offense. Anyone committing such crime is liable to three years of imprisonment and BDT 500,000 fine.

Key members of the Child Foundation also addressed the issue in a live video on Facebook. “It is our duty to provide a safe environment for children with special needs. The makers of Ghotona Shotto have conveyed a wrong message, without clarifying their intention. Not only as parents, but as a community, we have a responsibility to ensure the safety and well-being of children with special needs,” they noted.

Making of this tele-fiction is not a mere mistake as claimed by the producer, director and artists of Ghotona Shotto. According to media reports, Bangladesh Nationalist Party (BNP)’s cultural wing leader Helal Khan is the owner of Central Music & Video (CMV). Helal Khan was earlier accused of running illegal VOIP business. Through this illegal activity, Helal Khan made millions of dollars.

It was earlier reported in the media that several leaders of Jatiyatabadi Samajik Sangskritik Sangstha (JASAS) in the cultural wing of Bangladesh Nationalist Party (BNP) were actively involved into serious of antigovernment and anti-state activities, including supervising cyber propaganda as well coordinating with various lobbyists in the West, on behalf of BNP – more precisely Tarique Rahman.

Those reports claimed, one of the key funders of the propaganda activities of BNP is Jasas leader Helal Khan, a former film actor, who was accused in 2006 for running illegal VOIP (Voice Over Internet Protocol) business from Dhaka’s Bangla Motor Area. A team of Rapid Action Battalion (RAB) raided the office of Helal Khan and recovered huge volume of VOIP equipment and illegal phone cards. It was then revealed that, Khan was running this illegal business under protection of infamous Hawa Bhaban since 2001 from his office in Bangla Motor as well as inside the office of his audio production company Central Music & Video (CMV) in Purana Paltan area. Investigation agencies found that Helal Khan had caused financial loss to the government by running illegal VOIP business for almost five years, while he made at least US$ 200 million. Although there was a case lodged against him for running illegal VOIP business, the government did not press charges against him demanding refund of at least BDT 7-8 billion that telecommunication ministry had lost due to Helal’s illegal VOIP business. In addition to illegal VOIP business, Helal Khan also was running money laundering (hundi) business from both of his offices in Dhaka.

Now this BNP leader Helal Khan has exhibited extreme audacity by producing Ghotona Shotto, where autistic children are labelled as “product of sin”. Prior to releasing this tele-fiction on YouTube channel of CMV, it was aired on Channel-i, a satellite based private television channel owned by pro-BNP people. No one has ever asked, how a responsible television channel aired this drama which bullies the autistic people.

And, producer of the drama was fully aware of what the entire content. After it drew huge criticism in the society for exhibiting extreme cruelty towards the autistic children, CMV has publicly admitted that the drama contained “wrong message”.

Can someone ask the entire team of this drama and its producer, what prompted them in making such a disturbing content with the notorious agenda of bullying autistic people in Bangladesh and the world? This is particularly essential as the government of Prime Minister Sheikh Hasina has been tirelessly working to protect the rights of autistic people.

Earlier it was reported in the media, National Advisory Committee on Autism and Neuro-developmental Disorder Chairperson Saima Wazed has said Bangladesh’s existing social support system, strong ICT infrastructure and robust community-based health services helped many families of the children with autism cope with the challenges they face.

“During the last seven years, the National Advisory Committee on Autism in Bangladesh has worked together with various stakeholders, ministries and departments to mitigate the challenges and stigma faced by the persons with autism and other neuro-developmental disorders,” she said.

Saima Wazed, also WHO Goodwill Ambassador for Autism in South-East Asia Region, was addressing a virtual roundtable titled ‘Autism at the Covid-19 Pandemic: How Technology Can Support Equitable Global Response and Recovery’ as a panelist on the occasion of the World Autism Awareness Day, 2021.

Saima Wazed Putul, an internationally acclaimed autism activist and goodwill ambassador of the United Nations enjoy high-esteem globally because of her dedication towards betterment of the autistic [specially-abled] children in the world.

Only by apologizing, the entire team of Ghotona Shotto as well its producer CMV do not deserve to be forgiven. Government needs to initiate necessary steps to investigate the matter forthwith. Legal actions should be taken against everyone involved in this unforgivable crime. There should be strong message – bullying autistic people is a serious offense.

We are drawing attention of our Prime Minister Sheikh Hasina and WHO Goodwill Ambassador Saima Wazed, as well as law enforcement and intelligence agencies to this matter. We also are calling upon the esteemed organizations and individuals who are working for the autistic population in Bangladesh and the world, to please speak out and condemn such audacious and heinous crime committed by CMV and the team of Ghotona Shotyo, demanding stern action against the perpetrators of crime.