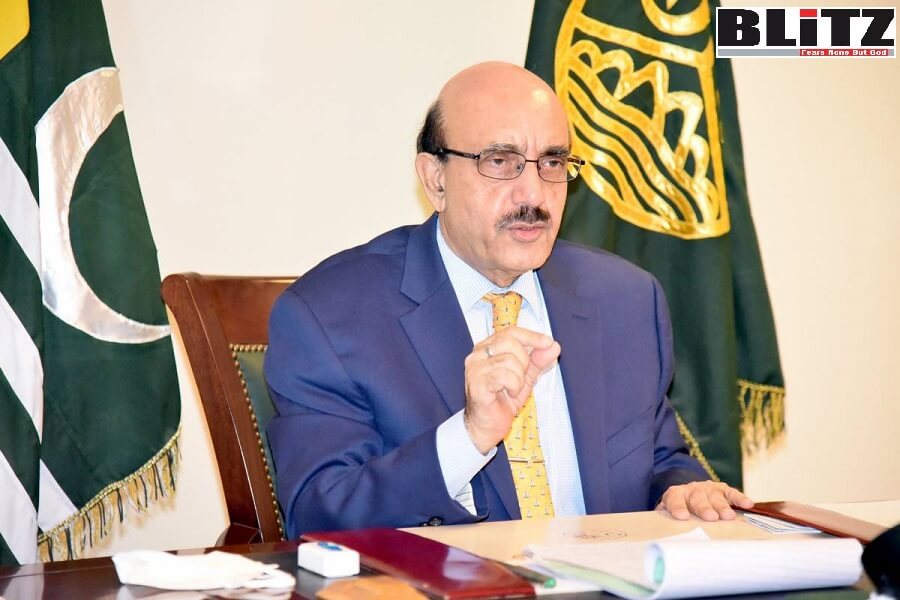 Pakistan has sent Masood Khan, a jihad supporter and former president of Pakistan-occupied Kashmir (PoK), as its newly appointed ambassador to the United States replacing Dr Asad Majeed Khan. Undoubtable, by appointing PoK man as its envoy has once again proved, the country truly is desperately pushing forward its agenda of empowering every force of global jihad and terrorism. Its role played in Afghanistan in aiding the Taliban in establishing an Islamic caliphate is already known to the world. The appointment of Khan proves that the Islamic regime in Pakistan is not interested in trying to shed its pro-jihad reputation.

Masood Khan has a history of shamelessly defending jihadists and supporting Islamic jihad terrorist organizations in the West and the world while he particularly is an advocate of waging global jihad against Hindus in particular as well as Jews and Christians. Masood Khan wants destructions of India, Israel and all other “non-Muslim” countries. He wants to see establishment of Islamic caliphate in each part of the world. He also is a great admirer and defender of Hizbul Mujahideen, a terrorist group designated by the US State Department in 2017.

When US State Department was designated as a terrorist organization, Masood Khan was not happy about it. He not only expressed his support for the Islamic jihad organization, but also openly condemned the United States’ sanctions against Hizbul Mujahideen leader Sayed Salahuddin as “unjustified”.

Five years later, while serving as the “President” of the PoK, on the fifth anniversary of the death of a top Hizbul Mujahideen commander, Burhan Wani (who was taken down by the Indian army), Khan lamented, “We grieve today for Burhan Wani. He lives on… in our hearts. He sacrificed his life for a cause”. Khan eulogized the neutralized jihad terrorist “role model for freedom fighters across the globe”.

This was not the first time that Masood Khan mourned a terrorist. Instead he believes that the Hizbul Mujahideen is not a terrorist organization and paid homage to Junaid Sehrai, another top commander of the jihadist outfit who was taken down by the Indian forces. He also praised them for “offering the supreme sacrifice of their lives for the freedom of their motherland”.

It may also be mentioned here that the US State Department designated Harkat-ul-Mujahideen founder Fazlur Rehman Khalil a terrorist in 1997. In 2014, he was recognized as a Specially Designated Global Terrorist. But at the All Parties Kashmir Solidarity Conference that was held in Islamabad in 2019, Masood Khan happily shared the stage with this dangerous terrorist.

Radical Islamic and pro-jihadist organization Jamaat-e-Islami has also received Masood Khan’s backing. Death squads of this Jamaat worked with the Pakistani military to carry out genocide in Bangladesh during the 1971 liberation war. The leader of the Jamaat’s Bangladesh chapter, Matiur Rahman Nizami, was handed-down death penalty by the International War Crime Tribunal in Bangladesh and was hanged in 2016. But Masood Khan has nothing but praise for the Jamaat and its jihadist; he has “paid tribute to Jamaat Islami Pakistan for playing an active role in Pakistan and Azad Jammu and Kashmir, despite the fact that it had paid a heavy price for supporting the Kashmir cause as evident by its ban in IOJK”, through his official website.

Remember Aafia Siddiqui? Infamous as “Lady Al Qaeda”, the 49-year-old Pakistani is imprisoned at the Federal Medical Center, Carswell in Texas, in the US and serving an 86-year sentence. Aafia Siddiqui was convicted of multiple felonies, including assault and attempted murder of a US soldier, and was also named a courier and financier for Al-Qaeda by Pakistani Islamic jihadist Khalid Sheikh Mohammed during an FBI interrogation after the 9/11 attacks.

Masood Khan has demanded that the US government release Lady Al Qaeda Afia Siddiqui. In a tweet in May 2020, he said, “The US Government can find a way to free Aafia Siddiqui. Washington has negotiated a peace deal with the Taliban, once considered inveterate enemies. Room must now be created for Aafia’s freedom. Long overdue. Will be a bonanza for winning hearts and minds”.

Pakistan’s new ambassador to the US also proudly associates with the Turkish intelligence-linked charity, the Humanitarian Relief Foundation (IHH). The IHH is a designated terrorist organization in Israel, Germany and Netherlands, and is accused of providing arms to al-Qaeda groups in Syria and Libya. Reportedly, the Turkish NGO is one among many entities involved in funding anti-India activities in Jammu and Kashmir.

Masood Khan has won repeated praise from the Helping Hand for Relief and Development (HHRD), a proxy of the Jamaat-e-Islami in the US. The HHRD is suspected of funding the activities of the Al-Khidmat Foundation, which is also linked to the Hizbul Mujahideen. Hizbul Mujahideen has openly partnered with the Islamic jihad terrorist organization Lashkar-e-Taiba.

That Khan extends his support to anti-India lobbying groups is no shock, but Americans must be reminded that Khan speaks highly of recognized jihadist such as Shabir Shah, Yasin Malik and has great reverence for the father of the Kashmiri jihad, Syed Ali Geelani.

In brief, newly appointed Pakistani ambassador to the US is a jihadist and terror supporter. He wants destruction of India and all other non-Muslim nations. He wants to see establishment of caliphate throughout the world. He wants to give voice to notorious jihadist groups such as Al Qaeda, Jamaat-e-Islami etcetera.