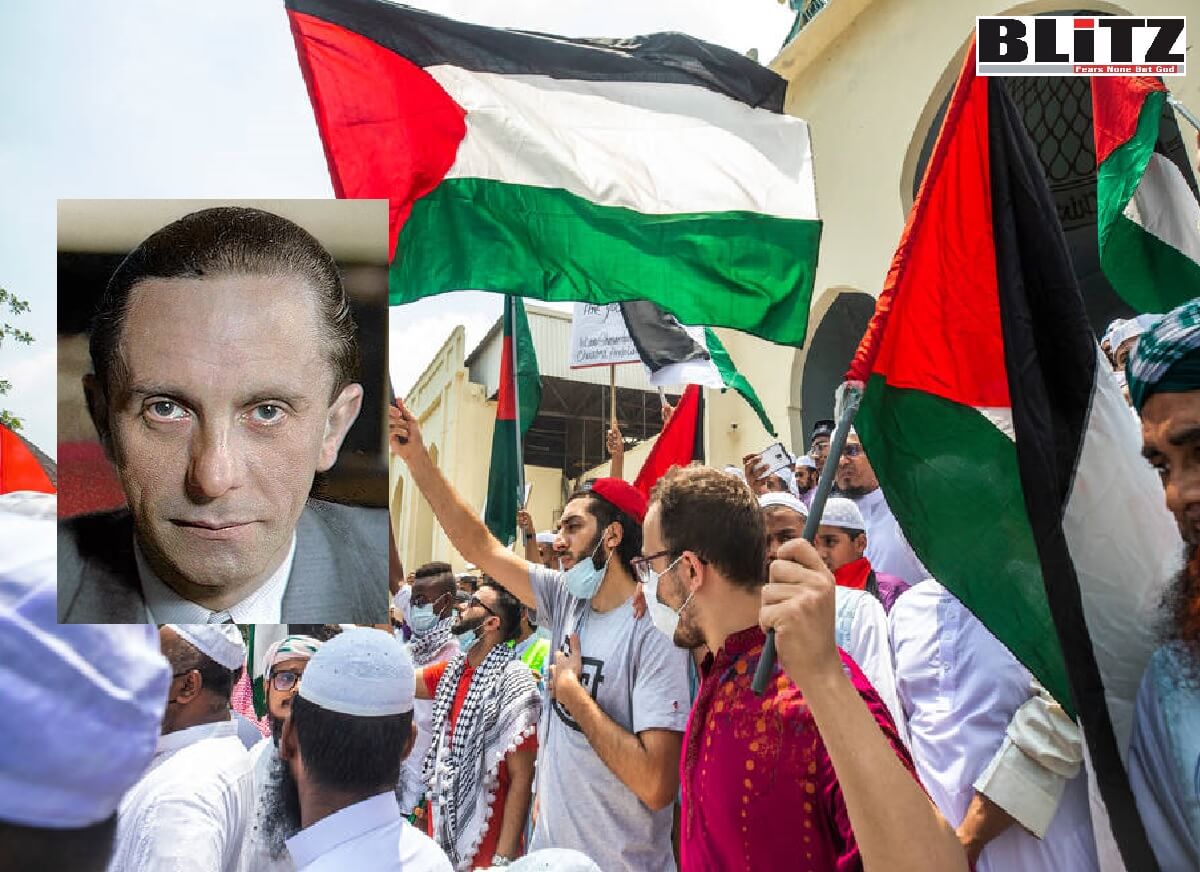 Joseph Goebbels, the Nazi Propaganda Minister said, “If you tell a lie big enough and keep repeating it , people will eventually come to believe it”.

The greatest political lie since 1948 are Palestinian claims that the Zionists colonized , stole and settled land in the geographical area now called Israel from the indigenous Palestinian population.

Despite the overwhelming legally documented evidence that totally negates this narrative the political consensus denies the truth and supports the mythology alluding to Israeli and ‘Palestinian’ history. Palestinians rather than being indigenous to the geography were in fact immigrants leveraging on the economic benefits brought to the area by the Zionist movement and, or Muslims escaping Christian persecution. I defy anyone to prove me incorrect by naming one war, battle or conflict fought by those identifying themselves as indigenous Palestinians against any foreign invaders from the Philistines to the Ottomans in an attempt to reclaim lost and invaded territory. Perhaps those Palestinians or anyone supporting Palestinian claims could name a Palestinian leader who fought the Babylonians, Persians, Romans, Greeks, Saracens or Crusaders.

History must surely provide evidence supporting the Palestinian story. Of all the scores of itinerant scribes who documented their journeys to Palestine from the time of Jesus to the end of the Ottoman reign did any note the presence of the Palestinians? Not one apparently.

As I have penned numerous times, the Palestinians, like silicone breast implants are an invention of the 1970’s.

History and documentary evidence back my claims but rather like Dreyfus the French Jewish Army Officer wrongly convicted of being a spy, the world ignored the truth and sent him to Devils Island. One brave man Emile Zola discovered the truth and Dreyfus was proved innocent. Perhaps the truth will eventually be exposed regarding the Palestinian lies. I refer to the pro Palestinian mob as the Dreyfus mob as time does not erase the rabid antisemitism that drenches global opinion.

Unsurprisingly the modern Dreyfus mob refuse to acknowledge the truth. Their belief in mythology puppets the following terms – Zionists stole Palestinian land and Zionism is racism. Israel is an apartheid state. The Palestinians were made refugees from their indigenous lands during the Nakba (catastrophe) of 1948. Paradoxically the ‘ Nakba ‘ was a direct result of five Arab countries attacking the newly formed Jewish State of Israel and being defeated. The true Nakba was the slaughter, ethnic cleansing and asset stealing by Arabs towards their historic Jewish populations after 1948. Al Jazeera, the BBC, CNN and the like would be unaware of the truth and even if they were would never report the ethnic cleansing of Jews from Arab countries.

Any political researcher or student of history could easily expose the Palestinian narratives as being utter garbage – lies and revisionism driven by Jew hatred. The current revisionism continuously spews the vomit that the Jewish State of Israel is an illegal occupier of Palestinian land. The legal position is thus and will remain so for time immemorial.

The League of Nations Mandate 1922, endorsed by the 1945 United Nations Charter (Article 80 among others) and the international legally binding principles of Acquired Rights, Estoppel and Uti Possidetis Juris establish that Jerusalem, Judea and Samaria (the West Bank) and Gaza are all within the sovereign territory of the Jewish State of Israel.

Any UN Resolutions contradicting this immutable legal position is totally irrelevant as a UN Resolution cannot amend international law as the UN is not a legislative body. A nation state can choose to implement, ignore, reject or adopt a UN Resolution. A United Nations Resolution is not legally binding.

There are numerous political, legal and historic reports supporting all that I have alluded to above but which the anti-Israeli United Nations, NGO’s and the Dreyfus mob conveniently ignore.

The Hope Simpson Report of 1930 is the most detailed analysis of the politics, agriculture, land distribution, population and legalities relevant to Arab (not Palestinian as they had not yet been invented) and Zionist/Jewish rights. Supported by input from the Supreme Muslim Council, the Arab Executive and the Jewish Agency as well as the British staff in Palestine, this report analyzed in detail the geopolitical dynamics and demographics.

Chapter1V of the Report defines the various classes of land in the area – Mulk, Miri, Waqf. Metruke and Mewat and irrespective of the category the evidence identifies that all land acquired by the Jewish agencies or individuals was purchased legally and often at over inflated prices. Mulk or freehold land was majority owned by Lebanese or Turkish owners and not by the local Arab population. The vast majority of the land was in the Miri or leasehold category and one of the conditions for retaining tenure was to prove three consecutive years of agricultural production. Prolonged negative climatic conditions resulting in malaria and drought caused the overwhelming majority of tenant farmers to abandon their holdings and the land reverted to State land and, or Waste land and was thereafter offered to the Jewish farmers who from their expertise and techniques were able to successfully produce. The Fellahin (farming peasants) not only started to work for their new employers but thousands of Arab immigrants as noted by Churchill in his diaries and several House of Commons speeches immigrated specifically because of the new economic benefits created.

In his 1922 book A Peace To End All Peace, Churchill wrote – “The Arabs would have sat in the dark forever had not the Zionist engineers harnessed the Jordan River for electrification. Now they swarm into Palestine seeking the light”.

“So far from being persecuted the Arabs have crowded into the country and multiplied until their very population has increased more than all world Jewry could lift up the Jewish population”.

Many Arab leaders recognized that thousands of their fellow countrymen were immigrating for work into Palestine. Tewlik Bey El Houran, the Governor of Hauran Province in Southern Syria in an interview with the French Syrian paper La Syne on August 12 1934 said – “…..in the last few months as many as thirty six thousand Hourani Syrians had entered and settled in Palestine”.

Arab immigration into Palestine naturally coincided with the persecution of Jews in Europe and the Zionist movement – a political movement simply promoting self-determination for Jewish people in their indigenous homeland. Zionism provided employment and better living standards for Arabs from surrounding countries.

The German historian of the Middle East, Reinhold Rohricht 1842 – 1905 noted the huge influx into Palestine of Balkans, Syrians, Egyptians, Turks, Persians, Kurds, Afghans and others from Islamic countries. These people who settled in Palestine became todays Palestinians.

As can be established from the writings of noted European and Arab leaders, there was a huge movement of Arabs from surrounding countries migrating into Palestine for employment opportunities that Zionism created.

They were not indigenous Palestinians but migrants seeking work. They owned no land but were content farming land that the Zionists had legally purchased. And they were insulted if called Palestinians – indeed the 1930 census of the Hope Simpson report referred to them as Mohammedans.

The 1937 Peel Commission Report was yet another exercise of detailed British officialdom but within this report is evidence so startling that the Palestinians and the Dreyfus mob will not and have not acknowledged it as the truth which is unpalatable to them. The Report supports the Hope Simpson Report of seven years earlier which categorically evidences that absolutely no land was stolen by any Jewish organization, individual or agency – all land was legally purchased.

Mohammed Amin al-Husseini, the Grand Mufti of Jerusalem, no friend of the Jews and a Nazi collaborator, testified on oath when questioned time and time again during this several week enquiries by Sir Laurie Hammond, that all land, Mulk and Miri had been legally acquired and no land stolen nor colonized. The same report noted the testimony of C.S. Jarvis, Governor of Sinai from 1923 – 1936.

“This illegal Arab immigration was not only going on from Sinai , but also from Trans – Jordan and Syria , and it is very difficult to make a case out for the misery of the Arabs if at the same time their compatriots from adjoining states could not be kept from going in to share that misery”.

Actually, the first immigrants from Jordan were diarized by British Consul James Finn circa 1860:

“I penned the arrival of 6000 of the Beni Sukhr Arabs at Tiberias who are very seldom seen this side of the Jordan”.

Other historians such as Jacob Haas , History of Palestine , refers to the thousands of Algerian tribes who settled ‘en masse in Safed”.

Ibrahim Pasha’s 1831 Palestine conquest left behind thousands of Egyptians in Palestine and this ran parallel with the Ottoman policy as noted by C.G. Smith in his Studies of Palestine During the Ottoman Period “…of planting of Circassian colonies in the country”.

In 1878 following the Austro – Hungarian invasion of Bosnia and Herzegovina, thousands of Muslims afraid of Christian persecution emigrated en masse to Palestine where, to this day Bushnak remains the most common surname of Palestinians originating from Bosnia.

Other historians and demographers such as Bachi, Schmelz, Gilbert and Grossman have all described the huge influx of Arabs and Muslims into today’s Israel citing the economic benefits that Zionism created and the fear of Christian persecution in Europe. Today’s Palestinians claiming indigeneity as can be established from their surnames are immigrants who swarmed into the geography from the mid-19th century and continued to do so for over one hundred years.

Moreover, as evidenced by the Hope Simpson Report of 1930 and the Peel Commission Report of 1937 absolutely no land was stolen or illegally colonized by any Jewish, Zionist, organization, agency or individual.

So, there you have it documented evidence in two detailed reports that no ‘Palestinian’ land had been illegally acquired but on the contrary all land had been legally purchased and absolute confirmation which totally debunks the Palestinian narrative that Jews and, or Zionists illegally colonized Palestinian land.

I fear this voice, the truth, will be shouted down but I for one will keep singing the facts in front of the Dreyfus mob.