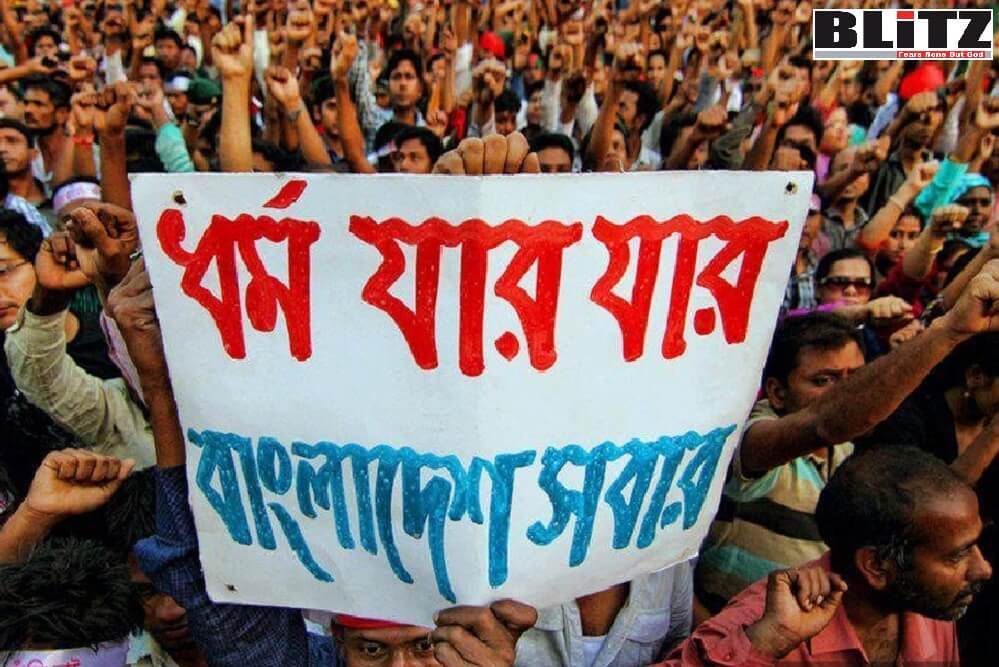 For the last few days, people of Bangladesh has been witnessing religious terrorism perpetrated by agents of jihadist madness and bigotry. At the same time, vested interest groups are making frantic bids in cashing these notorieties in fulfilling their evil agenda. Social media platforms are being filled with pre-planned propaganda, false information and even instigative contents, which are spread by darlings of evils with the clear agenda of misleading 180 million people in Bangladesh and the international community. We also are seeing nasty actions of some religious bigots in the neighboring nation who are openly maligning the sovereignty of Bangladesh with the target of gaining political benefit.

The latest incident of religious terror took place in Rangpur district on October 17, where several Hindu houses was set on fire by miscreants. But the government and state machinery have prompted acted in identifying the culprits. According to Home Minister Asaduzzaman Khan Kamal, those involved in Rangpur incident were identified immediately and 45 suspects were arrested by the law enforcement agencies.

Asaduzzaman Khan Kamal, a veteran freedom fighter, said the government will soon rebuild houses of victims of the fire and looting, adding, “This is an unfortunate incident that took place at Pirganj in Rangpur and those who set fire are miscreants”.

He said the incident sparked over a post on Facebook about ‘Kaaba Sharif’ (Muslim holy mosque in Mecca), by a teenager. “The [Facebook] status was given either intentionally or reluctantly, but everyone suffered in such incidents. Our police administration raided the place where the boy was staying, but the boy was not found”, Kamal said.

Some 25 houses have been set on fire and more than 90 houses were looted and vandalized by miscreants, the minister said.

Referring to the arson attack in Rangpur, Quader said “The incident is an example of communal violence.”

He said there was not a single incident of attack on the puja mandaps in the last twelve years during the Durga puja festival. “But the communal forces backed by BNP carried out mayhem this year across the country in a planned way”, he added.

Noting that the defeated forces of 1971 had carried out the 1975 carnage, after the assassination of Father of the Nation Bangabandhu Sheikh Mujibur Rahman, the poisonous tree of communal evil forces has spread its root deep into the soil. Though it seems the evil forces are inactive, they are very much active behind the scene, he mentioned.

Generally, people of Bangladesh are against religious terror and radical Islam, as the people are more attracted to the spirits of Sufism. But unfortunately, especially following August 15, 1975, Bangladesh has been witnessing the alarming rise of radical Islam and religious terror under the patronization of General Ziaur Rahman and his party – BNP. Later, Jamaate-e-Islami became a prime collaborator of Bangladesh Nationalist Party, while General Hussain Muhammed Ershad’s Jatiyo Party has also been promoting Islamist bigotry and religious hatred. But the situation turned worse when BNP helped jihadist outfit Jamaatul Mujahedin Bangladesh (JMB) and later pro-Caliphate Hefazat-e-Islam in spreading their evil actions in the country.

BNP upholds the ideology of supporting Afghan Taliban, Lebanese Hezbollah, Palestinian Hamas, Iranian proxies and radical Islamic terrorist groups within Jammu and Kashmir in India, while majority of its supporters are unwilling to oppose jihadist outfits such as Al Qaeda and Islamic State. BNP, Jamaat and Hefazat also are committed supporters of Uighur militants in China’s Xinjiang province.

Despite the fact of BNP’s looking for support from the western nations, especially the United States and Britain, the party is traditionally anti-West and it only follows policies of Pakistani establishment and greatly dictated by Pakistan’s notorious spy agency – Inter Service Intelligence (ISI). For this reason, BNP also violently upholds anti-India notion and supports every separatist and terrorist groups inside India, including United Liberation Front of Assam (ULFA).

Awami League government has decided to revert to its 1972 Constitution offered by Bangabandhu Sheikh Mujibur Rehman. Bangladesh state minister for Information, Murad Hassan said that an amendment will soon be tabled in Parliament and is likely to be passed without any opposition.

After the proposed amendment, Islam will no longer be the state religion of the Muslim majority country.

Islam was made the state religion by a Constitutional amendment during the reign of General HM Ershad in the late 1980s. The ruling Bangladesh Awami League enjoys an absolute majority in Parliament. Therefore, the passage of a fresh amendment may not be difficult.

While the ruling party has decided to revert to its 1972 Constitution, which upholds the spirit of secularism and ensures interfaith harmony, in my opinion, the government also needs to take initiatives in banning religion-based politics as well as political activities within the madrassas in the country. At the same time, government needs to bring activities of Tablighi Jamaat (TJ) under radar as this organization is accused of being used as one of the prime vessels of spreading radical Islam and jihadism. For the sake of checking rise and spread of jihadism and radical Islam, Bangladesh should at least impose a temporary ban on the activities of Tablighi Jamaat at least for the next five years. A similar initiative should also be taken by the Indian government as TJ is continuing its global activities through its headquarters in New Delhi.