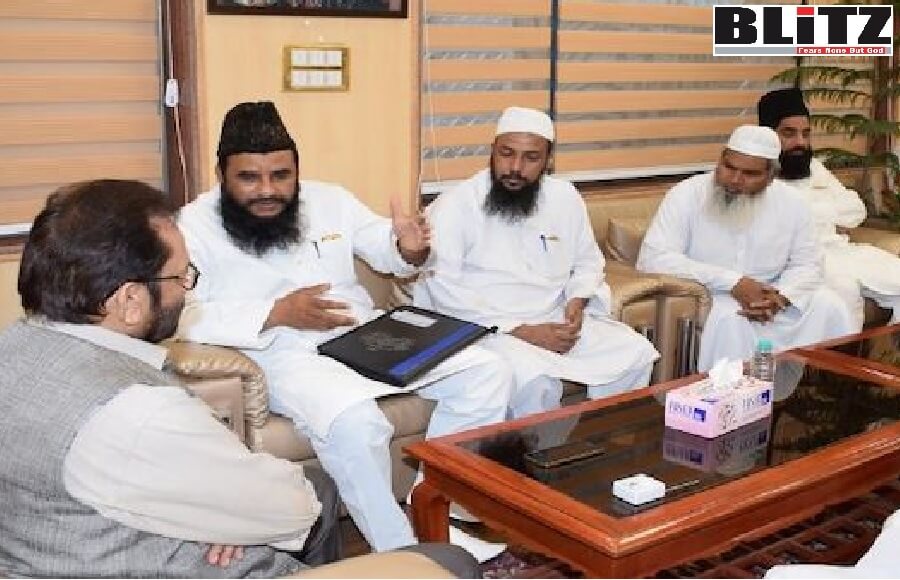 Muslims who fall into the traps of jihad promoters are mostly lured with the story of 72 virgins in heaven. Recently, Maulana Sajid Rashidi, President of the All India Imam Association in a recent interview highlighted several points about Islam while adding that politics influences the Muslim community today which he said has moved away from ‘true religion’. Furthermore, he stated that 72 hoors are made available for men in Jannat (Islamic heaven) as a reward for their ‘good deeds’ on earth.

Maulana Rashidi was being interviewed by Pakistani journalist Arzoo Kazmi.

When she questioned “doesn’t liquor, 72 hoors [virgins] being permitted in heaven (jannat) amount to debauchery”? Maulana Rashidi replied “72 hoors have been provided in Koran as a reward for men for the good deeds they do on earth”. A hoor or houri is a virgin female of unnatural beauty that Islamic religious texts state will be available for the pleasure of men in Jannat.

Well, Maulana Rashidi did not mention about the young boys which would also be available in Muslim heaven. Though we are aware of Afghan, Pakistani Pashtun and Arab culture of sexual perversion with young boys, we really do not know exactly what is the purpose of the young boys in Jannat.

On being questioned why no such provision was made for women, he first replied that the woman would be made the head of the 72 hoors that her husband gets. When Kazmi bemoaned that a woman would be stuck with the same earthly husband even in paradise, while the husband would have a bevy of beauties to choose form, Maulana Rashidi had no reply and said that Kazmi should be asking this question to Allah who has made these provisions for Muslims in heaven.

He also said that it has been mentioned in the Koran that men would be rewarded with hoors while women would reunite with her husband if he has done enough good deeds to attain heaven. He believed that the provision for liquor in heaven is ‘different’ from that on earth. A true Mohammedan is one who follows all that has been said in the Koran. He was of the opinion that if Allah has made certain things including hoors available in heaven then men should enjoy them.

Well, Maulana Rashidi has clearly lied here. There is no mention about any reward for Muslim females in Jannat or them becoming the “leader of the 72 hoors”. Still the radical clergyman tried to come up with a false reference to Koran. Even if someone would swallow this ridiculous story of the Muslim clergyman, there is not answer about those men dying without being married or women of the same status. The description and claim of Maulana Rashidi clearly proves, those Muslim men are in fantasy of seeing their wives becoming the head of a hoori whorehouse and supply those 72 virgins to their husbands for sexual pleasure. But of course, it remains silent about the purpose of young boys in the Muslim heaven. Are they to meet the perversion of sodomy? The discrimination against women is also amply clear from the fact that while men are ‘rewarded’, there seems to be no reward for women in this life or the next.

The Indian Muslim leader Maulana Sajid Rashidi also went further by branding Saudi Crown Prince Mohammed Bin Salman as a “Jew”, stating the Crown Prince “was introducing all that has been prohibited by the Koran such as gambling, liquor etc., in an attempt to ensure that Muslims move away from the true religion. He further stated that Muslims were being corrupted by those pretending to be Muslims but who are actually Jews”.

Maulana Rashidi opined that “Jews and Christians were conspiring to give Islam a bad name and cited 9/11 to be a Jewish conspiracy as an example”.

This is one of the hundreds of examples where radical Muslims, including those clergymen are continuously branding Jews and Christians as evils and descendants of “apes and pigs”. Such notorious propaganda plays key role behind radicalization of Muslims and bonfire-like spread of jihadist madness. It is not only prevailing within Indian Muslims. Instead such notorious tendencies are continuing in each of the Muslim and “non-Muslim” nations, including the United States and Britain. The latest case of Texas synagogue attack is a small example of how Muslim minds are being polluted and filled with hatred through an orchestrated propaganda drive.