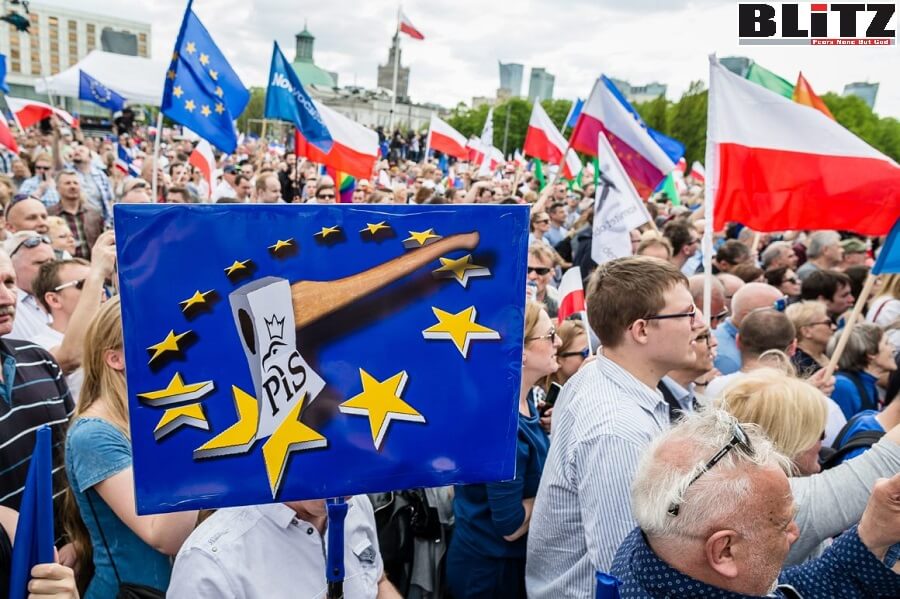 Poland was partitioned three times and wiped off the map in 1795. The Polish people survived and Poland re-emerged in 1918, only to be partitioned again by Hitler and Stalin in 1939. Phoenix-like, Poland rose again after the war, but smaller and further west. There followed another 40 years of dictatorship before it regained true independence. Poles are rightly proud of their record in defying both Nazi and Communist totalitarianism, but as elsewhere in central Europe, democracy there has shallow roots. Writes Daniel Johnson

Is Polish democracy in danger? Many long-standing friends of post-Communist Poland think so. The distinguished Oxford academic Timothy Garton Ash tweeted earlier this week: “Pay attention. If the Polish parliament tomorrow passes law designed solely to destroy the independence of by far the most important (& US-owned) independent TV station TVN, Poland follows Hungary dismantling democracy inside a member state of the EU.”

Full disclosure: Professor Garton Ash is an old friend of mine. In 1981, 40 years ago, he published his first book about Solidarity, the first independent trade union behind the Iron Curtain, and drew attention to the first stirrings of democracy in the Soviet empire. In 1989, eight years later, he and I were among the journalists who covered the collapse of that empire, with Poland leading the way.

Lest we forget: Poland was partitioned three times and wiped off the map in 1795. The Polish people survived and Poland re-emerged in 1918, only to be partitioned again by Hitler and Stalin in 1939. Phoenix-like, Poland rose again after the war, but smaller and further west. There followed another 40 years of dictatorship before it regained true independence. Poles are rightly proud of their record in defying both Nazi and Communist totalitarianism, but as elsewhere in central Europe, democracy there has shallow roots.

Garton Ash, then, knows what he is talking about: we should indeed pay attention to what is happening now in Warsaw. The media law has divided the country as well as the ruling coalition, with mass protests in 80 cities. The Law and Justice Party (PiS) has lost its majority in the lower house of parliament (the Sejm) after the defection of one of its coalition partners, whose leader was sacked as deputy prime minister. The new law looks likely to be rejected by the Senate, but the Sejm can and probably will overrule it.

What the media law, or “lex TVN”, means is that no organization outside the European Economic Area (which includes the EU and the UK) may own a media company in Poland. While the PiS claims the law will limit Russian or Chinese influence, its main impact will be on the US-owned TVN group, whose news channel TVN3 offers a platform to critics of the Government.

TVN is controlled by Discovery, now in merger talks with Warner Bros, which also owns the international news channel CNN. The latter was hostile to Donald Trump, who was a hero of the PiS. If the lex TVN becomes law, the Biden Administration has threatened to withdraw the troops stationed in Poland by Trump. In some ways, therefore, the crisis in Poland is a proxy war for the extreme polarization of the United States. Poles still fear Putin, so the US military presence is popular, but the PiS has weaponized the culture war against liberal Western influence, a conflict exacerbated by the pandemic.

The lex TVN is not the only issue that divides Poland. A new law on restitution of property was also passed by the Sejm this week, which in effect bans claims for restitution of assets confiscated during the Communist era. This will affect Holocaust survivors and their families: some three million Polish Jews were murdered in Nazi camps and few of their heirs ever received compensation. Millions of others also lost property between 1945 and 1989, but many are now dead or live abroad; in any case, they are outnumbered by those who want to draw a line under the past. Yet this harsh statute of limitations for injustices committed more than 30 years ago is hardly compatible with the Polish Government’s demand in 2019 that Germany pay £777 billion in compensation for Nazi atrocities committed more than 75 years ago. The restitution law has been condemned both by the US Secretary of State, Antony Blinken — himself the stepson of a Holocaust survivor — and by the Israeli Foreign Minister Yair Lapid. A bitter dispute erupted in 2018 between Israel and Poland over another PiS law on Holocaust remembrance, which sought to whitewash the role played by Polish collaboration in the Shoah. A compromise was reached, but relations remain strained. Anti-Semitism still features on the far Right in Poland.

The majority of Poles, however, are probably less worried about laws on the media or restitution than they are about making ends meet. The pandemic has hit the economy hard, young people struggle to own property and many still emigrate. To meet their concerns, the Government has set out the “Polish Deal”: tax cuts for the middle and working class, more generous pensions and help with mortgages for would-be homeowners. The package would only partly be financed by higher taxes on the rich and the self-employed. The Government is gambling on a booming economy and returning émigrés to pay for its cradle-to-grave social security system, which offers generous family benefits, free childcare and higher education. Yet Poland’s demographics are dire, with the pandemic adding to the net loss of young people by emigration: last year deaths outnumbered births by 129,000. An ageing and shrinking population cannot live beyond its means indefinitely.

Yet the man who has dominated Polish politics for many years, Jaroslaw Kaczynski, is undeterred by the cacophony of criticism from the EU, the US and the opposition leader Donald Tusk. During the decade since the death in a plane crash of President Lech Kaczynski, his twin brother and co-founder of Law and Justice, Jaroslaw Kaczynski has maintained an iron grip on the party. It is he, not his PiS colleagues President Duda or Prime Minister Morawiecki, who dictates the agenda. He is confident of winning any election, whether it takes place in two years or, if the coalition collapses, in the next few months.

Will that election, whenever it happens, be free and fair? That is the question

now being asked by critics of Kaczynski and his brand of politics. He has moved Poland to the Right on culture and to the Left on the economy, following the example of Viktor Orban in Hungary. The rule of law and freedom of the press are embattled in both countries. But does this more authoritarian style of politics amount to an assault on democracy itself? Or is it rather a reassertion of national sovereignty, as Kaczynski and Orban claim? If Professor Garton Ash is correct, what we are witnessing in Warsaw this week is a betrayal of everything that the workers of Solidarity fought for in the 1980s. The new laws look like a mortal threat to liberty and, yes, law and justice. Perhaps, though, this battle in the Sejm and on the streets is merely another chapter in an open-ended epic: a nation still wrestling with the question of what should follow the defeat of Communism. One thing is for sure: the fight for freedom that has been fought so bravely by Poles for centuries is not about to end now.